Etymology. The specific epithet of this species is derived from Latin, aurum meaning ‘gold’, balteatus meaning ‘girdled or belted’, pertaining to golden belts of its coloration pattern.

Coloration of holotype in preservative. Dorsal pattern of distinct alternating purplish-brown and creamy-white bands continues on to tail, a series of brown spots in each whitish band, three sets of such alternating bands between limb insertions and one across sacrum. Dorsal pattern faded on flank, original portion of tail distinctly brown and whitish cream segmented, regenerated portion brown, distalmost part of tail very pale. A prominent brown, postocular stripe with a white upper edge from posterior border of orbit through ear; connected to postocular stripe of other side by a brown spot on nape. Dorsum of head pale brown with whitish posterior edge and symmetrical dark brown markings on posterior portion of head. A light line bordering the nape band extends from posterodorsal border of orbit and on to occiput. Limbs brown, marked by irregular white markings. Venter cream to beige.

Variation. The paratypes resemble the holotype in all aspects of morphology, except that both paratypes have a prominent complete brown collar with darker margins incorporating the postocular stripes; the female paratype, THNHM 15902, lacks both precloacal and femoral pores. Color of the regenerated tails of holotype and male paratype, CUMZ-R-2009,6,24- 1, purplish-brown compared to purplish-brown with creamy-white banding of the complete tail of female paratype, THNHM 15902.

Comparisons. We compare the new taxon to species currently known from Thailand and neighboring Laos, Myanmar and Cambodia. Table 2, modified from Rösler & Glaw (2008), presents important characters of each species in the region.

Cyrtodactylus auribalteatus  sp. nov. can be distinguished from other species in the region by absence of precloacal groove versus presence in C.rubidus (Blyth)  and C. pulchellus  ; from C. thirakhupti  by the presence of precloacal pores; from C. angularis  , C. ayeyarwadyensis  Bauer, C. brevidactylus Bauer  , C. gansi Bauer  , C. intermedius  , C. khasiensis  (Jerdon), C. oldhami  , C. papilionoides  , C. peguensis  , quadrivirgatus  , C. sumonthai  and C. wakeorum Bauer  by the presence of femoral pores; from C. chanhomeae  , C. consobrinoides  (Annandale), C. feae (Boulenger)  , C. jarujini  and C. variegatus  by the presence of a diastema between the series of femoral pores and precloacal pores; from C. aequalis Bauer  , C. buchardi David et al.  and C. slowinskii Bauer  by the presence of greatly enlarged subcaudal plates at least in the original tail; and from C. brevipalmatus  and C. interdigitalis  by the absence of a denticulate tail margin. It may be distinguished from C. consobrinus  by much lower ventral scales count, 38–40 versus 65–70. It may be distinguished from C. erythrops  by much higher ventral scales count, 38–40 versus 28. It may be distinguished from C. annandalei Bauer  , C. chrysopylos Bauer  , and C. tigroide  s by its higher number of dorsal tubercular scale rows, 22–24 versus 18 or less; and from C. russelli Bauer  by a lower number of precloacal pores, 6 versus 15.

Distribution and Natural History. Cyrtodactylus auribalteatus  sp. nov. is currently only known from Phra Wang Daeng Cave in Thung Salaeng Luang National Park, Phitsanulok Province, northern Thailand. Phra Wang Daeng Cave is situated in densely wooded limestone karst. It is the longest cave system in Thailand with major passages as long as 13 km. The underground system includes a perennial stream that supports three species of troglobitic fishes, Schistura speciesi Vidthayanon & Kottelat  , S. deansmarti Vidthayanon & Kottelat and Neolisocheilus  subteraneus Vidthayanon & Kottelat, that are endemic to this system ( Vidthayanon & Kottelat 2003). The only other reptile found in the area by the survey team during three visits was Dixonius siamensis (Boulenger)  , which was found foraging on the ground outside the cave. This area is characterized by extensive karstic formations and there are many other caves in the vicinity. We are certain that more populations of the new taxa will be discovered in the near future. 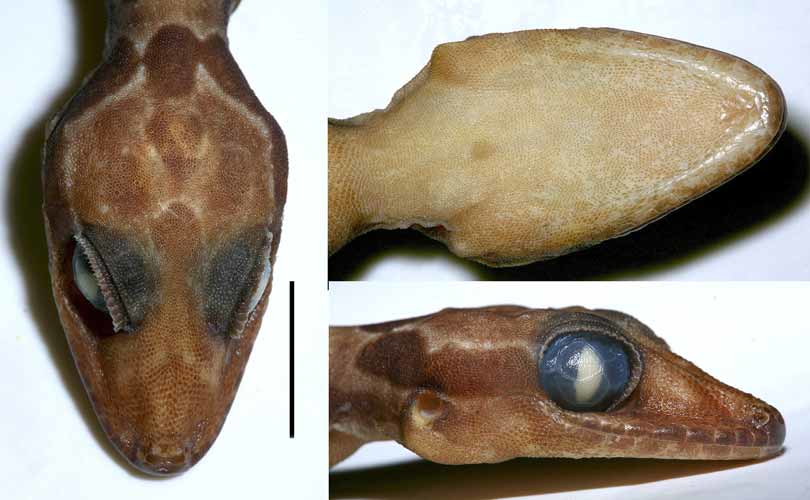