Description. ( Fig. 54View FIGURE 54 a) Massively encrusting, with low lobes, each crowned by a central oscule. Size of specimen 3.5 x 2.5 x 1 cm, but it appears to be a fragment. Color light beige in alcohol, both outside and inside. Surface smooth. Lobes about 1.5 cm in diameter, oscules up to 7.5 mm in diameter. Consistency firm but compressible.

Skeleton. At the surface there is the usual crust of aspidasters covered by a dense mass of microrhabds, and carried by the cladomes of triaenes. Choanosome with bundles of fusiform oxeas.

Etymology. The species is named after the country Suriname.

Remarks. Only a few other Central West Atlantic Erylus  species have been reported to possess dichotriaenes: E. diminutus Mothes, Lerner & Silva, 1999  and E. soesti Mothes & Lerner, 2001  . These species are dissimilar to the new species because they only have dichotriaenes, not also plagio- or orthotriaenes. E. diminutus  , from 183 m off SE Brazil, nevertheless has many features in common: shape, color in alcohol, general dimensions of the megascleres, microrhabds and aspidasters. Differences with the above-described specimen are the apparent lack of differentiation in smaller and larger oxyasters (only a single category of 11–23 µm is present), and the oxeas are strongylote, and on average considerably smaller and thinner. It will have to be demonstrated how these features are variable among individuals.

Erylus ministrongylus Hechtel, 1965  , from shallow-water in Jamaica, has both orthotriaenes and dichotriaenes, like the present species, but the oxeas are strongylote (like E. diminutus  ), and only about half in length compared to the new species. Aspidasters are very variable, 87–181 x 43 –87 µm, but clearly smaller than in the present new species. Microrhabds and asters appear similar, at least in sizes and ray number.

Erylus transiens ( Weltner, 1882)  (as Stelletta  ) is described as having predominantly orthotriaenes, but it has also triaenes with ‘gespaltenen Zinken’ (Weltner, p. 46, third paragraph, translated here as dichotriaenes). The single category of oxyasters measures on average 16 µm and is said to be smooth. The species is apparently close, but is different from the new species in these characters.

The presence of about one third of smooth aspidasters is difficult to weigh as a discriminating feature of the present specimen, as there is no previous report of such high occurrence of abnormally developed aspidasters. These smooth aspidasters are definitely not juvenile forms of the normally ornamented aspidasters, because such juvenile forms are smaller than the adult spicules and are characteristically provided with a surface ornamentation of radiating ribs and grooves, testifiying of the original euaster ancestry of this spicule type. Both in SEM and in light microscopy there is no trace of these ancestral aster features, the surface is entirely smooth and transparent through and through. Possibly it is related to the silica content of the environment, close to terrestrial runoff, but these smooth aspidasters have only rarely been observed in other species of Erylus  on the Guyana shelf, and only explicitly by Von Lendenfeld in his monograph of the Pacific Erylidae, e.g. in E. sollasii Lendenfeld, 1910  (his pl. II figs 15 and 22). Von Lendenfeld (l.c.) thought these are juvenile spicules, but described further juvenile aspidasters as provided with radiating ribs. The high frequency observed in the present specimen was not observed by Von Lendenfeld. Recently, Sim-Smith & Kelly (2015) reported smooth aspidasters without any ornamentation or ribs in their species Erylus fallax  , naming these juveniles, but they appear to be of the same size and shape as the ornamented aspidasters. 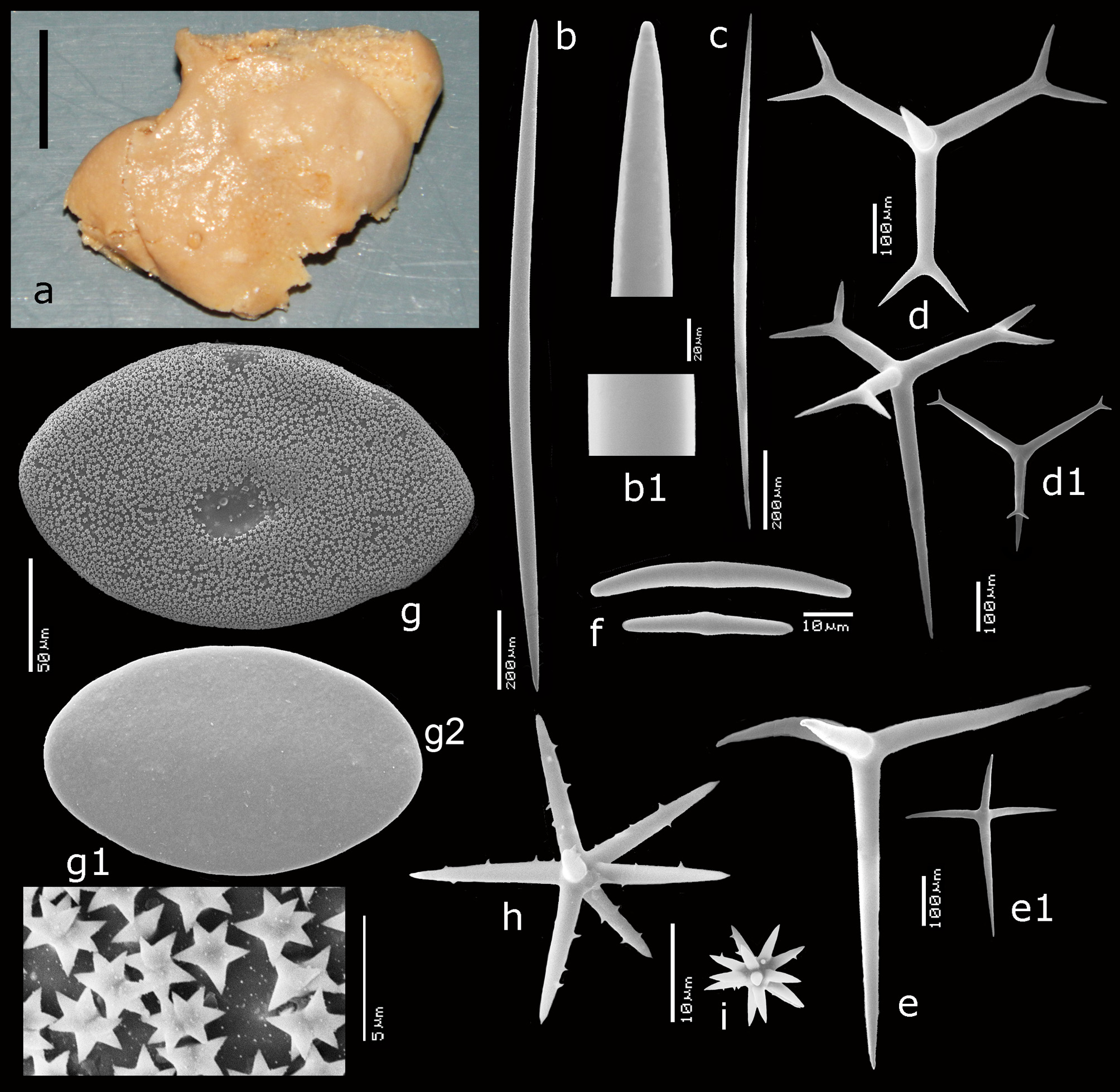 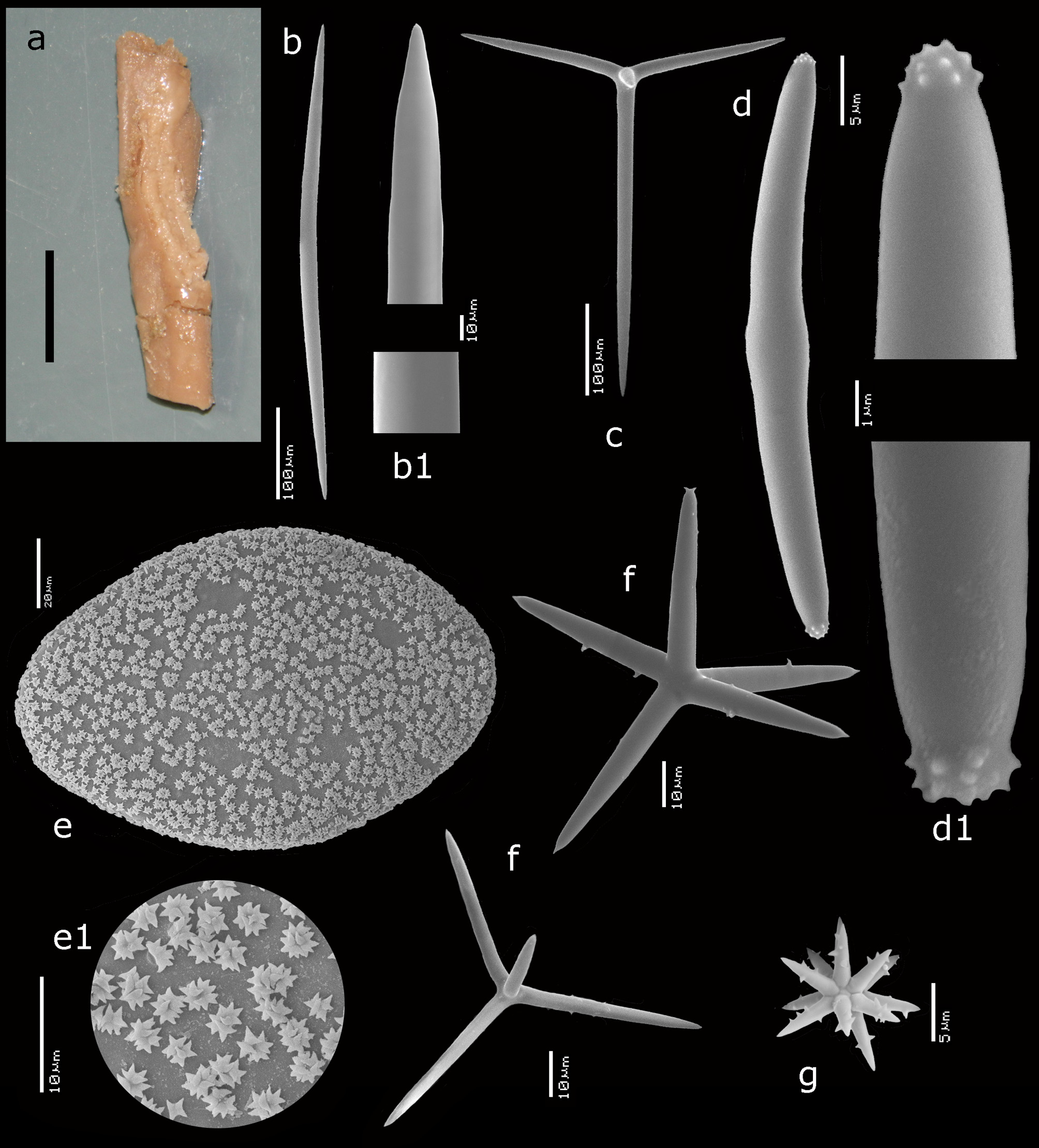