Description. ( Fig. 74View FIGURE 74 a) Sponges buried in a shelly-stony substratum, the body only detectable by the presence of long, whitish, semi-transparent papillae sticking out far beyond the surface. Body 6 x 4 x 2 cm; papillae 2–4.5 cm long, flattened in preserved condition, 4–8 mm in diameter, rounded ends mostly closed, but occasionally the end is open.

Skeleton. The main body has a rather confusedly arranged skeleton with individual spicules and some vague bundles carrying the surface debris. The skeleton of the papillae in cross section ( Fig. 74View FIGURE 74 b) consists of an outer palisade of tylostyles, the smallest megasclere category, 100–200 µm in thickness, erected upon a 100–200 µm thick layer of tangentially arranged intermediate styles. The inner skeleton of the papillae consists of longitudinal bundles of subtylostyles, oval in cross section and consisting of about 40 spicules each, diameter varying from 400–700 µm.

Remarks. This identification is made with some hesitation. The species has been reported over a large area of the North Atlantic, including the Azores, Western Europe, and West Africa, and from depths of 15–800 m (Boury- Esnault, 1987). The common feature for all the records is the cover of debris of the surface of the sponge in combination with few transparent papillae. Variation of spicule sizes and depth, added to the widespread records, indicate a possible complex of species. Among all the records of the species, the above described specimens stand out by the much longer papillae, length up to 4.5 cm against an average of 1–1.5 cm in the other records. Ridley & Dendy’s (1887) material from 800 m off the Azores had papillae of 1.3 cm in length, and had longer subtylostyles (up to 1200 µm, against up to 978 µm in the present material).

The present specimens appear closest to Lévi’s (1960) description of the species from Senegal: subtylostyles 475–1000 µm, intermediate styles 200–400 µm, and tylostyles 80–120 µm. The Senegal material originated from 25– 30 m  . More to the south, Burton (1956) reported the species from 32–55 m off Sierra Leone, but he did not provide a description other than that there were several specimens of typical form.

Polymastia  species from NE Brazil and the Caribbean are P. janeirensis ( Boury-Esnault, 1973)  , P. nigra Alcolado, 1984  , P. tenax Pulitzer-Finali, 1986  and P. fordei Lehnert & Van Soest, 1999  . These species differ significantly in shape (no cover of debris, shorter papillae and differences in spicule sizes). The type of P. janeirensis  , originally described unrecognizably by Boury-Esnault as Suberites  , but subsequently emended (Boury- Esnault et al. 1994), has been pictured by Muricy et al. 2011: fig. 9b, and this shows the absence of debris on the surface and the clearly different size and color of the papillae. 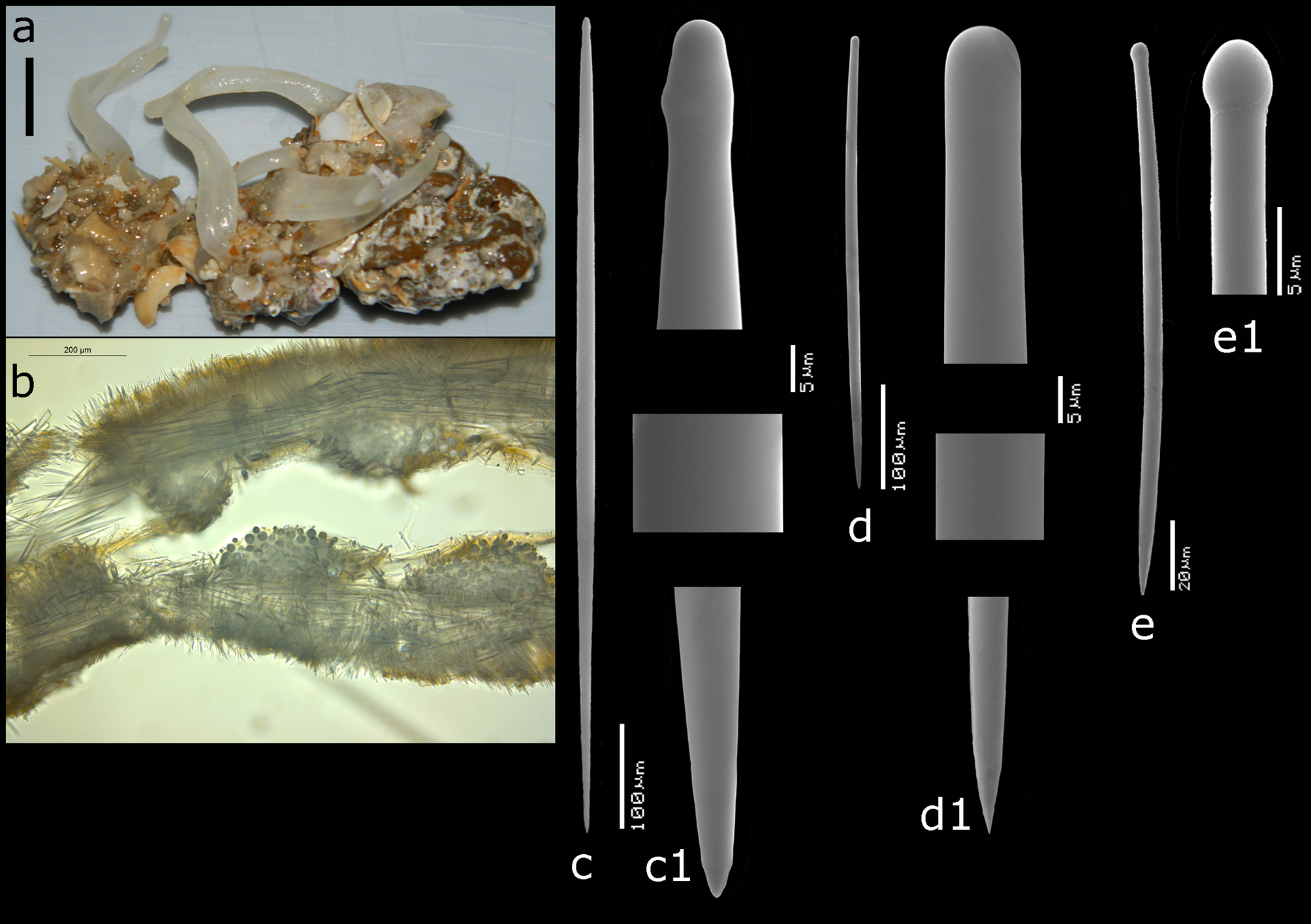