Notochaetae nearly as stout as neurochaetae; often entirely broken off (observed on only 7 parapodia in holotype), few (about 6 per ramus observed in holotype); very long (exceeding the length of neuropodial acicular lobe) ( Fig. 14AView FIGURE 14); with smooth, translucent basal half of shaft ( Fig. 14CView FIGURE 14); with obvious rose-bush like alternating and interlocking spines on one side only in distal half of shaft ( Fig. 14DView FIGURE 14), distal tip of notochaetae smooth and blunt ( Fig. 14 E, FView FIGURE 14). Neurochaetae short to very long, numerous, translucent, of two forms: either wide and flattened with shallow denticles on both sides throughout most of their lengths ( Fig. 14BView FIGURE 14) or slender, with rounded tip, with distinct rows of dense alternating denticles on both sides (few present and easily overlooked) ( Fig. 14BView FIGURE 14, marked by arrow).

Additional morphological observation: Macellicephala gloveri  sp. nov. was represented by 11 specimens in total. While DNA was successfully extracted from all specimens, confirming their identity, their morphological state was often rather poor. For example, the style of median antenna and dorsal cirri are missing in all available specimens. Tentacular styles are missing in type specimens but remained attached in three DNA vouchers: NHMUK.2018.9352 and NHMUK.2018.1463 (on right side only, in both specimens) and NHMUK.2018.855 (on left side only). When the tentacular cirri were observed these were smooth, very slender, both of equal length to palps. Length of palps appears to be variable as these extend to segment 9 in holotype, but are shorter (extending to segment 5) in most DNA voucher specimens, appearing shortest (extending to segment 3) in only 8 mm long DNA voucher specimen NHMUK.2018.9352. Finally, in DNA voucher specimen NHMUK.2018.855, single very small and easily overlooked elytra remained attached on segment 5 (left side only) ( Fig. 8CView FIGURE 8). Elytra are translucent, with smooth margins and sparsely covered by few microtubercules when observed under light microscopy.

Remarks. Semi-circular to circular dorsal and parapodial ridges described in Macellicephala gloveri  sp. nov. and a closely related species from the Amundsen Sea M. linseae  sp. nov., can also be also found in M. aciculata Moore, 1910  . Pettibone (1976) did not re-describe this character in detail; hence a type specimen of M. aciculata  ( USNM #1740) was examined, although it is in a very bad condition. The neuropodia of M. aciculata  are oblique, tapering into slender tip with protruding acicula medially forming prechaetal and postchatel lobes. The neuropodia of M. gloveri  sp. nov. are truncated, almost rectangular, with poorly developed prechaetal and postchaetal lobes. The stout notochaetae of M. aciculata  appear to possess spines on both sides but in M. gloveri  sp. nov. the alternating spines are confined to one side of the notochaeta only.

Based on morphological examination alone, the specimens from the Amundsen Sea were assumed to belong to one species. Subsequent molecular work [see Brasier et al. (2016)] revealed the presence of two distinct clades, suggesting presence of two species. Upon closer re-examination, some chaetal differences were observed in representatives of the two clades leading to erection of a second species as Macellicepala linseae  sp. nov. The chaetal differences are as follows (see comparative Fig. 15View FIGURE 15): notochaetae in M. gloveri  sp. nov. shaft is smooth, translucent while in M. linseae  sp. nov. it is straw-coloured and distinctly horizontally striated ( Fig. 15B and EView FIGURE 15). Further, notochaetae appear to be more numerous (~6), relatively slender and very long in M. gloveri  sp. nov. ( Fig. 15AView FIGURE 15), while in M. linseae  sp. nov. these are stouter, short and fewer in numbers (usually only one or two observed) ( Fig. 15DView FIGURE 15). Both species have two forms of neurochaete. The numerous, wide and flattened chaetae are very similar in both species. However, the additional few, slender neurochaetae appear to be different. In M. gloveri  sp. nov. the serration is more dense, while in M. linseae  sp. nov. the serration is more widely spaced (see Fig. 15C and FView FIGURE 15). As with notochaetae, neurochaetae are more numerous in M. gloveri  sp. nov. Unfortunately, chaetae are susceptible to damage in both species and notochaetae in particular are often completely broken off, complicating the differentiation between these species. The differences observed are subtle and require careful observation but can be detected when specimens in good condition are available. It is possible that additional characters may be derived from elytra, which have unfortunately not been preserved in any of the specimens of M. linseae  sp. nov. examined and only single observation of elytra was made for specimen of M. gloveri  sp. nov. 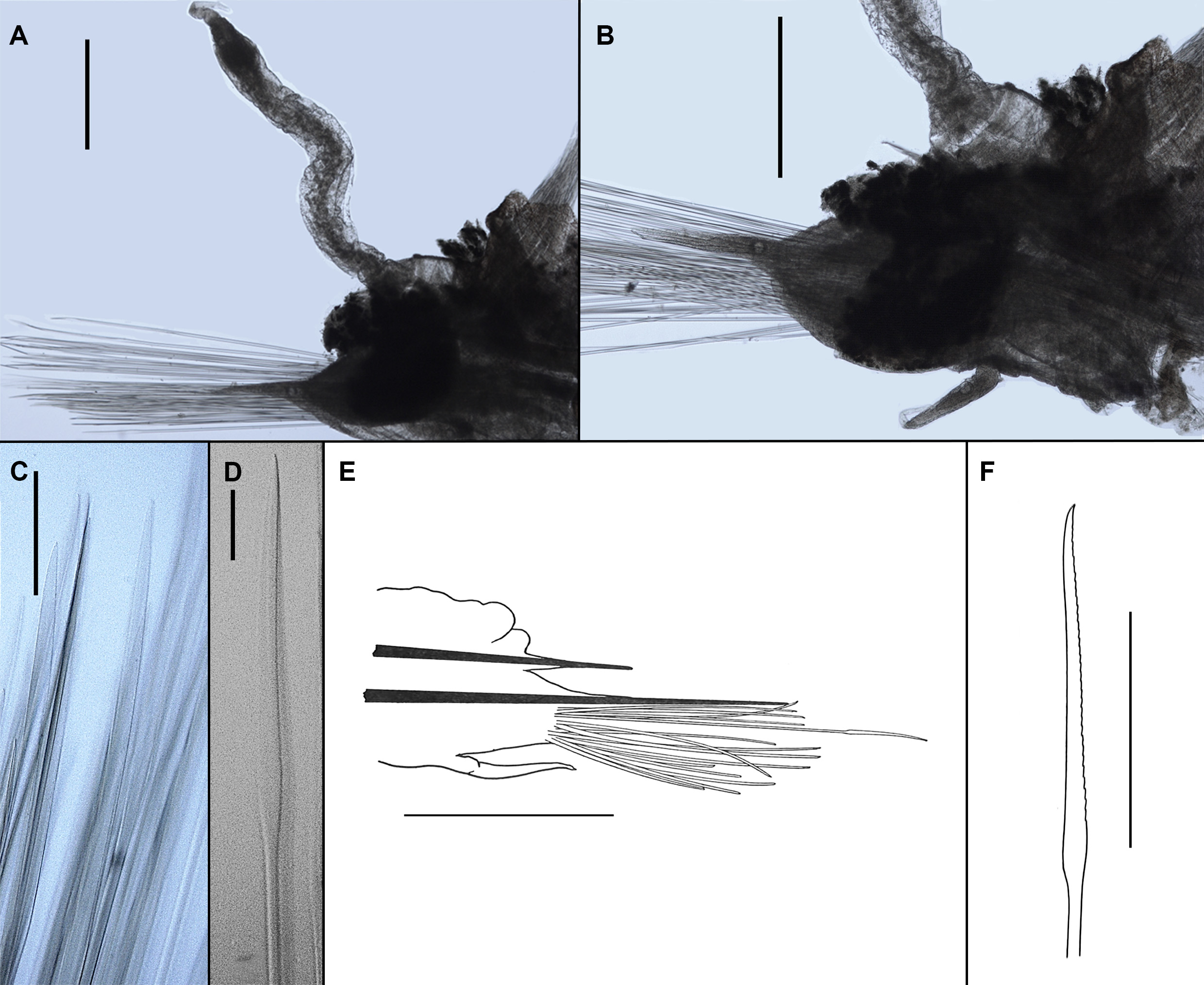 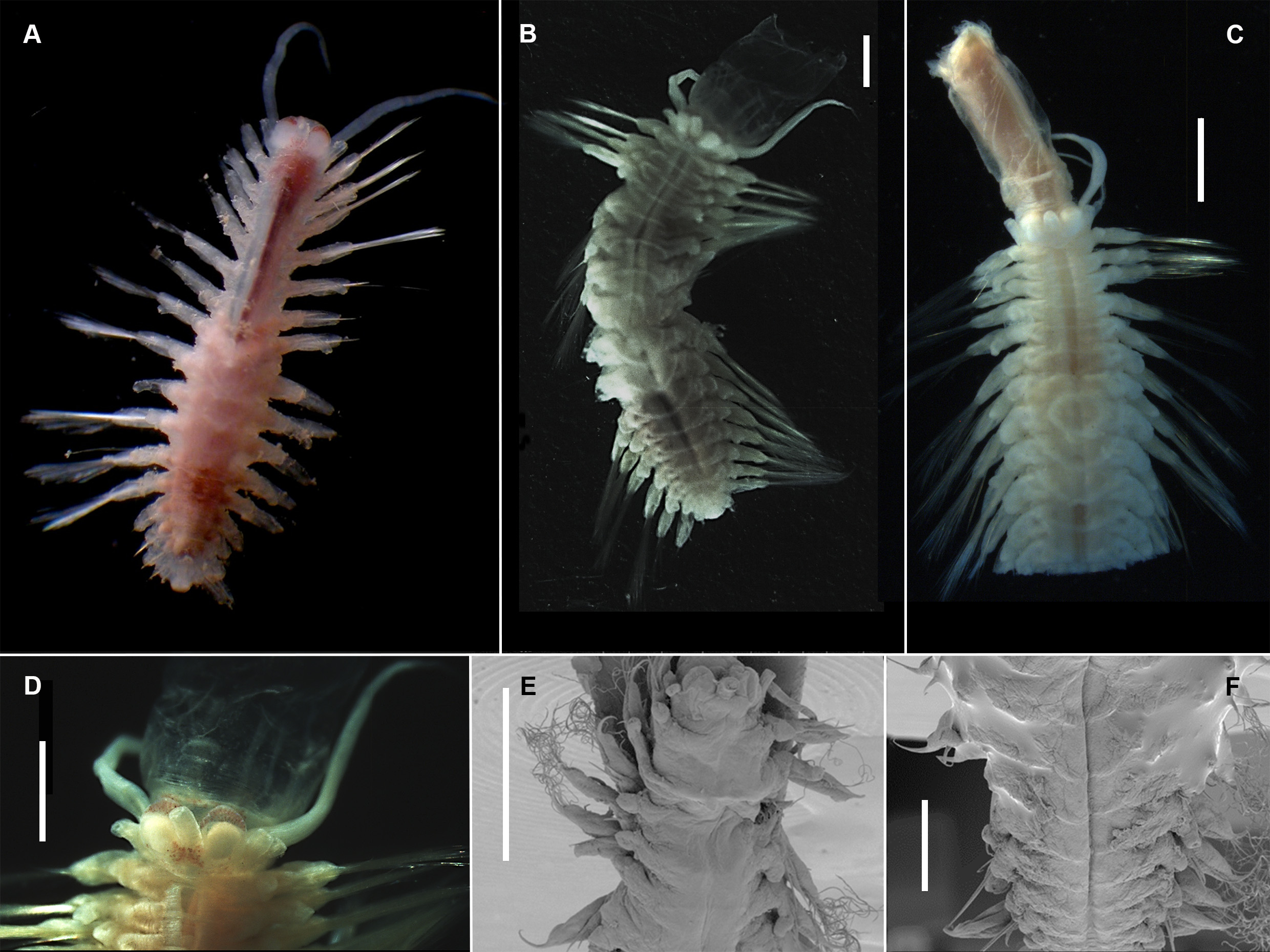 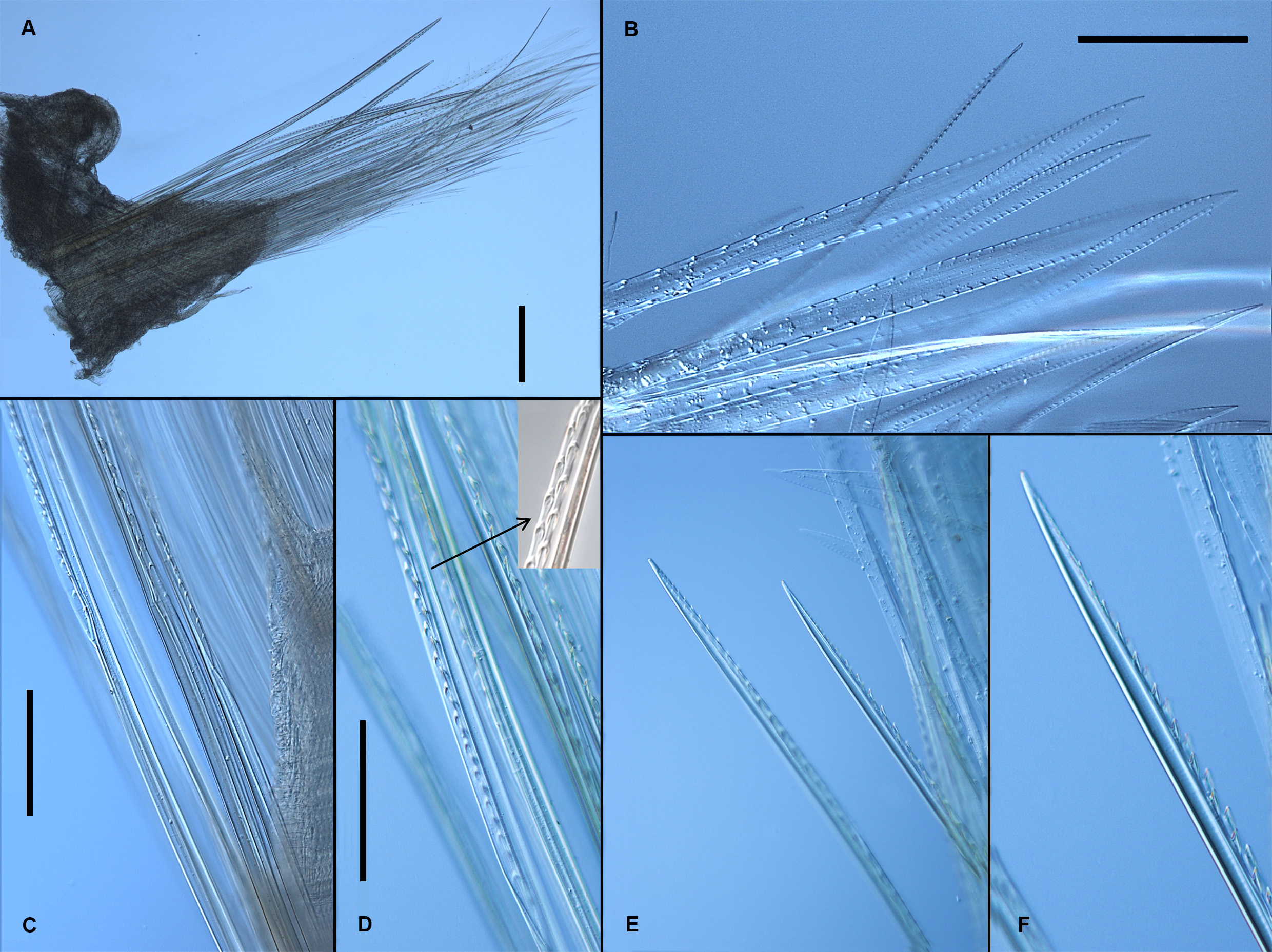 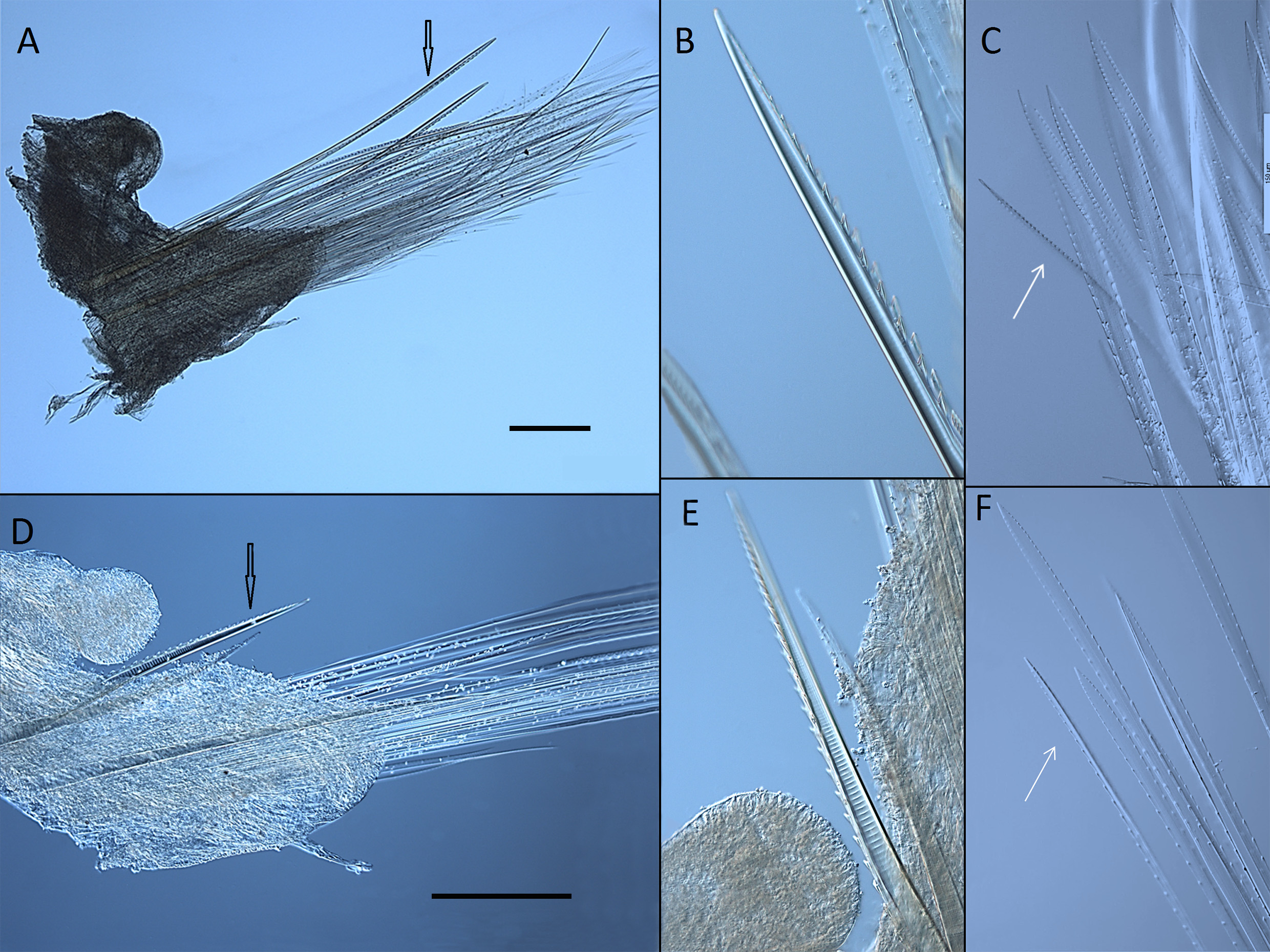