Cerbalopsis villosa Jézéquel and Junqua, 1966: 970  , figs 4–8 (description of male and female; 3 males, 10 females, juveniles, syntypes from Grand Erg Occidental [for notes on the type locality see below], MNHN, not found).

Note. In the original publication no exact type locality is mentioned. Grand Erg Occidental is a huge area with an extent of ca. 500 km (West-East) by 300 km (North-South). Jézéquel and Junqua (1966) mention a Solifugae  ( Othoes saharae  ) as potential competitor or predator of C. villosus  . In the cited work on this species (Junqua 1966) it is mentioned that studies were performed with the Centre de Recherches Sahariennes de Béni-Abbès as base for collecting and rearing. Therefore, in Fig. 173View FIGURE 173 the type locality was set close to this Centre.

Biology. Cebrennus villosus  builds vertical burrows as described in Jézéquel and Junqua (1966) as well as in Jäger (2000) according to observations in the lab. Figs 131–134View FIGURES 128 – 134 show different stages of this behaviour: the female carries sand from the ground of the burrow with their palps and chelicerae and specialised elongated bristles respectively, which latter build a basked to hold as much of the small-grained desert sand ( Fig. 131View FIGURES 128 – 134). The sand is deposited around the opening of the burrow in a distance of ca. one to three centimetres. When the spider goes again down to the burrow bottom it moves in a circle and strengthens the silken wall with new layers of silk ( Fig. 132View FIGURES 128 – 134). The special shape of opisthosoma fits into the circular cross section of the tube and the minimised crosssection dimension in order to save energy in these harsh environments. When closing the burrow with the silken lid sand is taken with the fourth leg to cover the silk by sand grains ( Fig. 133View FIGURES 128 – 134). The fourth leg is also the last one that pokes out of the burrow before it is definitely closed. Around the closed burrow characteristic radial marks of the leg movements are left behind ( Fig. 134View FIGURES 128 – 134). When the sand is blown away by the wind the top part of the tube is visible in the morning ( Fig. 147View FIGURES 147 – 151). When a tube is dug out the layered structure is recognisable ( Fig. 148View FIGURES 147 – 151).

The threatening behaviour was described in Jäger (2000). Fig. 130View FIGURES 128 – 134 shows a female from Tunisia in the lab, standing at its tiptoes raising the first pair of leg after it was tantalised in its cage. It never showed the flic-flac behaviour, described above for C. rechenbergi  spec. nov., neither in the field (Moldrzyk, personal communication) nor in the lab.

FIGURE 173. Distribution records of Cebrennus spp. (according to Jäger 2000 and references therein, this paper and Reimoser 1919). Note that the exact locality for C. laurae spec. nov. is unknown. 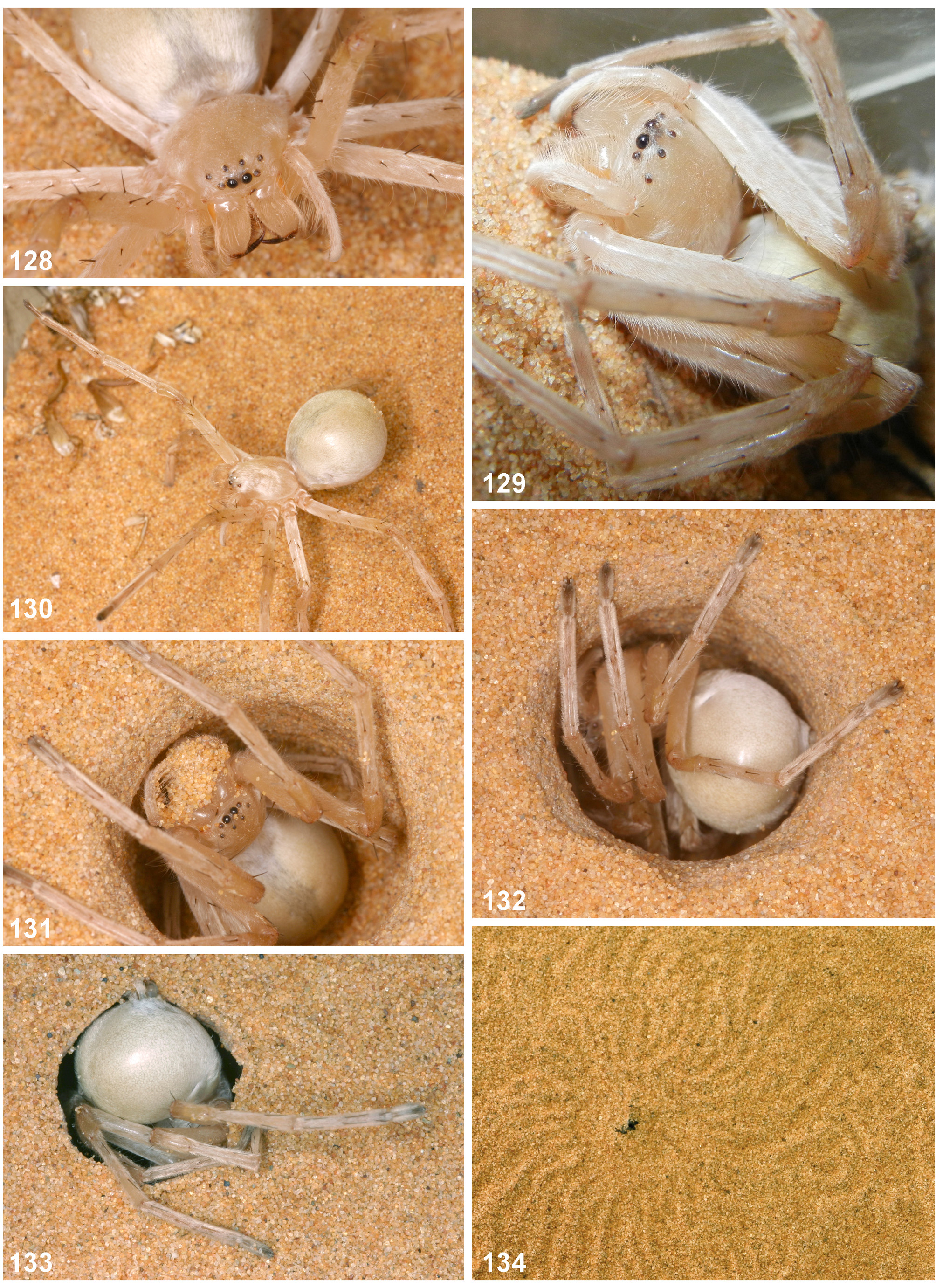 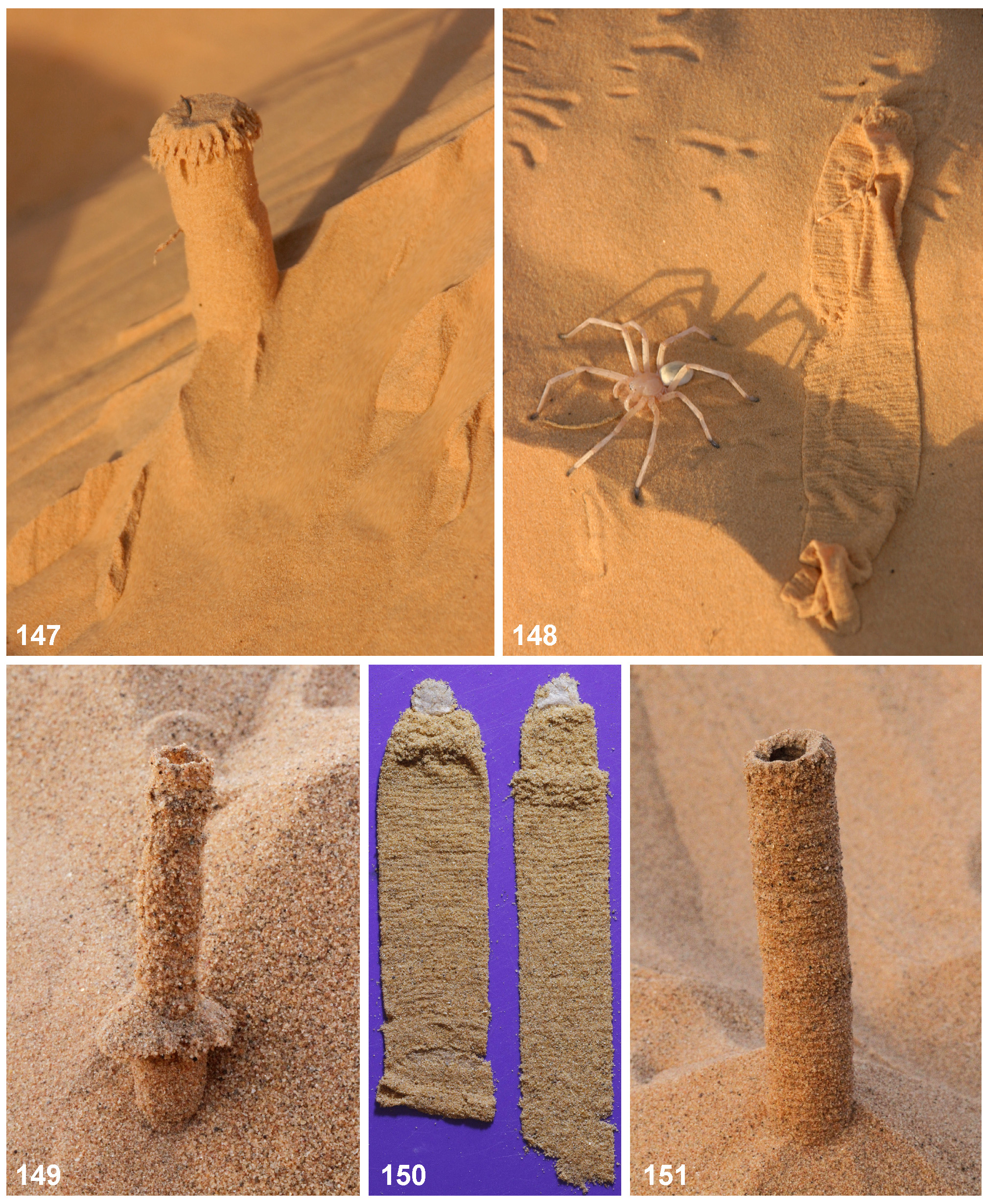