Diagnosis: External morphology —Small passerine birds similar in proportions to several “contopine” flycatcher genera (clade F 4 in Ohlson et al. 2008; Contopini in Tello et al. 2009), e.g. Lathrotriccus  and Empidonax  , but bill flatter and relatively shorter, barely longer then the surrounding rictal bristles, and with a much smaller distal hook. Distinguished from other species traditionally included in Myiophobus  by the combination of contrasting wing bars and pale panel on the distal two thirds of the secondaries, rich yellow to ochraceous underparts, and lack of streaking or flammulated pattern on chest and flanks. They are markedly distinct from other members of Hirundineinae, being less derived in both proportions and plumage pattern. They lack the unique colour pattern of Myiotriccus  and the long wings, weak tarsi and predominantly rufous plumage of Pyrrhomyias  and Hirundinea  .

The total length is 12.5- 14 cm ( lintoni  and ochraceiventris  ) or 9.5– 11 cm ( pulcher  ). Plumage predominantly olive above and yellow below, with orange ochre breast in ochraceiventris  and pulcher  ; head with prominent yellow to orange-red coronal patch (most prominent in males) and pale arched supraloral line and inconspicuous eye ring; wings and tail dusky to blackish with broad pale ochre to bright cinnamon tips of greater and median secondary coverts, forming two conspicuous wing bars; tertials and remiges edged whitish to pale ochre, except on the inner third of the secondaries, which forms a distinct blackish patch in the closed wing. Nephelomyias pulcher  differs from the other two by being smaller with a proportionally shorter tail. Interspecific variation in plumage coloration involves tone and richness in colour of underparts and wing markings, colour of the supraloral stripe and eye ring and degree of grey tinge on the head. Apart from this variation, N. ochraceiventris  has the ochre colour of the underparts extending over the sides of the head, and an all black bill (yellowish lower mandible in the other two); N. lintoni  has pale iris (dark in the other two species).

Anatomical characters — Cranial and syringeal material is only known for one species ( N. ochraceiventris  ), so a full evaluation of anatomical characters cannot be made for the genus. Furthermore, cranial and syringeal morphology in Tyrannidae  has been shown to be highly homoplastic ( Birdsley 2002; Ericson et al. 2006; Ohlson et al. 2008) and any of the individual character states below are found in some other tyrant flycatcher clade. However, at least N. ochraceiventris  shares with Myiotriccus  , Hirundinea  and Pyrrhomyias  the following unique combination of characters ( Lanyon, 1986, 1988a, 1988 b):

4) Bronchi separated by a calcified pessulus (found in many members of Rhynchocyclidae  , but absent

Nephelomyias ochraceiventris  further shares with Myiotriccus  a slightly elevated trabecular plate, resulting in a sagittal ridge at the ventral end of the nasal septum (typical of elaeniines) and the lack of a notch at the anterior end of the nasal septum. Neither of these character states is found in Hirundinea  , Pyrrhomyias  or any member of Fluvicolinae  , except Myiophobus phoenicomitra  and M. roraimae  .

Habitat and behaviour: Distinguished behaviorally both from the other members of Hirundineinae and from their former congeners in Myiophobus  by being more arboreal, inhabiting the canopy and subcanopy of humid montane forest. They forage for small arthropods (and possibly some fruit) by short sallies to air or foliage and by perch gleaning. Unlike other members of Hirundineinae, they usually travel in small groups which often accompany mixed foraging parties ( Poulsen 1996), a behaviour that sets them apart from most tyrant flycatchers outside Elaeniinae  ( Ohlson et al. 2008).

Distribution: All three species are restricted to humid forest in the Andes. Nephelomyias pulcher  has a disjunct range, with populations in the Andean cloud forests (1500-2600 m) of Colombia and northern Ecuador and in the yungas of Bolivia and southern Peru. Nephelomyias lintoni  and N. ochraceiventris  are sandwiched between the two populations of N. pulcher  , replacing each other in the upper montane and elfin forest (2200-3500 m) north and south of the North Peru Low.

Molecular data: Phylogenetic analyses based on DNA sequence data from three nuclear introns of 126 species of Tyrannidae  and allies show that Nephelomyias  species do not belong to Fluvicolinae  , where species of Myiophobus  are placed ( Fig. 1View FIGURE 1; Ohlson et al. 2008). Instead, they group with Myiotriccus  , Pyrrhomyias  and Hirundinea  , forming the small clade Hirundineinae that constitutes an independent deep lineage in Tyrannidae  . The relationship of this clade to Elaeniinae  , Tyranninae  and Fluvicolinae  is currently unresolved. 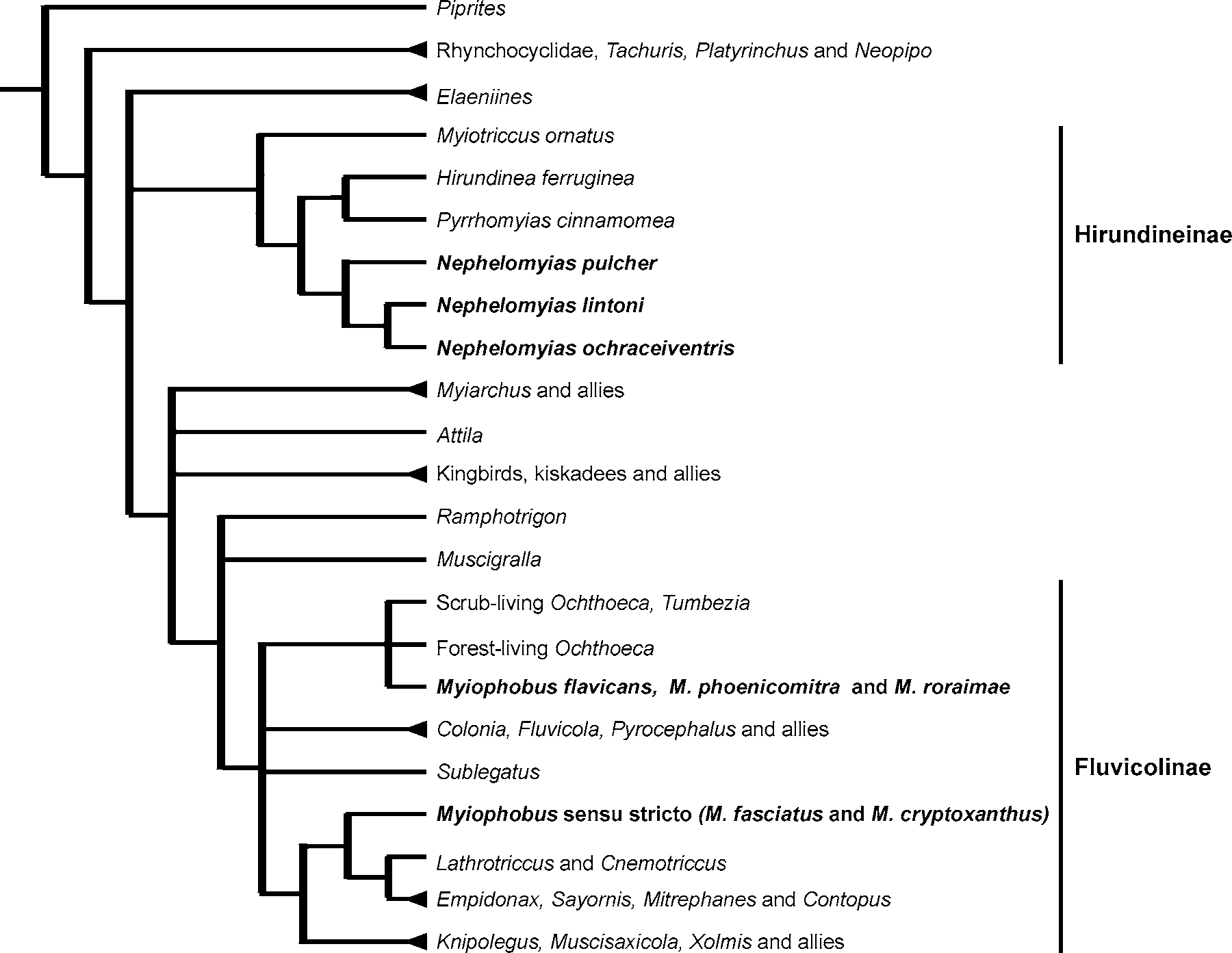 FIGURE 1. Simplified phylogenetic tree of Tyrannidae modified from Ohlson et al. (2008). Nodes supported by Bayesian posterior probabilities <0.95 are collapsed. Clades with several genera have in most cases been condensed and are indicated by arrows at the tip of the branch. All species traditionally placed in Myiophobus are in bold type. The three species in Nephelomyias form a strongly supported clade with Myiotriccus, Pyrrhomyias and Hirundinea (Hirundineinae), whereas the other Myiophobus species belong in Fluvicolinae.