Mortoniella leei is perhaps most similar overall to M. atenuata Flint , differing most distinctly in the shape of its paramere appendages. In its original description, it was differentiated from M. atenuata by having a short curved, unbranched, paramere appendage. However, in material examined (which did not include the holotype) the appendage seems to be consistently branched, with the ventral branch very narrow and hyaline or very lightly sclerotized (and thus easily overlooked). The shape and length of this ventral branch varies, and it is possible that it is absent in some specimens. The short, thick, curved, dorsal branch is distinctive for this species. The inferior appendages are more elongate than in M. brevis , n. sp., but the apices of the appendages are only lightly sclerotized, and thus may not be readily noticed. This is in contrast to the distinctly sclerotized apices of the inferior appendages in M. atenuata and M. dinotes , n. sp. The characteristic difference in the structure of the paramere appendage is diagnostic, and generally evident even in uncleared specimens.

Only three closely related species are included in this subgroup. The species have retained fork III in the hind wing and have inferior appendages with an elongate and more or less recurved dorsal process, both probably plesiomorphic characters. They also lack basodorsal processes on the phallicata. Paired ventrolateral spines are present on the endophallic membrane, but a ventromesal spine is absent. It seems likely that these are alternate character states representing the same character development. The species have a general similarity to members of the punensis subgroup in having a dorsal phallic spine that is somewhat expanded and compressed (dorsoventrally flattened) apically and in the form of tergum X, which has the apical lobes separated by a nearly horizontal mesal invagination. The shape of the ventral process of segment VI, which is short, but posteriorly directed, is also similar. Among species in the leroda group, only M. guyanensis , n. sp., in the limona subgroup, has similarly shaped inferior appendages; reasons for assigning M. guyanensis to the limona subgroup are given in the discussion of that subgroup. It is easily distinguished from species in the bolivica subgroup by the presence of small apical spines on the dorsal phallic spine. 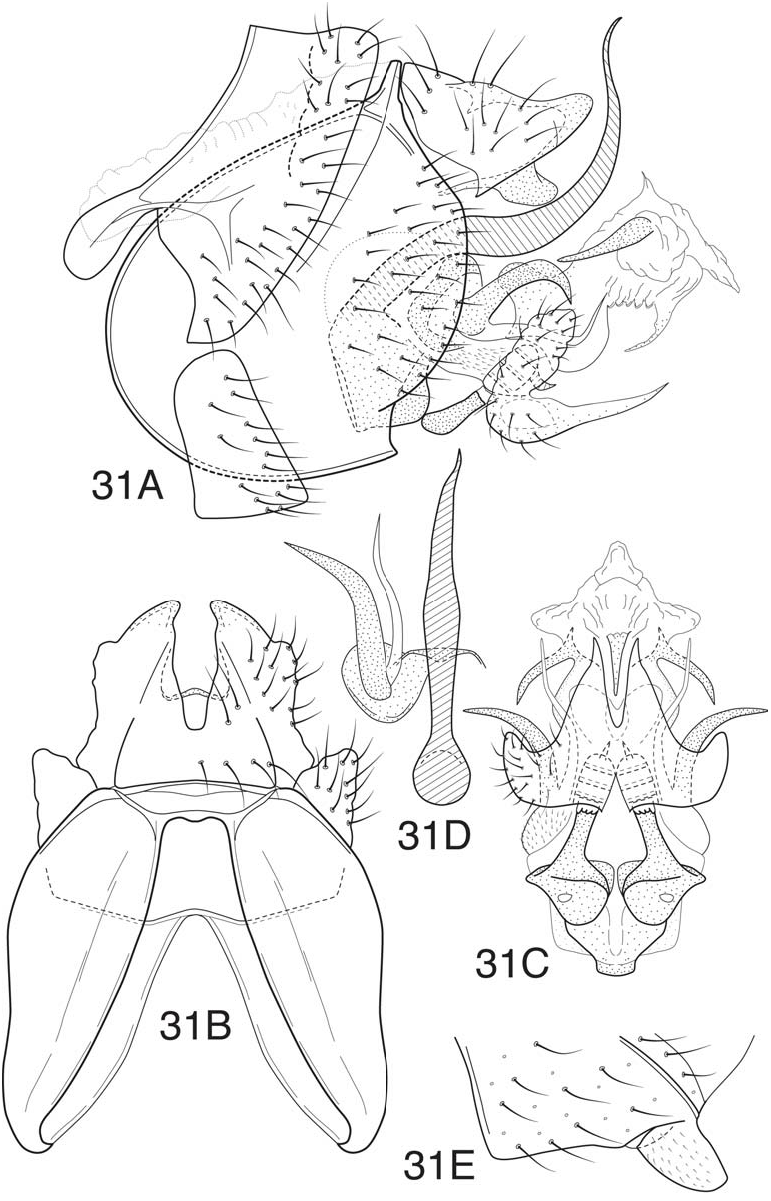