Variability. The studied exemplars differ from each other mainly by the length and shape of coxopleural process (see below) and the size and number (insignificantly in not regenerated legs) of spines on ultimate leg prefemora (see below).

Certain variability is observed in a degree of development of both sternal sutures and sulci ( Figs 25, 26) which are practically absent in largest spm 5 (length about 127 mm) and are well developed in the smallest spm 7 (the only one from Papua New Guinea), covering up to ¾ of sternal length in posterior sternites.

Only the largest spm 5 has leg 20 with tarsal spur and very long pretarsus of ultimate legs (as long as tarsus 2); this kind of variability has been already described by Schileyko & Stagl (2004: 117).

The studied material shows certain variation in the size of spiracles which are of typical structure for Ethmostigmus  ; in spm 3 the spiracles of the first pair occupy nearly whole surface of the respective pleuron ( Fig. 29View FIGURES 27 – 32).

Remarks. The examined material fits well to the general description of Ethmostigmus rubripes (Brandt, 1840)  as per Schileyko & Stagl (2004). The differences we were able to find are as follows: the forth basal antennal article is not completely setose ventrally ( Fig. 30View FIGURES 27 – 32); the lateral margination of tergites 6–9/12(13) is definite but incomplete; the remaining tergites have complete lateral margination; sternites (5)6–19 have incomplete paramedian sulci and short anterior paramedian sutures inside these sulci (these being poorly- to well-developedcompare Figs 25 with 26); sternite 21 with incomplete depression (from poorly- to well-developed) in posterior half; leg 1 with (or without) a rudiment of prefemoral spur, one poorly developed femoral and one tibial spur, legs 1–2 with two tarsal spurs, legs 3–19(20) with 1 tarsal spur.

Schileyko & Stagl (2004) recorded the interesting peculiarity of all subspecies of E. rubripes  —an ordered arrangement of the setae on some distal antennal articles, we read (p. 117): “Small seta[e], which cover more distal antennomeres, are arranged in longitudinal parallel rows”. In both studied and additional material these parallel rows of setae are well developed on antennal articles from 6–8 ( Fig. 35).

E. rubripes (Brandt, 1840)  is an obviously polymorphic species; Schileyko & Stagl (2004) consider as valid three subspecies: E. r. rubripes (Brandt, 1840)  , E. r. platycephalus  (Newport, 1845) and E. r. spinosus  (Newport, 1845). We still do not have molecular data on which to evaluate the real taxonomic status of these forms, so we discuss them as subspecies. The nominal form and E. r. platycephalus  have partly overlapping distributions—both have been recorded from Laos, China, Solomon Islands and New Guinea. As for the region considered in this article, they both were recorded from environs of Mamberamo river (Papua Province of Indonesia). Sometimes in such shared localities these subspecies may not be readily distinguishable because of wide variation in their main diagnostic characters (length + structure + spinulation of coxopleural process and spinulation of the ultimate prefemur). However, the studied material clearly differs from the nominal form having relatively long and “lyriform” coxopleural process ( Fig. 31View FIGURES 27 – 32) which is rounded dorsally vs coxopleural process much shorter (approximately as long as ultimate sternite), not “lyriform” and strongly arcuate dorsally (see Fig. 34 in Schileyko & Stagl (2004)). Also the studied specimens have considerably larger the prefemoral spines and corner spine of ultimate legs (compare Figs 36, 37 with 38).

The difference between the New Guinean material and E. r. spinosus  is not as clear as in the previous case, because some specimens (for example spm 4, 6) have quite enlarged corner spine and spines of ultimate prefemora ( Figs. 36, 37) being similar to E. r. spinosus  ( Fig. 39View FIGURE 39). Nevertheless as E. r. spinosus  occurs only in Sri Lanka, Myanmar (?) and S Vietnam we consider the studied material as E. r. platycephalus  because of both morphological characters and distribution.

As a result of the study of 7 specimens of E. rubripes platycephalus  (6 from E Indonesia and 1 from Papua New Guinea) we note that the difference between E. r. platycephalus  and E. r. spinosus  is less clear-cut than it was thought before. For example subadult spm 4 has ultimate prefemur with three ventro-lateral spines, which is the typical condition for r. platycephalus  (two spines in r. sp i n osu s), but both prefemoral spines and corner spine of not-regenerated ultimate leg ( Fig. 37) are practically as large as in r. spinosus  . In this respect the E Indonesian specimens present an intermediate form between typical r. platycephalus  from Papua New Guinea and typical r. spinosus  from Indo-Malaya ( Sri Lanka, Vietnam etc).

Ethmostigmus spinosus nannus  was described by Chamberlin (1939) for two juvenile ("about 35 mm. in length") specimens from "Doormanpad, elevation 1410 m " - a locality in Indonesian Province Papua at upper Lorentz river in the Snow Mountains, 03°30’S, 138°30’E. According to the original description (p. 5) this form has only one diagnostic character: the lack of the dorsal spine(s) of coxopleural process. However, it is known that this a character varies in E. rubripes  . For instance, Schileyko & Stagl (2004) noted that some subadults of rubripes spinosus  (for example No. 1564 in NHMW) (note that both syntypes of E. spinosus nannus  are also subadults!) have coxopleural process without dorsal spines. However, formally speaking, Schileyko & Stagl left open the question about the validity of the latter form. As noted above, the differences between rubripes spinosus  and r. platycephalus  seems to be very shallow, so at the moment “ spinosus nannus  ” is rather a synonym of r. platycephalus  because the latter has been collected in the type locality of “ spinosus nannus  ” and r. spinosus  does not occur in New Guinea at all. So we have not included this very doubtful form in the List of Species, but as we have not seen syntypes, this form is provisionally left as independent taxon. E. spinosus nannus  is recorded by Bonato et al. (2016) as Otostigmus spinosus nannus Chamberlin, 1939  with the following note: “Possibly a junior synonym of Ethmostigmus rubripes spinosus  (Newport, 1845)”. 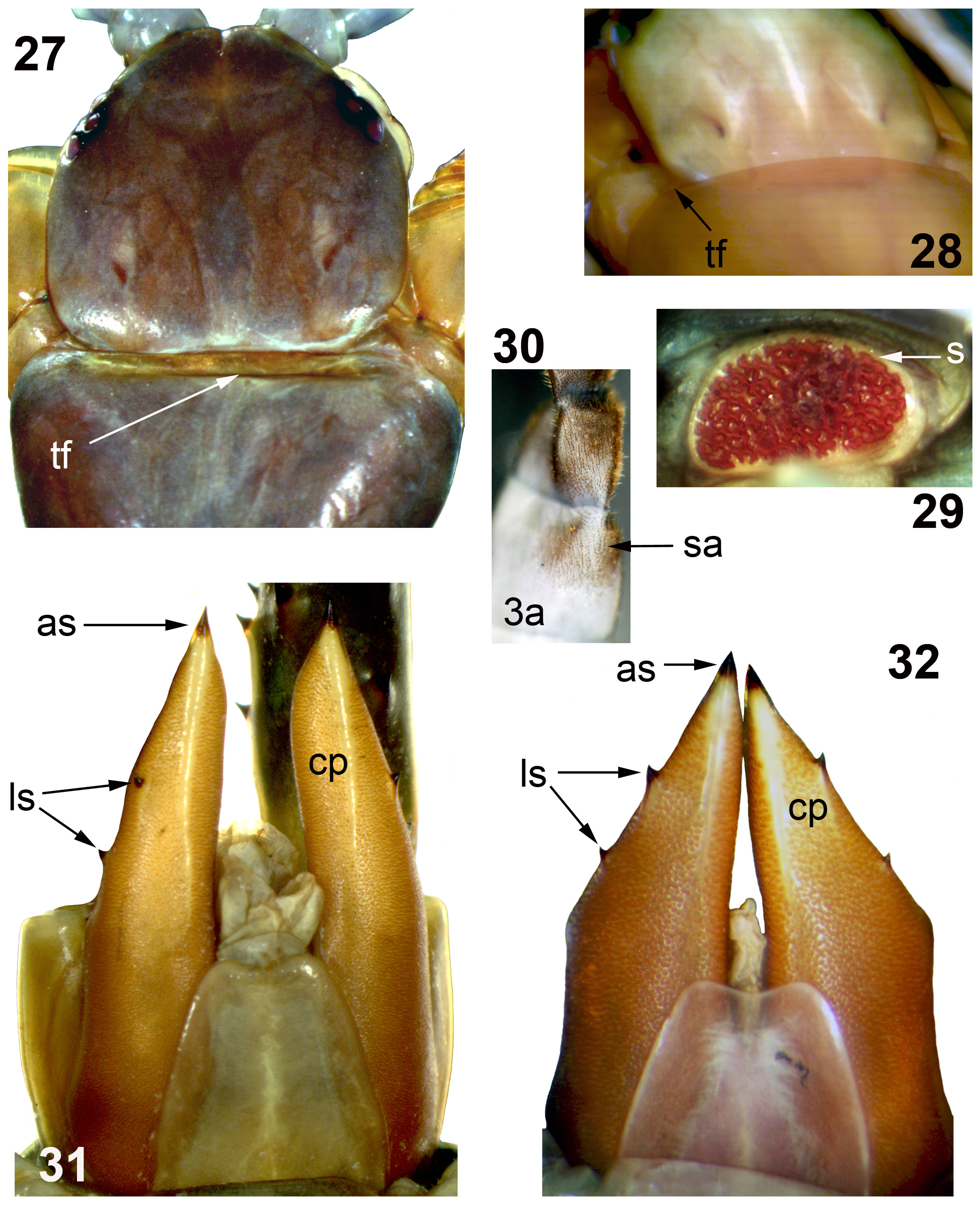