This species is named (as a noun in the genitive case) to honour Ellen Browning Scripps (1836–1932), a founding benefactor of the Scripps Institution of Oceanography ( McClain 2017) in La Jolla, California.

No species have been named for her to date, yet Ellen Browning Scripps’ impact on science has been very important (see McClain 2017).

Additional specimens mounted on slides were unfortunately lost after conducting the measurements.

Measurements given first in the text from holotype, ranges in in parenthesis include measurements taken from the lost specimens.

No eggs present in the investigated specimens.

Epidermal inclusions and spindle glands in the epidermis could not be described and measured due to insufficient preservation in the investigated specimens.

Subtidal in coarse to silty shell gravel at the surface layer at 9 m depth (subtidal).

Trilobodrilus ellenscrippsae   sp. nov. shows closest morphological resemblance to T. nipponicus   (but nests with T. windansea   sp. nov. in the molecular tree), but is much shorter, has a higher number of apical ciliary tufts on the prostomium, and its ciliary tufts along the body are not arranged in an as distinctive a pattern as in T. nipponicus   ( Fig. 3 View Fig.3 , Table 7 View Table 7 ). Trilobodrilus ellenscrippsae   sp. nov. resembles T. windansea   sp. nov. by having apical and intermediate ciliary tufts on the prostomium, and a dorsally incomplete second ciliary band with a mid-dorsal tuft ( Fig. 3B, D–E View Fig.3 , Table 7 View Table 7 ). However, T. ellenscrippsae   sp. nov. differs from T. windansea   sp. nov. in the shape of the prostomium, the additional ciliary row posterior to the second ciliary band, and by having a dorsally continuous third ciliary band as well as an incomplete fourth ciliary band ( Fig. 3 View Fig.3 , Tables 1, 7 View Table 7 ).

Trilobodrilus ellenscrippsae   sp. nov. further differs in its genetic sequences from all other species, see Molecular information above or Tables 4–6. 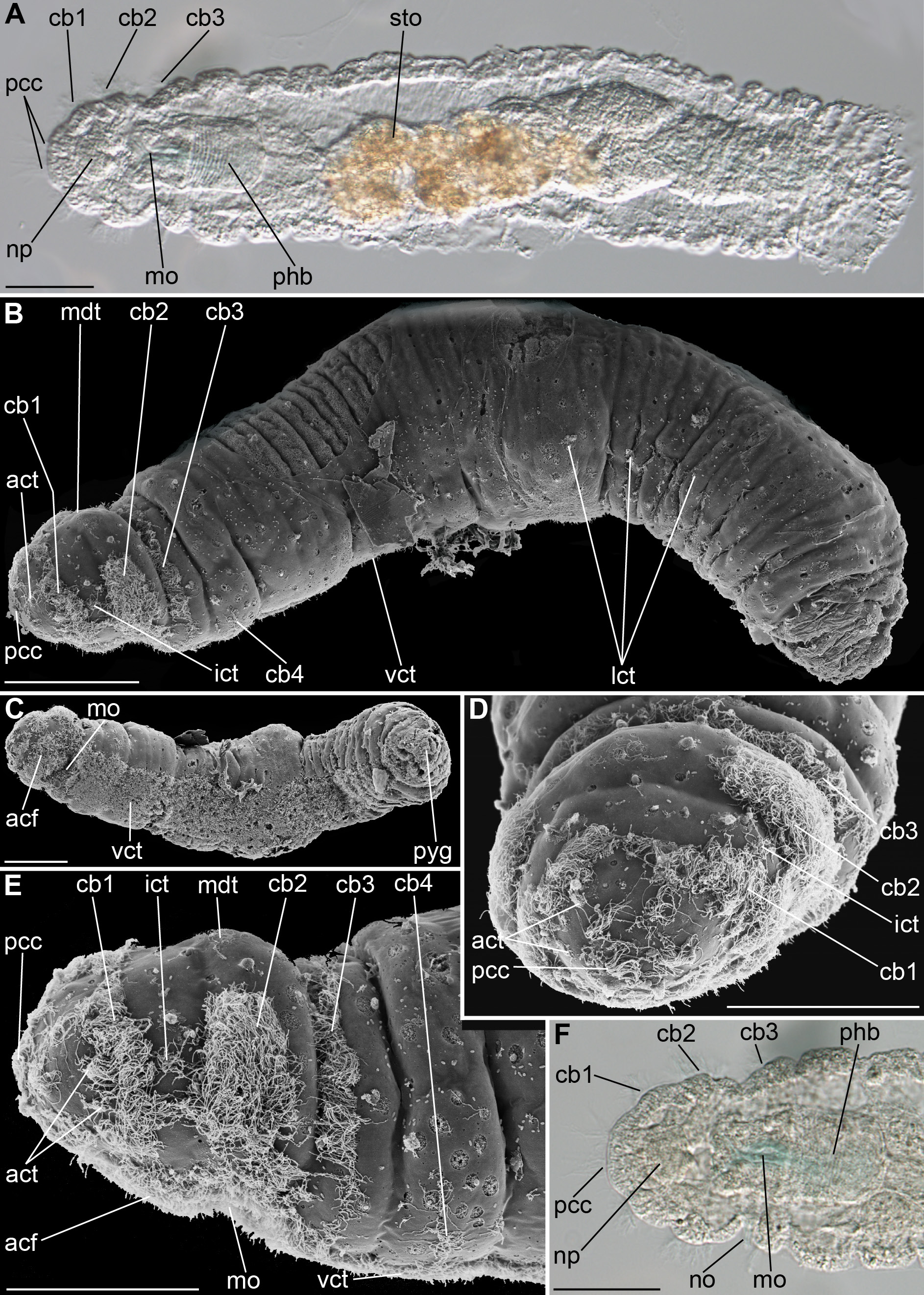