Tooth crown with tall median cusp flanked by numerous mesial and distal cusplets that decrease in size towards the crown margins. More cusplets on mesial side of cusp than on distal side, particularly on lateral teeth, resulting in strong crown asymmetry especially when median cusp is distally inclined. Mesial edge of crown strongly convex, whereas distal edge more or less straight. Prominent labial apron present, which is often bifid but can be uniformly rounded. Lingual and labial crown faces smooth, but faint wrinkles may be present on labial apron. Labial edge of apron overhangs the root. Both crown faces convex, but more so lingually. Prominent medial protuberance on lingual face has rounded lingual margin. Root thin with sub-triangular basal outline, and lobes do not extend past the lateral margins of the crown. Root base flat with deep nutritive groove that opens labially. Marginolingual foramina present on lingual root face.

Thurmond & Jones (1981: fig. 11) figured a specimen from the Tallahatta Formation at site AMo-8 that they referred to Ginglymostoma  sp. cf. blankenhorni  . However, not only was this species later designated a junior synonym of Nebrius obliquus ( Leidy, 1877)  by Noubhani & Cappetta (1997), but a reexamination of the specimen ( ALMNH PV 2005.6.434) by the present authors revealed that it belongs to Nebrius thielensi  . Holman & Case (1988), Feldmann & Portell (2007), and Clayton et al. (2013), each reported the recovery of Nebrius  teeth from site ACov- 11 in Covington County, AL, the latter two referring their specimens to Nebrius thielensi Winkler, 1874  . In contrast, Cappetta & Case (2016) later reported 174 Nebrius  teeth from the same locality and referred all to N. obliquus  . In justifying the referral of their teeth to N. obliquus  as opposed to N. thielensi, Cappetta & Case (2016)  explained that the teeth of the latter generally have a thicker apron that is less prominent and at times bifid, as seen on the type specimen of Winkler (1874a). On the other hand, Cappetta & Case (2016) noted that on N. obliquus  , the apron is more prominent and much more oblique on some teeth, as seen in Leidy’s (1877) type specimen. Noubhani & Cappetta (1997) had previously stated that N. obliquus  was typical of Ypresian deposits, whereas N. thielensi  was of middle Eocene age.

Of the Nebrius  teeth in our sample (n= 170), we observed that the shape of the labial crown apron varies from rounded, to flat, to bifid. The length of the apron also varies from short and rather narrow on specimens with bifid to flat aprons, to wide and elongate on specimens with rounded aprons. Although this might suggest the presence of two species, this variance in apron morphology is also seen within the dentitions of the Recent Nebrius ferrugineus (Lesson, 1831)  , where the teeth in the more anterior positions have short bifid aprons, but the aprons become more rounded and prominent in the lateral positions. Due to the variation observed within this extant analogue, it is our conclusion that the differences in apron morphology in our sample is not an indication of separate species (in this case N. obliquus  and N. thielensi  ), but rather a reflection of heterodonty. Noubhani & Cappetta (1997) cited further differences between the teeth of N. obliquus  and N. thielensi  , stating that the labial crown profiles on the teeth of N. thielensi  are less concave than those on N. obliquus  . However, this characteristic can also be observed on the teeth in the Recent Nebrius ferrugineus  jaw, as the labial crown face is flatter on the teeth in the anterior positions (i.e., the teeth with bifid aprons) and more concave in the lateral positions (i.e., teeth with rounded aprons). Thus, with a lack of characteristics to sufficiently separate these two taxa, it is our opinion that N. obliquus  from the Claibornian of Alabama should be considered a junior synonym of N. thielensi  , and all our Claiborne Group Nebrius  teeth are therefore assigned to this latter species.

Some of the Claibornian specimens in our sample superficially resemble teeth of Ginglymostoma angolense  . However, based on a sample from the Thanetian Williamsburg Formation of South Carolina (in the collections of SC), teeth of G. angolense  have a large main cusp relative to tooth size, and the labial apron is rather narrow and short (see also Dartevelle & Casier 1943; Arambourg 1952; Noubhani & Cappetta 1997). In contrast, the Alabama specimens have a rather small main cusp and the labial apron is wide and elongated.

SC 2012.47.45 resembles teeth of Chiloscyllium Müller & Henle, 1837  in having a wide, low crown bearing a robust medial cusp that is flanked by a single pair of rather large lateral cusplets, and a broad, somewhat bifid labial apron. In contrast, the similar teeth of Hemiscyllium Müller & Henle, 1838  have reduced or absent lateral cusplets and the labial apron is less rounded and more concave in oral view (Herman 1977; Noubhani & Cappetta 1997; Adnet 2006). SC 2012.47.45 is also similar to teeth of Delpitoscyllium africanum ( Leriche, 1927)  in that it appears to have had a large main cusp, and the sides of the crown are rather vertical, but the root is largely missing and the main cusp and lateral cusplets are too ablated to be certain ( Leriche 1927). The specimen can be distinguished from Ginglymostoma  and Nebrius  (see above) in having only a single pair of lateral cusplets, and it lacks the very elongated labial apron of Nebrius  . Although this specimen clearly differs from the other orectolobiforms in our sample, additional, better preserved material is needed in order to more accurately identify the taxon represented by SC 2012.47.45.

The lone specimen in our sample was collected from the basal Lisbon Formation at site ACov-11. Middle Lutetian, Zone NP15. 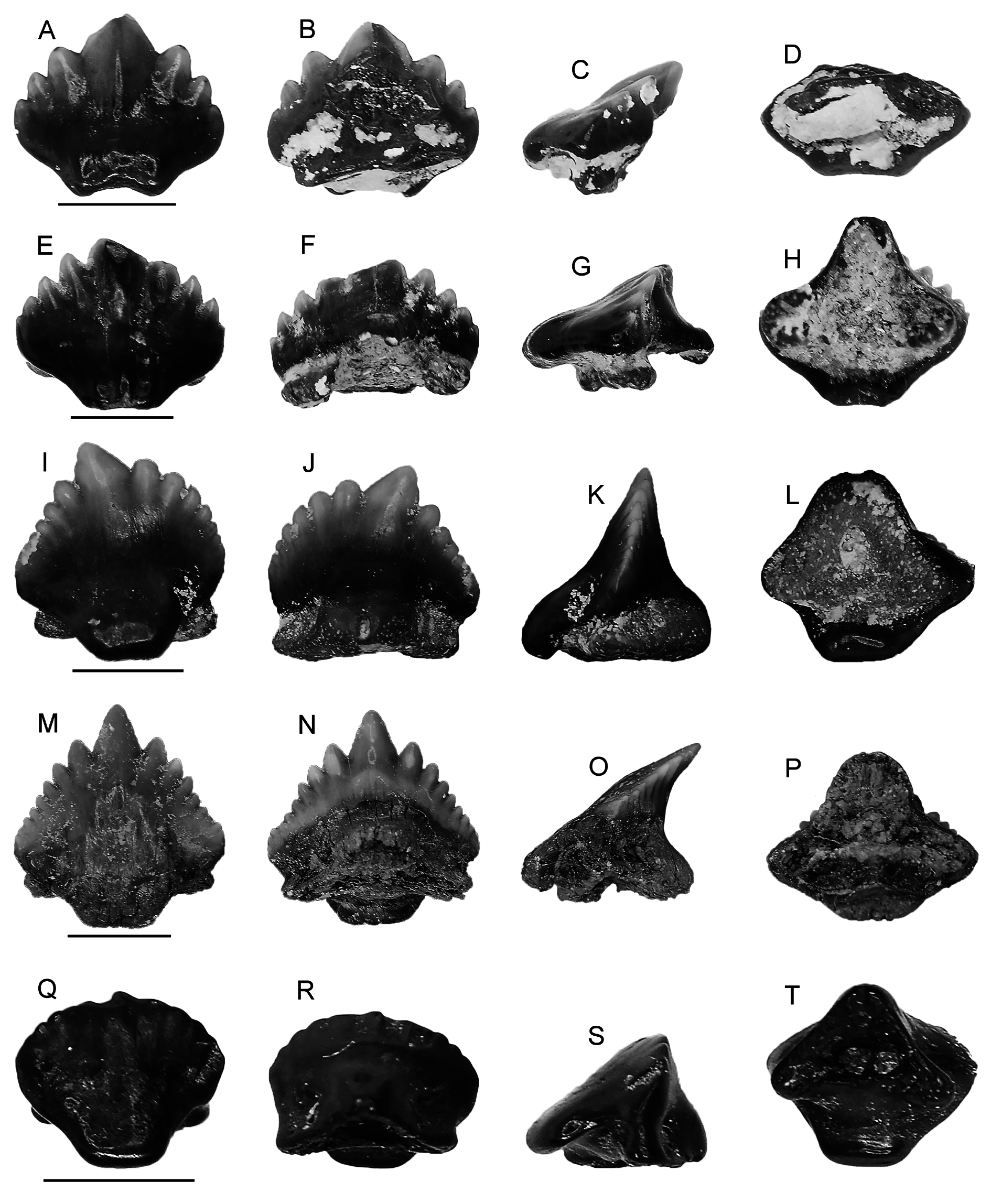