The genus name is composed of the Latin prefix ‘ pseud -’, meaning ‘false’ and the generic name Abdounia  , defining a new genus for certain species formerly placed within Abdounia  .

Two species formerly placed within Abdounia  , A. claibornensis ( White, 1956)  and A. recticona (Winkler, 1874)  are referred to this new genus. These two species appear related to the remaining members of Abdounia  based on their root morphology, as they have a flat basal face, shallow interlobe area, basal notch on some specimens, deep nutritive groove, and divergent and rounded root lobes. These two taxa can be separated from the various Claibornian species of Abdounia  by having three-to-eight mesial or distal cusplets (as opposed to no more than two pairs on Abdounia  spp.) and by having lateral teeth with a unique triangular outline in labial and lingual views. The mesial and distal cusplets also extend much higher onto the main cusp than they do on any of the members of Abdounia  . The two species placed into Pseudabdounia  gen. nov. are discussed in detail below.

White (1956) erected the subspecies Galeorhinus recticonus claibornensis  based on an isolated tooth collected from the Gosport Sand in Monroe County, AL. Cappetta (1980a) later created the genus Abdounia  for several species previously assigned to Scyliorhinus  , including S. beaugei  , S. biauriculatus  , S. minutissimus  , and S. enniskilleni  , as well as Galeorhinus recticonus claibornensis  . Based on his analysis of nine teeth from the upper Eocene Piney Point Formation in Virginia, Müller (1999) considered the claibornensis  morphology distinct enough to elevate it to species status.

Within our sample of Claiborne teeth, those assigned to Pseudabdounia claibornensis  gen. et comb. nov. appear very similar in overall gross morphology to teeth previously identified as Abdounia recticona  . The teeth were differentiated by the number of pairs of lateral cusplets, with those assigned to A. recticona  having three-to-four pairs and those of P. claibornensis  gen. et comb. nov. having fourto-eight pairs. Although both species can have teeth with four pairs of lateral cusplets, teeth belonging to P. claibornensis  gen. et comb. nov. can be differentiated by having smaller cusplets relative to the size of the main cusp. An argument could be made that the difference in number of cusplets could be a product of heterodonty, suggesting that teeth with narrower cusps with straight cutting edges are lower teeth, whereas teeth having a broader cusp with convex cutting edges are from the upper dentition. One might also suggest that anterior teeth may be those with fewer pairs of cusplets (three-to-four) that are arranged more in a horizontal row to the main cusp (giving them a T-shaped labial outline). Lateral teeth may be those with five or more cusplets that are oblique to the main cusp (triangular labial outline). However, the teeth in our Claiborne sample suggest that the difference in number of cusplets between P. claibornensis  gen. et comb. nov. and the recticona  morphology does not reflect heterodonty within a single species, as teeth from identical tooth positions (monognathic) and sizes (ontogenetic) have been recovered for both morphologies. Furthermore, the specimens in our Claiborne Group sample strongly suggests that the two species are stratigraphically separated, with P. claibornensis  gen. et comb. nov. being confined to the Gosport Sand and the recticona  morphology occurring within the stratigraphically older Tallahatta and Lisbon formations. The lack of stratigraphic overlap between these two species strongly suggests that the increase in pairs of cusplets is taxonomically significant and not related to intraspecific heterodonty. This, in turn, indicates that the two morphologies represent distinct taxa, further corroborating Müller’s (1999) elevation of the claibornensis  morphology to species status. 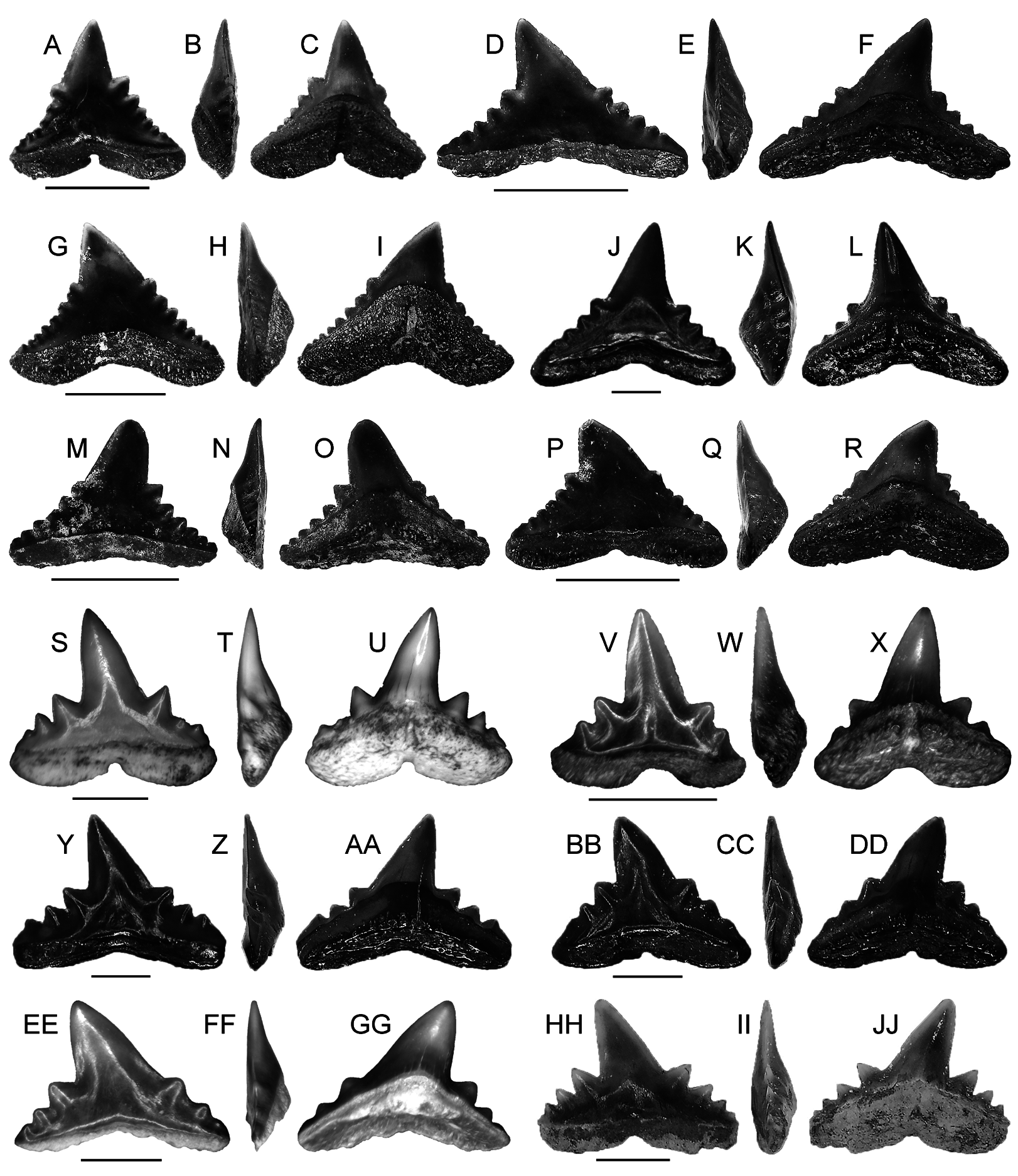