Three species of Abdounia  have been identified within our sample of Claiborne Group teeth, including A. beaugei ( Arambourg, 1935)  , A. enniskilleni ( White, 1956)  , and A. minutissima (Winkler, 1874)  . Two additional species previously assigned to Abdounia  are placed within a new genus and are described in detail below. The A. beaugei  anterior teeth in our sample have a single pair of lateral cusplets, easily separating them from the latter two species, which have three-to-eight pairs. Anterior teeth of A. minutissima  have taller triangular cusplets that are less united to the main cusp. Teeth of A. enniskilleni  are much larger in overall size and generally have fine longitudinal ridges on the lingual cusp face. The lateral teeth of A. beaugei  have two pairs of lateral cusplets, whereas A. enniskilleni  and A. minutissima  have a single pair.

When compared to the teeth in our sample, the Abdounia biauriculata  specimen figured by Cappetta & Case (2016: pl. 7, fig. 5) appears anomalous as it has two pairs of tall, pointed cusplets that are separated from the main cusp. Although this single tooth could be identified as A. biauriculata  , the absence of any other specimens in our sample leads us to believe that it may represent an aberrant A. minutissima  . A few teeth from our sample of Gosport Sand Abdounia  teeth have similar tall and pointed cusplets. However, in our opinion these teeth still fall within the morphological range of A. beaugei  . Furthermore, as eluded to by Casier (1966: fig. 65), A. beaugei  and A. biauriculata  may be conspecific, with any observed differences being the product of heterodonty and/or intraspecific or geographic variation. Support for this stems from the difficulty, at times, in distinguishing these two morphologies, and the fact that the morphologies appear to be coeval within the same deposits in Belgium (see Noubhani & Cappetta 1997). Based on samples from both Alabama (see below) and Georgia (also Parmley & Cicimurri 2003), the variation we observed in A. enniskilleni  leads us to believe that Cappetta & Case’s (2016) A. biauriculata  is synonymous with A. beaugei  .

Numerous teeth in our sample are assigned to Abdounia  sp. (see Appendix 1View Appendix 1) because of their incomplete preservation, making their specific assignments unclear. 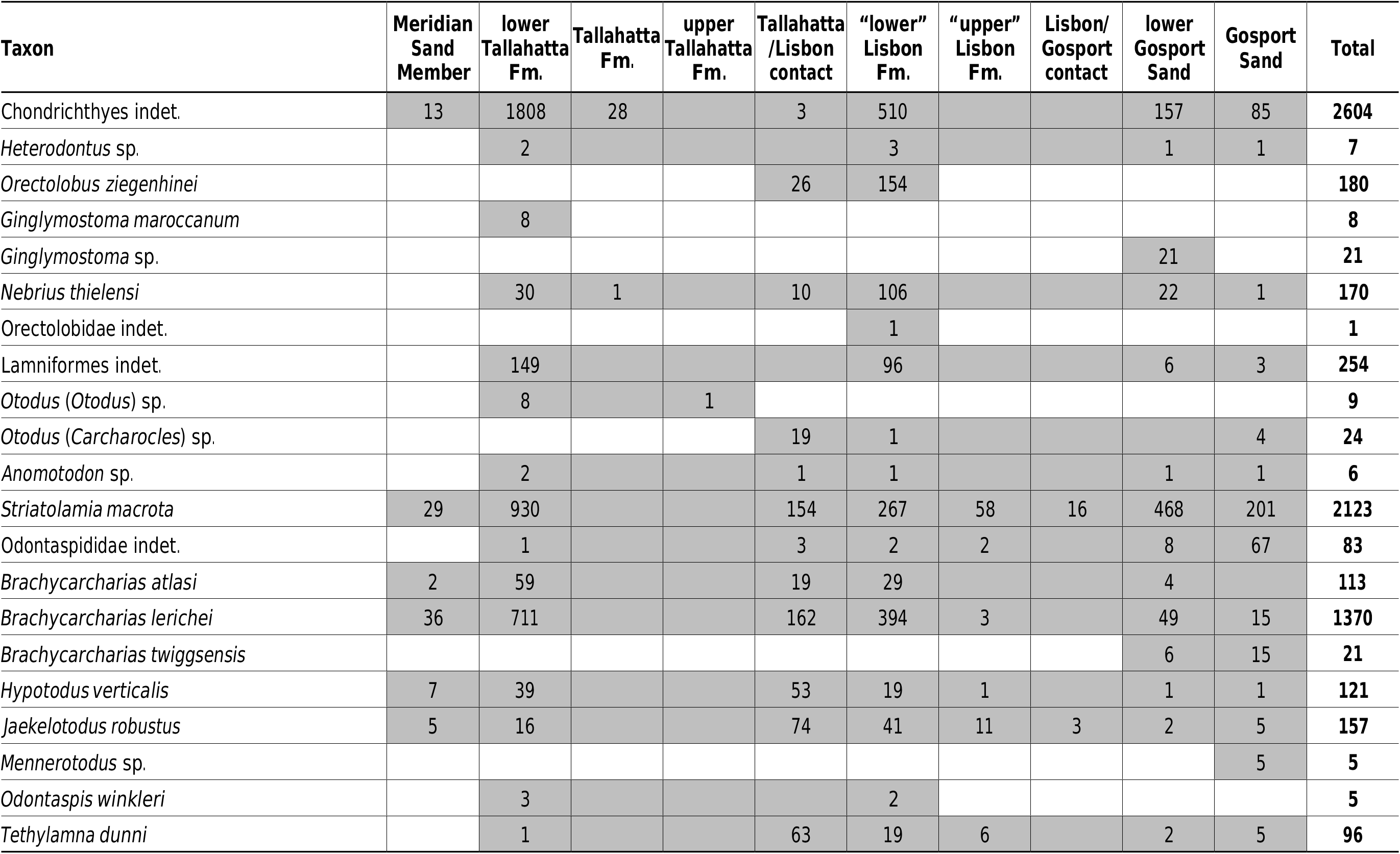