Leriche (1942) erected the species Galeocerdo alabamensis  based on a single specimen recovered from upper Eocene deposits at Cocoa in Choctaw County, AL. White (1956) later named G. clarkensis  in part based on specimens that Woodward (1889) reported from the Priabonian Yazoo Clay in Clarke County, Alabama. White (1956) justified his new taxon by stating that the teeth of G. clarkensis  were evenly serrated on the mesial edge, whereas those on the teeth G. alabamensis  and G. latidens  were more coarsely serrated. Thurmond & Jones (1981) recognized the validity and occurrence of both G. clarkensis  and G. alabamensis  in Alabama and noted that the two species could be differentiated by the shape of their mesial cutting edge, with that on G. clarkensis  being smoothly convex and that on G. alabamensis  being straight, concave, or S-shaped. Manning & Standhardt (1986) later synonymized G. clarkensis  with G. alabamensis  , stating, with no justification, that the former were the upper teeth of the latter. This synonymy is in error, as the alabamensis  morphology is more appropriately assigned to Physogaleus  (see above).

We could not confidently differentiate upper and lower teeth for this species. Monognathic heterodonty is expressed as anterior teeth that are nearly as tall as wide, and lateral teeth are much wider than tall with a more inclined cusp. Lateral teeth of G. clarkensis  could be confused with the lateral teeth of Carcharhinus mancinae  sp. nov., as both have convex mesial cutting edges and compound serrations. However, the distal notch on the teeth of C. mancinae  sp. nov. is much less defined and the lingual root protuberance is much more pronounced and “pinched.”

Tooth fragment consisting of the distal shoulder with three cusplets preserved. Cusplets cylindrical, distally directed, decrease in size laterally. Lingual face of cusplets lack ornamentation, and slight orolingual shelf visible. Labial face with very coarse, oblique ridges that extend from crown base but do not reach apices of cusplets. Labial edge of the crown base overhangs the root, which is incompletely preserved.

The single tooth fragment in our sample was picked by one of the present authors (DJC) out of bulk matrix recovered directly from the basal Lisbon Formation (bed 2 of Copeland 1966) at site ACov-11. This specimen was originally figured, but not described, by Clayton et al. (2013) who referred the tooth to cf. “ Synechodus  ” sp. Cappetta & Case (2016) contested this assignment, simply on the grounds that the specimen fell outside the youngest known occurrence of the family.

SC 2012.47.32 possesses a unique combination of having multiple lateral cusplets, a small orolingual shelf, a labial crown face that overhangs the root, heavily folded enameloid ornamentation on the labial face ( Fig. 37AView Fig), and a smooth lingual face ( Fig. 37BView Fig). Additionally, SC 2012.47.32 exhibits a third lateral cusplet, and the lateral two cusplets have a slight medial bend. This combination of characteristics separates this tooth fragment from all the other specimens in our sample and does conform well with the genera represented within the Paleospinacidae  , including Palidiplospinax Klug & Kriwet, 2008  and Synechodus Woodward, 1888  (see Cappetta 2012: figs 304–6). Unfortunately, we scrutinized the specimen but cannot determine what taxon it represents due to its incompleteness, but it is included here for thoroughness. 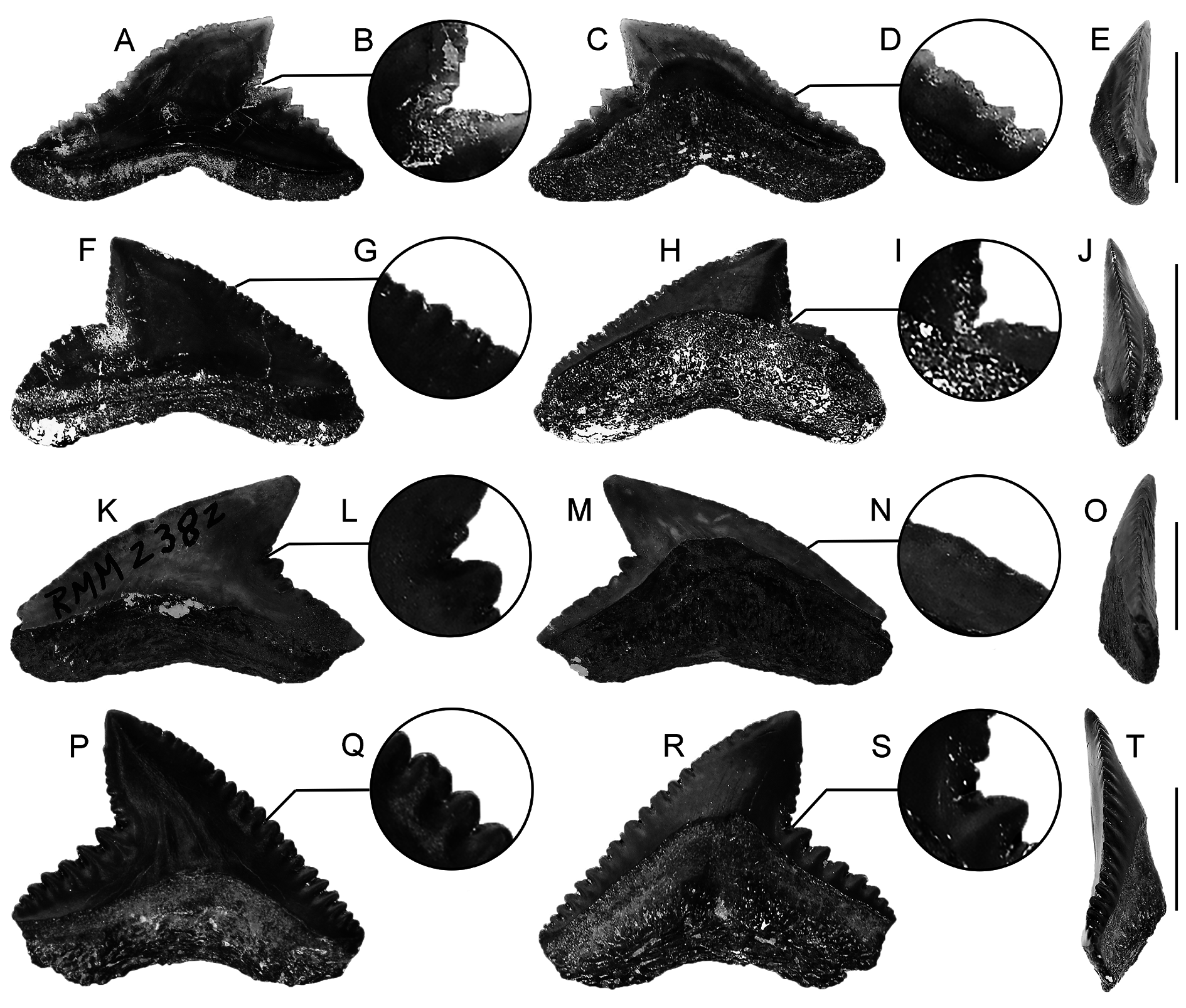