To test whether the degree of crown ornamentation is a taxonomically useful characteristic for differentiating these otherwise similar taxa, our sample of “ Dasyatis  ” teeth were directly compared to a modern set of dasyatid jaws (genus and species indet.) from the MSC collection. Our observations of this dentition are as follows:

1. Upper anterior teeth have a labial face that is obliquely flat to weakly convex.

2. Upper lateral teeth have a lower crown than anteriors but have a transverse crest that forms a sharper edge.

3. The labial face of the teeth is concave, and the apical one-third to one-half of the labial face is ornamented with vertical wrinkling.

4. The lower portion of the teeth have a reticulated ornamentation.

5. The ornamentation extends to lingual side of transverse crest.

6. Teeth in the lower jaw are similar to those in the upper jaw, but the lower jaw appears to have more lateral rows containing teeth with a concave labial face.

These observations indicate that many of the morphological characteristics cited for the isolated teeth of Dasyatis  are ambiguous and can be attributed to heterodonty (monognathic, dignathic, and gynandric). However, crown ornamentation appears to be consistent across all tooth files, upper and lower, within a dentition, suggesting the extent and type of ornamentation can be useful in differentiating the various taxa. This lends support to the presence of two species being present within our Claiborne sample.

Cappetta & Case (2016) recognized two Dasyatis  species from site ACov-11, including Dasyatis charlisae Case, 1981  and Dasyatis jaekeli ( Leriche, 1905)  . Of these, Cappetta & Case (2016) also referred Dasyatis  sp. 1 of Clayton et al. (2013) to D. charlisae  . Although several of our Lisbon Formation teeth are similar to D. charlisae  in that the ornamentation covers the entire labial face, the species is difficult to evaluate because Case (1981) based the species on only five teeth, all of which are slightly different in size, shape, and ornament. We tentatively follow Cappetta & Case (2016) regarding taxonomic assignment of this tooth type. These teeth of D. jaekeli  are differentiated from D. charlisae  by having a labial face bearing fine pitting that does not extend to the lingual side of the transverse crest. Placing the two Lisbon Formation morphologies within Dasyatis  is potentially problematic. Extant Dasyatidae  consists of eight genera and at least 88 species ( Nelson et al. 2016), and a recent phylogenetic analysis organized the species into the subfamilies Dasyatinae  , Neotrygoninae, Urogymninae, and Hypolophinae ( Last et al. 2016). The results presented by Last et al. (2016) showed the genera Dasyatis  and Himantura  to be paraphyletic, and the authors resorted to using external morphology to ascribe several species to these genera. Because these recent taxonomic revisions were based on genetics and body shape, as opposed to tooth morphology, it is currently unclear how identification of extinct members of the Dasyatidae  will be impacted. The difficulty in identifying fossil Dasyatidae  teeth was discussed by Ward (1979), who explained that the morphological characteristics used to define extant and fossil Dasyatis  teeth are shared among several different genera within the family. Due to the lack of taxonomic clarity among the fossil members of this family, we suggest the conservative usage of “ Dasyatis  ” for these teeth because they could belong to any number of different genera within the Dasyatidae  .

Clayton et al. (2013) identified this tooth type as Dasyatis  sp. 2 and differentiated it from their Dasyatis  sp. 1 specimens based on the highly convex labial face bearing fine pitting that does not extend to the lingual side of the transverse crest. The Dasyatis  sp. 1 specimens figured by Clayton et al. (2013: pl. 70, figs 5c–d) were later assigned to D. jaekeli  by Case & Cappetta (2016), and our comparison of the Lisbon sample to the type suite of D. jaekeli  ( Leriche 1905: pl. 4, figs 29–32) indicates they do indeed belong to this taxon.

Both high-crowned and low-crowned tooth morphologies have been identified within our sample, which we consider to be conspecific due to the shared fine pitting on the labial face. It is important to note that several authors (i.e., Case 1981; Cappetta 2012; Cappetta & Case 2016) have erroneously assumed that because the high-crowned dasyatid teeth can be attributed to males, the low-crowned morphology must belong to female individuals. However, depending on the species, both males and females can have lowcrowned teeth, and the males of some species may develop highly cuspidate teeth during the breeding season ( Kajiura & Tricas 1996). 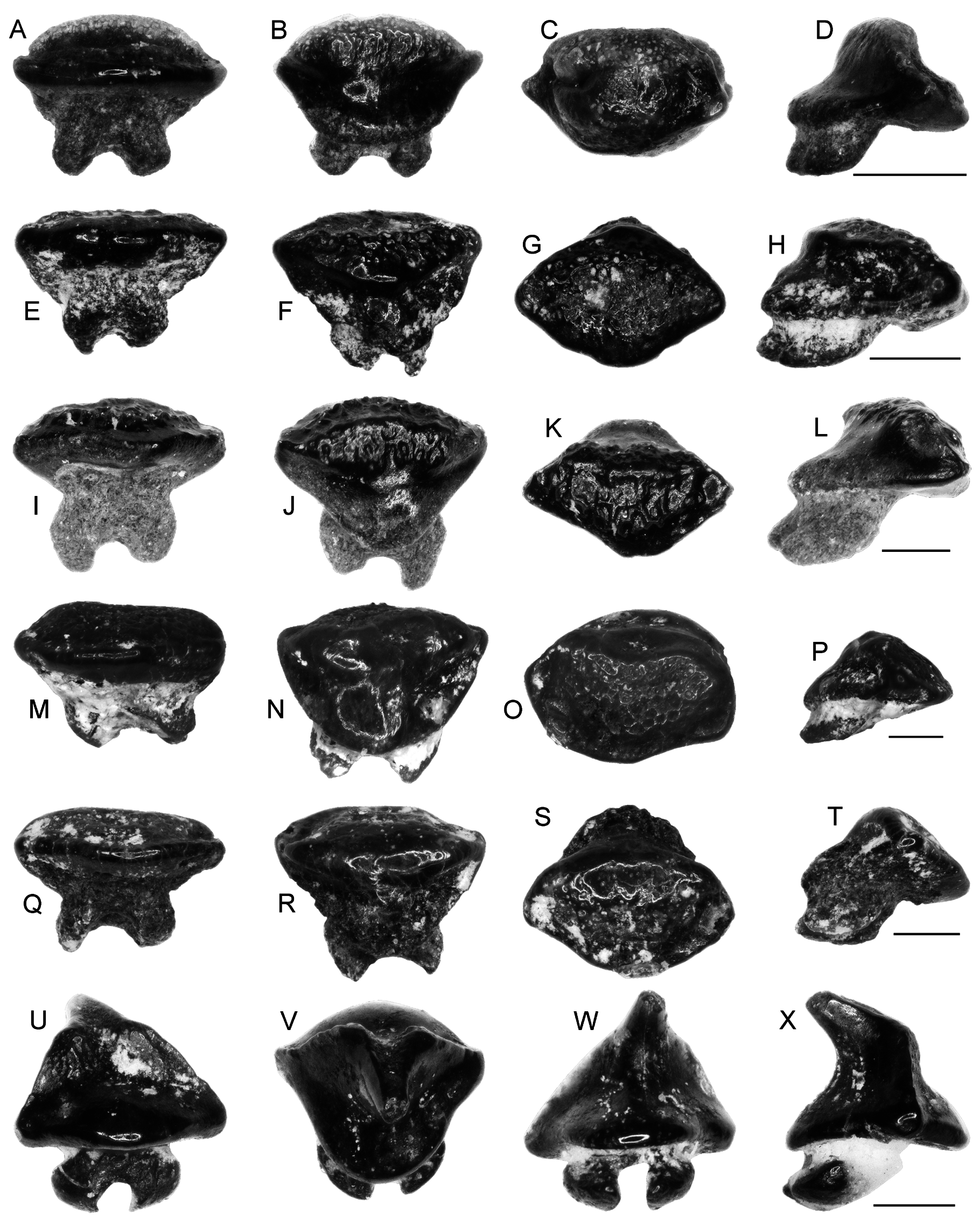