Description. Holotype incomplete, 2.3 mm long, 0.5 mm wide, 19 chaetigers. Body stout, cylindrical, dorsally highly convex, ventrally flattened; preserved specimens with no distinctive color pattern. Prostomium ovate, wider than long, with two pairs of eyes in trapezoidal arrangement, anterior pair slightly larger than posterior one ( Fig. 1View FIGURE 1 A). Antennae smooth, digitiform and slightly expanded distally, all similar in size, as long as or shorter than prostomium; median antenna inserted between anterior eyes; lateral antennae arising from the anterior edge of the prostomium ( Figs 1View FIGURE 1 A, 3A). Palps short and broad, conical, basally fused and with the tip ventrally folded ( Figs 1View FIGURE 1 A, 3A). Two nuchal organs as ciliated grooves located between prostomium and peristomium ( Fig. 3View FIGURE 3 A). Peristomium well developed, similar in length to subsequent segments, with a pair of tentacular cirri similar in shape to antennae, dorsal ones slightly longer than ventral ones; occipital flap present, well developed, partially covering the prostomium ( Figs 1View FIGURE 1 A, 3A). Dorsum with minute pores and bundles of cilia transversally arranged in two rows: one in the middle part of the segments and the other near its anterior edge ( Fig. 3View FIGURE 3 B). Dorsal cirri similar in shape to tentacular cirri, longer than parapodial lobes, alternating in length, although the difference is not very clear ( Fig. 1View FIGURE 1 A). Ventral cirri short, distally expanded, fused with parapodia, inserted in the middle part and not extending beyond parapodial lobe. Parapodial lobes long, distally bilobed and with a bundle of long cilia in one side ( Fig. 3View FIGURE 3 C). Between 6–7 compound heterogomph chaetae in anteriormost parapodia, up to 10 in following segments. Chaetae with short blades, bidentate, with both teeth strongly separated and obliquely located, distal tooth longer and larger than subdistal one; spines on edge of falcigers, long and coarse in dorsal and medium chaetae, short and slender in inferior chaetae ( Figs 2View FIGURE 2 A, C, 3D, E, F). Strong dorso-ventral and slight antero-posterior gradation in length of blades ( Fig. 2View FIGURE 2 A, C). Simple chaetae not observed. Two aciculae per parapodium, subdistally inflated and distally truncated, bordered by a dense crown of fine spines, one of them slightly shorter ( Fig. 2View FIGURE 2 B, D). Pharynx short, extending through 4 segments ( Fig. 1View FIGURE 1 A); trepan with 7 teeth posteriorly located, alternating in size: one small at each end, followed by two larger and one smaller in the middle, and two lateral plates bigger in size ( Fig. 1View FIGURE 1 B). Proventricle longer and thicker than pharynx, extending through about 6–7 segments, with about 45 muscle cell rows ( Fig. 1View FIGURE 1 A).

Remarks. Odontosyllis septemdentata  n. sp. is characterized by having bidentate falcigers and a trepan with 7 teeth alternating in size. Most species of the genus have teeth similar in size, except Odontosyllis setoensis Imajima, 1966a  and Odontosyllis heterodonta Góngora-Garza and de León-González, 1993  . However, in both species, larger teeth are located in the middle of the trepan and smaller ones on the sides, never alternating in size.

Additionally, both species have very different chaetae from those of the species herein described: O. setoensis  has shorter and broader falcigers, while O. heterodonta  has falcigers of two sizes, very similar in shape; in both species, spines are inconspicuous. Odontosyllis phosphorea Moore 1909  , and Odontosyllis polycera Schmarda 1861  , have chaetae similar to the species herein described. However, the former has a characteristic color pattern and a longer proventricle (extending through 9 segments, with about 60 muscle cell rows), while the latter has smooth and trilobed aciculae and also a longer proventricle (extending through 9–10 segments too, but with up to 130 muscle cell rows). Even if all the specimens analyzed are incomplete, and therefore the simple chaetae and the pygidium could not be examined, the other characteristics are sufficient to separate this species from all other so far described in the genus and validate its status of new species.

Etymology. The specific name is derived from the Latin terms septem and dentis referring to the seven-toothed trepan. 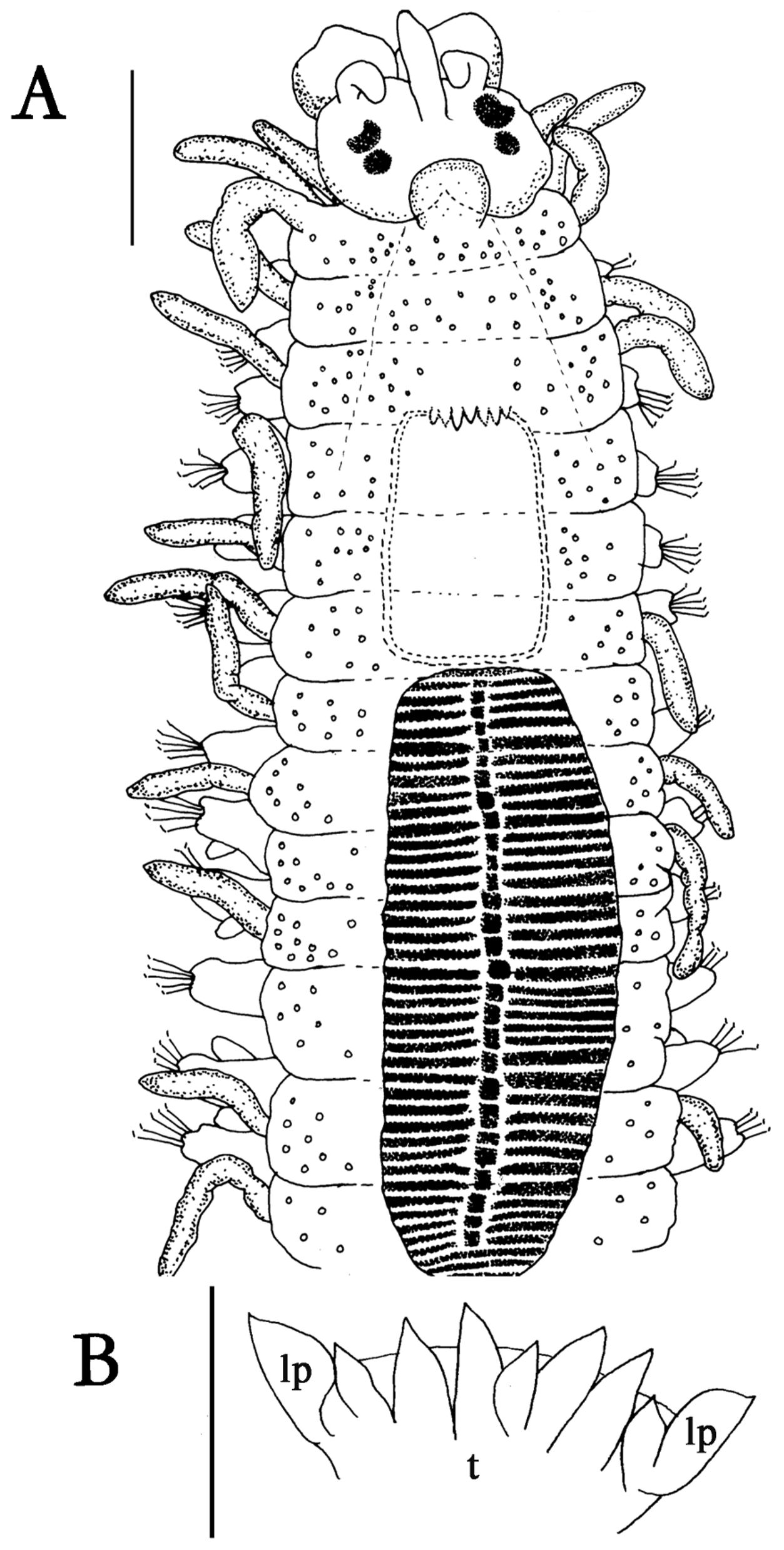 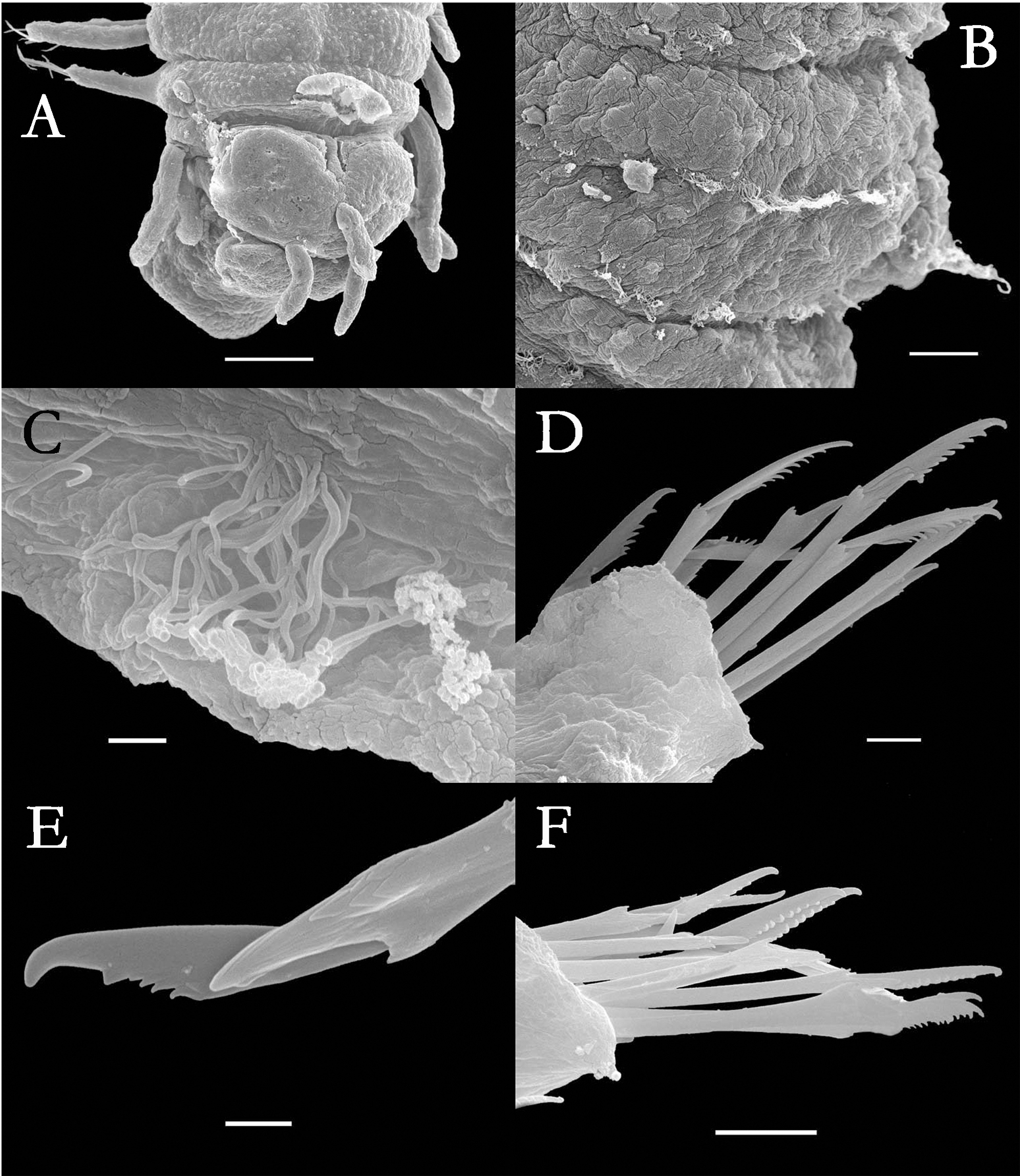