Etymology: Named after the Brazilian state Paraná, where the species was found.

One pair of preclitellar nephridia, at 6 / 7 ( Fig. 5View FIGURE 5 A), sausage-shaped, rounded proximally and distally, 4 x as long as wide, almost as long as worm body diameter and up to 1 / 4 as wide (e.g., 127 µm long and 34 µm wide, fix), tapering distad, no constriction at septum, the latter very thin, not always distinguished; anteseptale not longer than wide, nephrostome embedded obliquely in nephridial body, efferent duct not set off against postseptale, no terminal vesicle, ectal pore conspicuous. Postclitellar nephridia ( Fig. 5View FIGURE 5 F) similar in shape as preclitellar nephridia, but extended, not bent, 5 x as long as wide, and longer than worm body diameter; altogether only 1-5 nephridia in postclitellar segments, first at 14 / 15–18 / 19.

All reproductive organs in the usual position: Testis and sperm funnels in XI, ovary and male pores in XII.

Clitellum ( Fig. 5View FIGURE 5 I) in ca. 24 separate rows (viv), or rows dense but distinct (fix). Cells absent mid-dorsally and mid-ventrally. Latero-dorsally mostly hyalocytes with a few interspersed granulocytes, hyalocytes not in longitudinal rows, or in disordered longitudinal rows dorsally or laterally, 2–5 hyalocytes per transverse row on each side. Latero-ventrally only granulocytes. Gland cells not projecting proximally into coelom.

Remarks. This new species stands our by five peculiarities, (1) dark coelomocytes, (2) (sub-)medial insertion of anterior ventral pharyngeal gland lobe in IV, (3) intestinal fold at the transition oesophagus/intestine, (4) strongly muscular pygidium, (5) absence of glands around male pore. A. paranensis  is the only species in the genus that possesses oesophageal appendages together with intestinal folds. Most Achaeta  species have oesophageal appendages, but intestinal diverticula-like folds are described only for A. iridescens Christoffersen, 1979  , a species without oesophageal appendages. Intestinal folds are also present in our series of A. neotropica  (comp. Fig. 4 G). In addition, one specimen of our A. neotropica  series has a muscular pygidium typical of A. paranensis  . The distinction between A. paranensis  and A. neotropica  is nonetheless clearcut, difference are listed in Table 4. A iridescens  is much larger than A. paranensis  , for further differences see again Table 4.

Coloured coelomocytes are not uncommon in Achaeta  , see A. hanagarthi  , but the intensely dark-grey tint in the cells of A. paranensis  is so far unique in the genus. Numerous species in other genera share this trait, e.g. Marionina argentea Michaelsen, 1889  (b), Fridericia nix Rota, 1995  , Enchytraeus bulbosus Nielsen & Christensen, 1963  , Mesenchytraeus lusitanicus Collado et al., 1993  , to name a few. The colour appears to be caused entirely by the refractile properties of the numerous vesicles, it disappears in fixed material. The darkgrey colour increases from the cell periphery towards the nucleus in the center, which itself is uncoloured ( Fig. 5View FIGURE 5 C). Coelomocyte refractions often obscure other structures in living specimens. 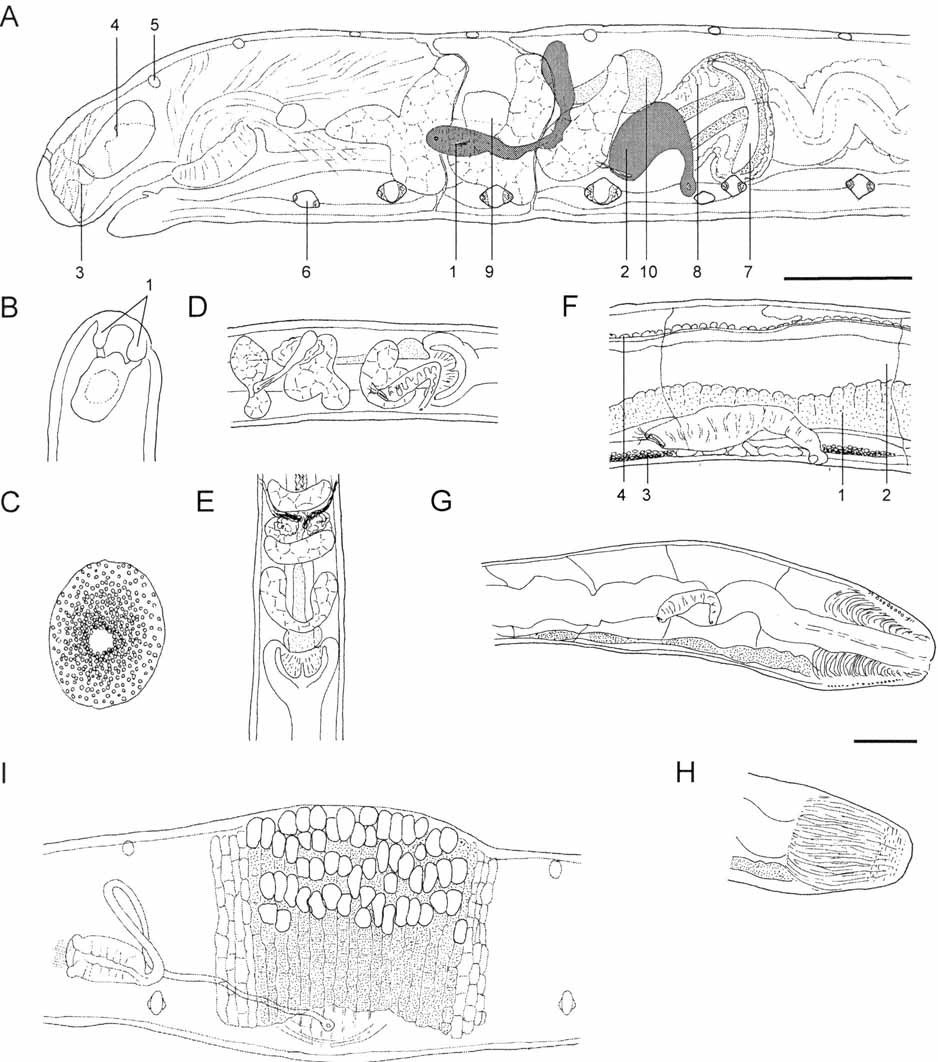