Hooks in notopodia from chaetigers 32–44, up to five in a series among capillaries. Hooks in neuropodia from chaetigers 14–16, up to ten in a series, accompanied by inferior sabre chaetae and alternating capillaries throughout ( Fig. 20View FIGURE 20 D). Alternating capillaries thin, about two times as long as hooks, with narrow limbation in anterior neuropodia, gradually becoming alimbate on posterior chaetigers. Hooks with outer and small inner hoods, multidentate, with 4–6 pairs of small upper teeth arranged in two vertical rows above main fang; shaft slightly bent ( Fig. 21View FIGURE 21 C, D). Younger hooks situated in lower parts of hook series in anterior neuropodia of small individuals with 2–3 pairs of small upper teeth above main fang.

Pygidium with one long middorsal cirrus and a pair of short ventral cirri, all bearing short non-motile sensory cilia ( Fig. 21View FIGURE 21 B).

Main dorsal blood vessel transformed into gut sinus in anterior part of midgut. Soft heart body up to 20 µm in diameter extending inside main dorsal vessel from level of chaetigers 3–4 to chaetigers 9–12 ( Fig. 20View FIGURE 20 G). Blood red, without globules or other elements.

Reproduction. Prionospio multicristata  is gonochoristic. Both in females and males from around Lizard Island the gametes develop from chaetiger 12 to chaetigers 50–62. Oogenesis is intraovarian. Vitellogenic oocytes develop in ovaries attached to segmental blood vessels. Intraovarian oocytes were up to 110 µm in diameter, with germinal vesicle about 60 µm and single nucleolus 20 µm in diameter. Oocyte envelope is 2–3 µm thick, with rugose external surface. One mature female off Darwin ( MIMB 28129) has all morphological features same as specimens from Lizard Island but oocytes from chaetiger 15 onwards; the oocyte envelope has single semispherical depression 25–30 µm in diameter and 15–20 µm deep ( Fig. 20View FIGURE 20 H –J). Spermatogonia proliferate in testes; spermatogenesis occurs in the coelomic cavity. Spermatids are joined in tetrads. Spermatozoa are ect-aquasperm with small acrosome, spherical nucleus 2–3 µm in diameter, spherical mitochondria probably four in number, and a long flagellum.

Remarks. Prionospio multicristata  belongs to the P. steenstrupi  group (see above Remarks for P. anneae  n. sp.). It was originally described from Careel Bay, New South Wales, Australia by Hutchings & Rainer (1979). The species was characterized by the prostomium broadly-rounded anteriorly, black eyes in fixed specimens, with median eyes large, comma-shaped, caruncle extending to end of chaetiger 3, chaetiger 1 with capillaries in both rami, chaetiger 2 with prominent acuminate neuropodial lamellae elongated ventrally, moderate dorsal crest on chaetiger 7 and lower crests from chaetiger 8 to chaetigers 25–30, sabre chaetae in neuropodia from chaetiger 10, and hooded hooks with 5–6 pairs of upper teeth in notopodia from chaetigers 40–50 and in neuropodia from chaetiger 17. Hutchings & Turvey (1984) reported the species from South Australia. They did not describe the color of eyes but mentioned that the only specimen had caruncle to end of chaetiger 4. This caruncle appears longer than originally described in specimens from Careel Bay and also observed in specimens from Queensland. The record from South Australia should be verified.

Prionospio  with black eyes from Lizard Island and Darwin appear identical to the original description of P. multicristata  and are herein referred to this species. These worms also appear very similar to P. ku l i n in the shape of branchiae and neuropodial postchaetal lamellae on anterior chaetigers (with elongated acuminate lower part in chaetiger 2, trapezoidal in chaetiger 3, and rounded, semicircular from chaetiger 4 onwards), moderate dorsal crest on chaetiger 7 and lower crests on a series of succeeding chaetigers, arrangement of sabre chaetae and hooks, hook dentition and gametes starting from chaetiger 12. The two species occur together in some localities. Fixed adults of these species can be distinguished by the color of eyes, black in P. multicristata  and red in P. kulin  , and length of the caruncle, to the end of chaetiger 3 in P. multicristata  and to the end of chaetiger 2 in P. k ul i n. Living small individuals of the two species have red eyes and short caruncles and appear similar to each other.

Habitat. In this study, adults of P. multicristata  were found in fine coral sand from intertidal to 16 m depth. 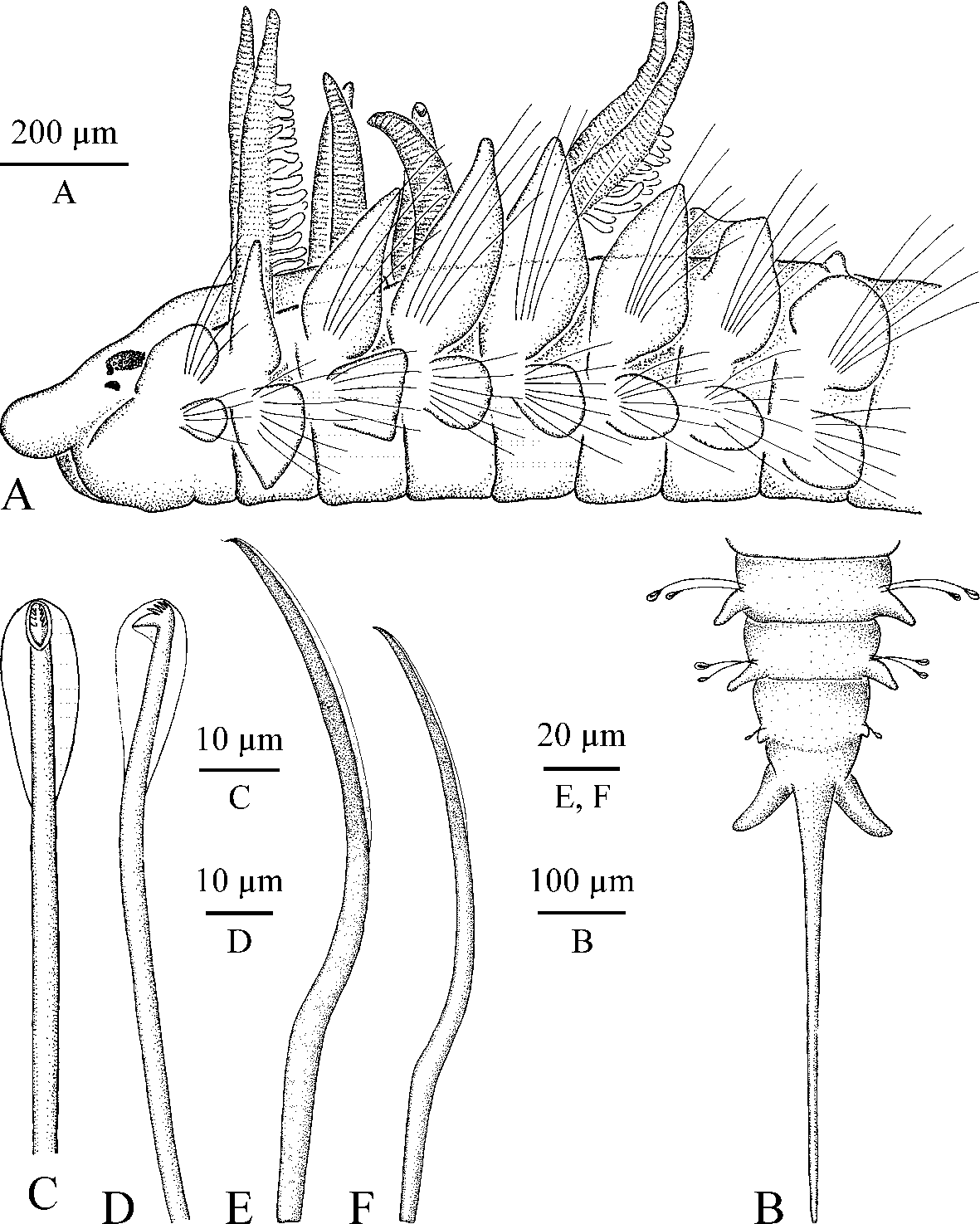