Hooks in notopodia from chaetigers 25 –28, 1– 3 in a tuft among capillaries. Hooks in neuropodia from chaetigers 13–15, up to seven in a series, accompanied by inferior sabre chaetae and 1–4 alternating capillaries throughout. Alternating capillaries up to 2.5 times as long as hooks, in anterior neuropodia with narrow limbation, in posterior neuropodia thin, alimbate ( Fig. 25View FIGURE 25 E). Hooks multidentate, with 3–4 pairs of very thin upper teeth arranged in two vertical rows above main fang, with inner and outer hoods; shaft slightly bent ( Fig. 25View FIGURE 25 F).

Up to eight pairs of branchiae on chaetigers 2–9, fewer in small individuals, all apinnate, robust, flattened, with surfaces oriented perpendicular to body axis, longitudinal bands of cilia running along inner and outer edges ( Fig. 25View FIGURE 25 A). Branchiae full-sized on chaetiger 3, up to two times as long as notopodial lamellae, and then gradually becoming shorter on succeeding chaetigers. Afferent and efferent blood vessels interconnected by numerous radial capillaries giving branchiae annulate appearance.

Main dorsal blood vessel transformed into gut sinus in anterior part of midgut. Soft heart body up to 20 µm in diameter extending inside main dorsal vessel from level of chaetigers 3–4 to chaetigers 10–11. Blood red, without globules or other elements.

Reproduction. The only two individuals collected, in August 2013, were immature.

Remarks. Prionospio  with only apinnate branchiae 1 from around Australia were referred to P. cirrifera Wirén, 1883  by Blake & Kudenov (1978), Hutchings & Rainer (1979), Hutchings & Murray (1984), and Hartmann- Schröder (1985, 1989, 1990, 1991). Wilson (1990) reassessed all southern Australian records of this species and referred them to three new species, P. tatura  , P. wambiri  and P. yuriel  . He also concluded that additional species might be expected to occur in northern Australia, and P. cirrifera  is unlikely to occur in Australian waters.

Prionospio tatura  was originally described from estuarine localities in Port Phillip Bay, Victoria, and also recorded from Paynesville, Victoria, and Nornalup, Western Australia, by Wilson (1990). Adults were characterized by the prostomium broadly-rounded anteriorly, two pairs of small red eyes, caruncle extending to end of chaetiger 1, chaetiger 1 with capillaries in both rami, chaetiger 2 with rounded neuropodial lamellae not elongated ventrally, up to 11 pairs of apinnate branchiae from chaetiger 2, branchiae on chaetiger 2 two-three times as long as notopodial lamellae, sabre chaetae in neuropodia from chaetigers 9–12, and hooded hooks with four pairs of upper teeth beginning in notopodia from chaetigers 23–38 and in neuropodia from chaetigers 13–17. Adult P. tatura  appear very similar to those of P. wambiri  and P. y ur i el and differ from them in the shape of prostomium, length of branchiae and arrangement of sabre chaetae and hooks in neuropodia ( Wilson 1990: Table 2).

Adult Prionospio  from Lizard Island with only apinnate branchiae fit the original description of P. tatura  . They slightly differ, however, in that worms from Lizard Island have shorter branchiae, up to two times as long as notopodial lamellae, while those from Victoria have branchiae up to three times as long as notopodial lamellae. Moreover, coral reef conditions around Lizard Island differ significantly from estuarine conditions in the type locality of P. tatura  . At this point, however, no character was found to distinguish the Lizard material as a separate species. It is therefore herein referred to as P. cf. tatura  . 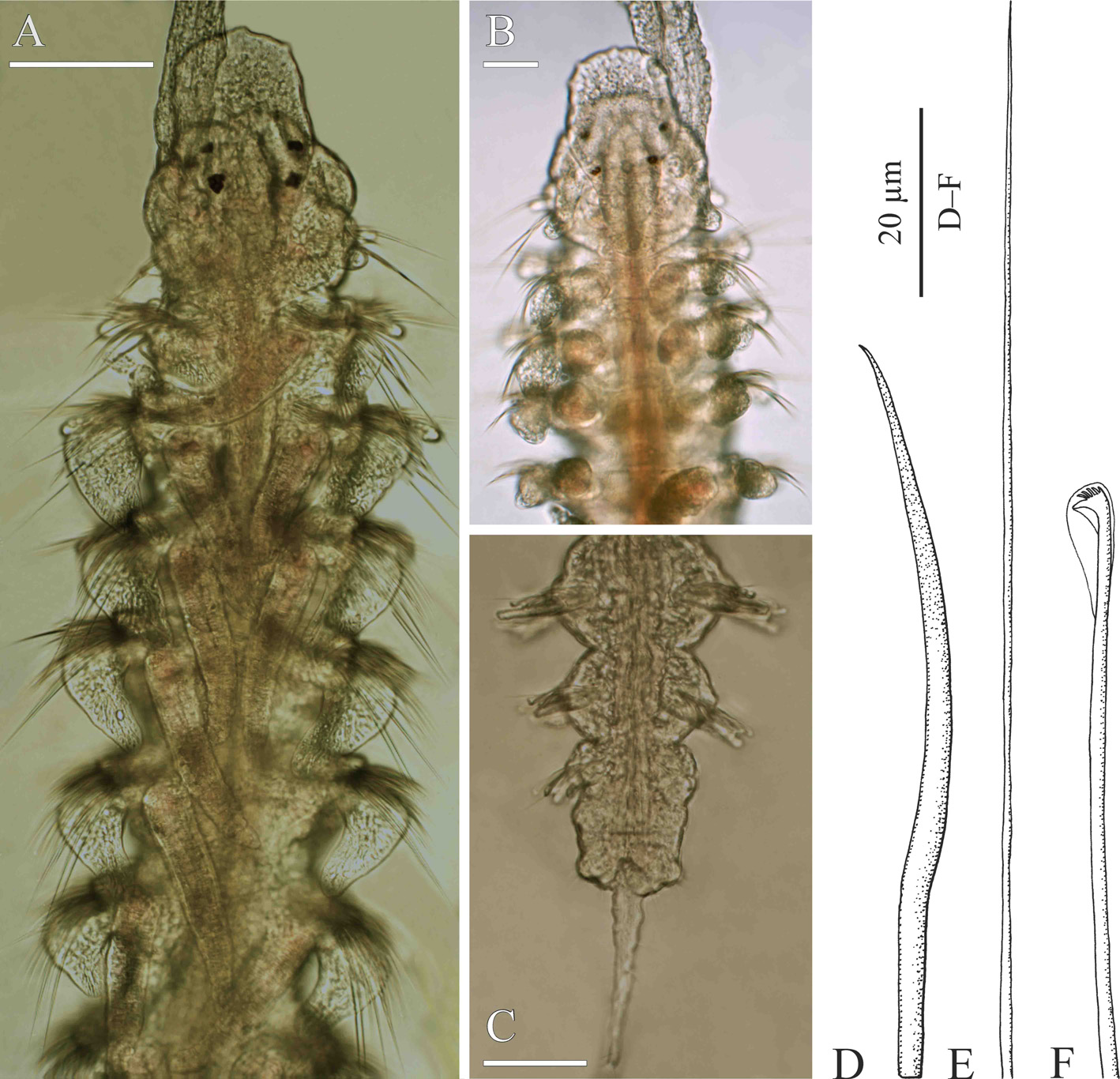