Etymology. The adjective coronata means “crowned” in Latin and refers to the shape of the posterior pronotal lobe of the prothorax of the female.

Genital ligula (as in Fig. 11 View FIGURE 11 e–f, which shows a paratype). Terminal segment divided at base into two thin straight flagella.

Variation in male paratypes ( Figs 11 View FIGURE 11 e–f, 24c). One male with pale center to labrum, shading to dark brown. The pale yellow of the genae almost connecting over the antefrons above the postclypeus in two males. Some variability in the extent of the broader anterior part of the antehumeral stripe. Sometimes a distinct pale annulus at anterior margin of S3. Yellow spots on S9 vary from several to none. 18–22 Px in FW, 16–20 in HW.

Description of female paratype ( Figs 14a View FIGURE 14 , 16a View FIGURE 16 , 17a View FIGURE 17 , 18 View FIGURE 18 e–f, 19a, 22a, 24d). Head ( Fig. 14a View FIGURE 14 ). Labrum and postclypeus shiny black. Anteclypeus bluish yellow, with two well separated black marks extending from base almost to top. Genae and base of mandibles largely white, narrowly extending over the antefrons above the postclypeus to about one-fifth in, remainder of frons matte black. Dorsal surface of head matte black, apart from two irregular lines, interrupted behind the antennae, that run from the border of the compound eyes to the front of the lateral ocelli and from there to the anterior ocellus. Two oblong pale yellow postocular spots. Antennae blackish brown, top of first segment and base of second segment pale yellow. Compound eyes in life dark brown dorsally, green ventrally, hint of blue on the border between dark brown and green.

Thorax. Prothorax ( Figs 16a View FIGURE 16 , 17a View FIGURE 17 , 18 View FIGURE 18 e–f): black, but middle pronotal lobe with large yellow marking laterally and yellow propleuron, but thick black line over notopleural suture. The posterior pronotal lobe remarkable, with an elongated, thin extension on either side that is folded upward into a vertical position, to give the impression of a two-pointed crown, and with a smaller lapel on either side of posterior margin. Synthorax ( Figs 19a View FIGURE 19 , 24d View FIGURE 24 ): mesepisternum blackish brown, with long yellow antehumeral stripe, somewhat wider at its proximal end. Mesepimeron and mesinfraepisternum black. Metepisternum yellow, with narrow black line along wing base connected to thick black line over metapleural suture, not quite reaching to below spiracle. Metepimeron yellow. Legs: Coxae and trochanters pale yellow. Femur and tibia pale yellow with black lines. Claws and spines black.

Variation in female paratype. The stripes over the dorsal side of the head separated into three parts each. The antefrons above the postclypeus is completely matte black and the prothorax is more extensively black. S8–9 paler yellow, not as orange. S10 brownish yellow. Ovipositor blackish. 16 Px in FW, 16 in HW. 2

Differential diagnosis. The combination of pruinosity on prothorax and synthorax and genital ligula with terminal segment divided at base into two straight flagella identifies this species as a member of the hayashii -group. Within that group the combination of paddle-shaped antehumeral stripes, dark abdomen with cream white appendages and S10, pruinose mark on mesepimeron, and pruinose prothorax make identification of the male of C. coronata straightforward. Coeliccia hayashii also has pruinosity on the prothorax and on the mesepimeron, but has a thin bluish yellow antehumeral stripe and deep yellow and differently shaped appendages. Coeliccia diomedea sp. nov. also has pruinose prothorax, but lacks pruinosity on the mesepimeron and lacks the paddle-sticks. Its yellow is not as pale and it has bright yellow appendages. Coeliccia duytan and C. lecongcoi are a third and fourth species with pruinosity on the mesepimeron and prothorax, but have a pruinose spot replacing the antehumeral stripe of C. coronata and bright yellow, not cream-white, appendages. Lastly, the recently described C. schorri also has pruinosity on prothorax and synthorax, but has, amongst other differences, pale blue S 8–10 in combination with whitish caudal appendages ( Phan & To 2019). The small C. mattii has largely pruinose thorax and nearly all black S8–10. The females of C. coronata , C. diomedea , C. duytan , C. hayashii and C. lecongcoi have structurally similar posterior pronotal lobes, but that of C. coronata is crown-shaped, with vertically erected lateral extensions ( Fig. 18e View FIGURE 18 ). In the other species the ‘horns’ are not as raised vertically, but expand more or less sideways ( Fig. 18 View FIGURE 18 ; Phan 2017, 2019). Coeliccia duytan also has a nipple-like protrusion on the posterior margin of the posterior pronotal lobe and the female of C. diomedea and C. lecongcoi have an additional central extension completely missing in C. coronata (but see discussion). The female of C. schorri has a single erect horn on the posterior pronotal lobe, very different from the structures of the aforementioned species ( Phan & To 2019).

Habitat and ecology. Coeliccia coronata apparently occurs in a variety of habitats in primary and degraded mountain forests in the proximity of larger and rocky mountains streams or smaller seeps, although its specific breeding habitat is unknown. It was found with a variety of representatives of the genus: near larger streams with C. caerulea , C. poungyi dasha , and C. rolandorum and near seeps with C. mattii . 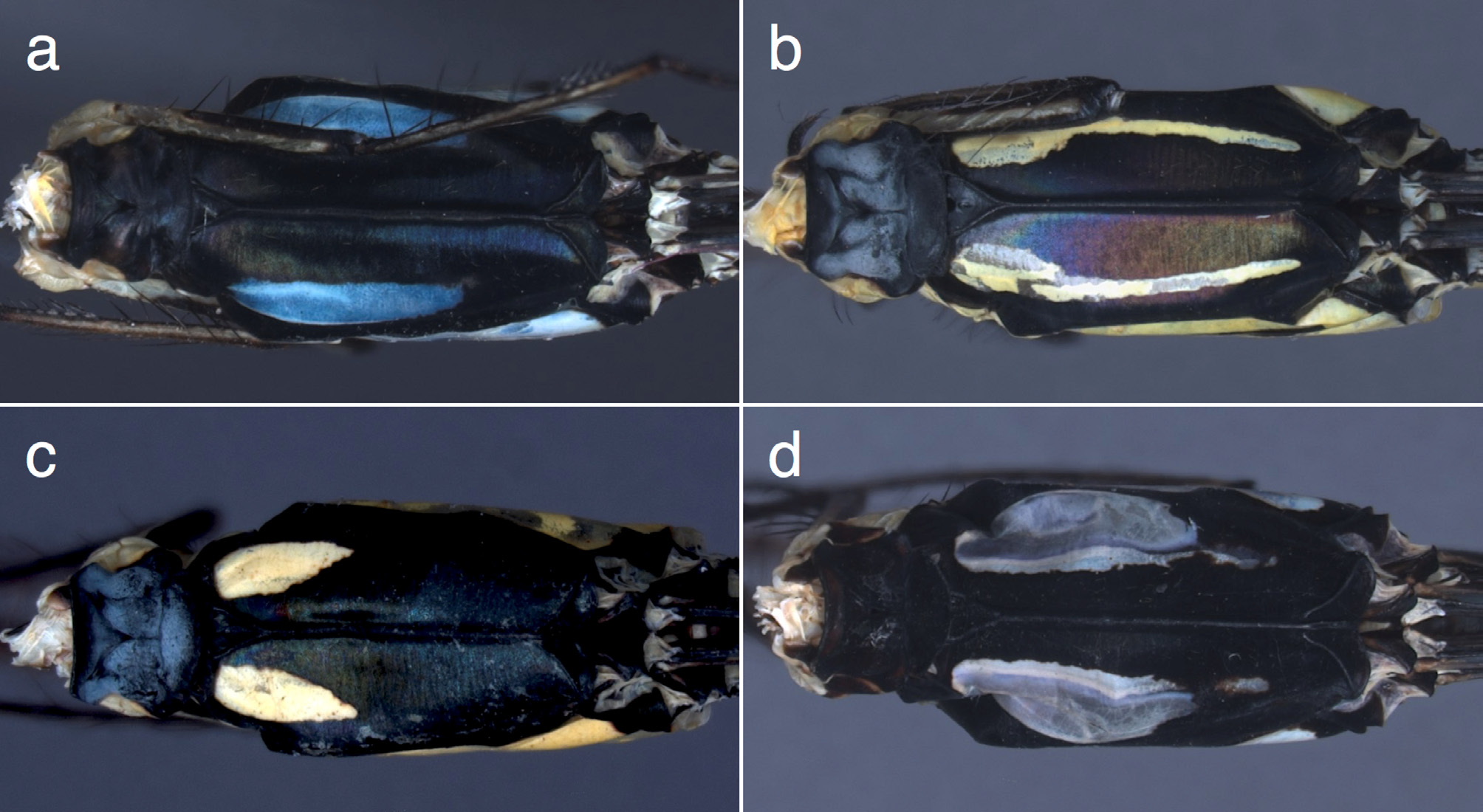 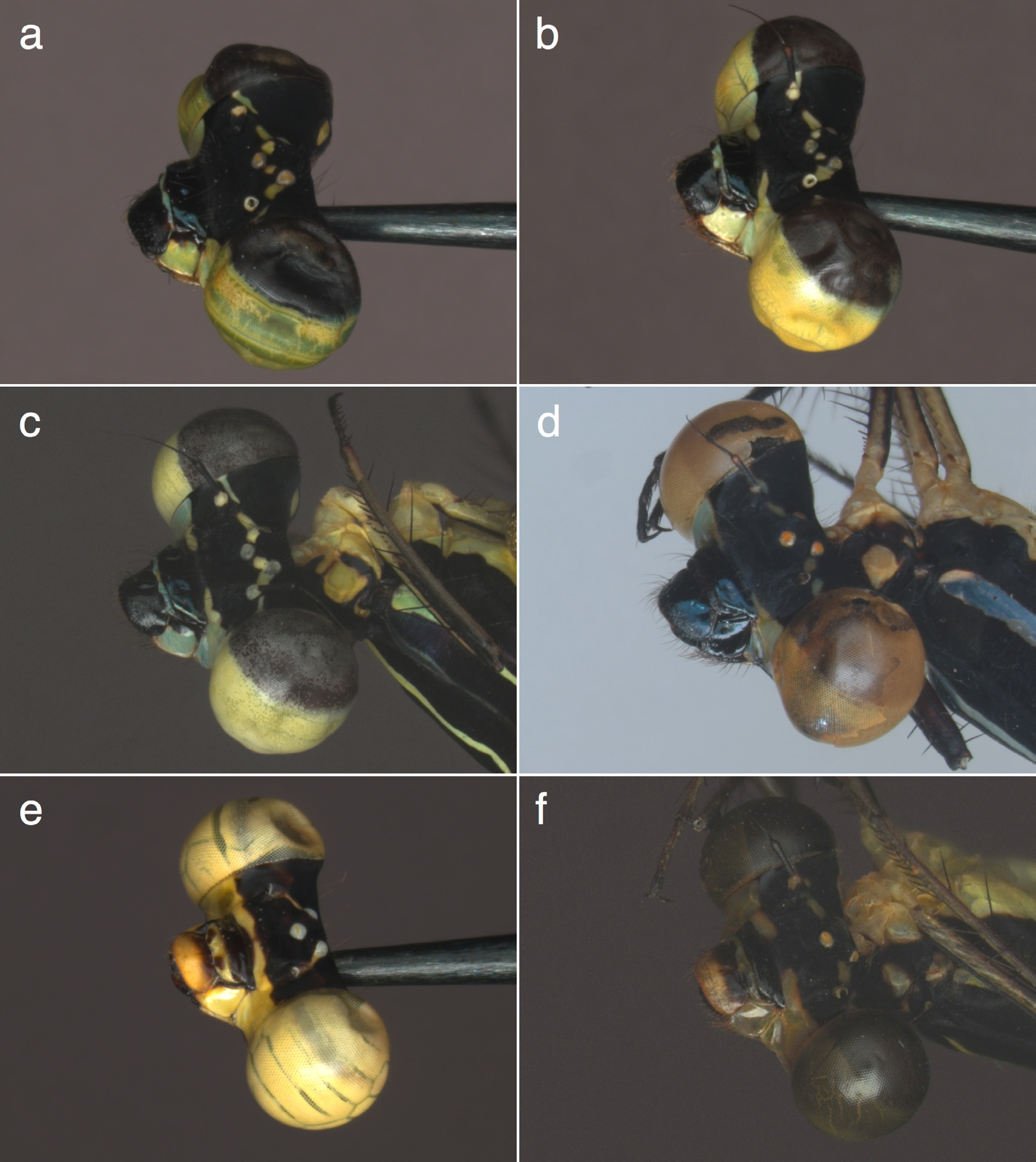