ETYMOLOGY. — This species is named to honor the late Dr M. Nechama Ben-Eliahu, in recognition of her many publications on taxonomy of polychaetes, and her efforts supporting scientific collections ( Chipman & ten Hove 2014). The name is a noun in genitive ( ICZN 1999: art. 31.1.2).

longer than lower one; neurochaetal blades bidentate, subdistal tooth smaller than distal one, but without guards.

Neurochaetae about 20 per bundle, handles honey-colored, blades bidentate, at a certain angle from handle, 3-5 times as long as wide, decreasing in size ventrally, each with smaller subdistal tooth, sharp to blunt, about 1/3 as wide as larger tooth, often eroded to blunt tips; guards completely absent ( Fig. 5EView FIG).

Pharynx not exposed. Oocytes not seen.

A small specimen (UF 3658) has anterior eyes only slightly larger than posterior ones, and acicular lobes of different length along the body; in chaetigers 1-3 acicular lobes are subequal, in chaetigers 4-7 upper tines are about twice longer than lower ones, and in other chaetigers lower tines are 1/3 as long as the upper ones. Chaetal blades lack guards completely and marginal teeth are visible in upper chaetae ( Fig. 6AView FIG), or barely visible at all ( Fig. 6BView FIG [inset]); a newly emerged neurochaetae, still with its transparent sheet ( Fig. 6CView FIG [inset]) confirms the complete absence of guards.

Another similar species is present in the Gulf of Manaar. A juvenile specimen (MNHN-IA-PNT90a [formerly jar 372]; 12 mm long, 2 mm wide), probably collected with other specimens reported by Fauvel (1929) from Krusadai Island, was found in a Tubipora  mass. This species also has acicular lobe double, and neurochaetal blades without guards. It is regarded as a different species because its anterior eyes are displaced posteriorly, diffuse, and markedly as wide as long, as two brownish short, lateral transverse bands. The specimen is macerated and better material is needed to formally describe the species. 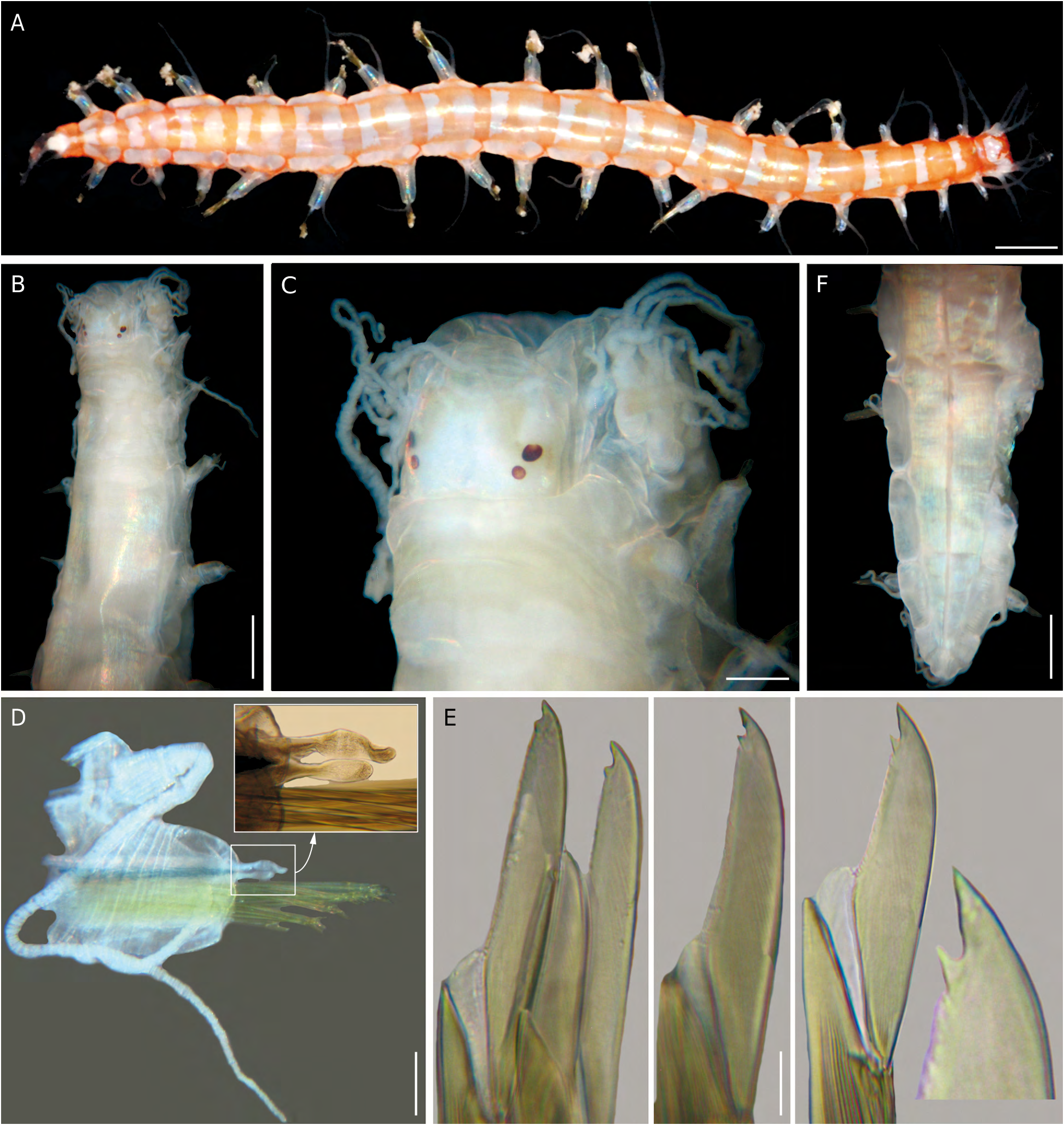