DISTRIBUTION. — Despite the fact that Fauvel recorded this species for many localities worldwide, its distribution is rather restricted to the Mediterranean region, and adjacent areas in the Eastern Atlantic, in shallow water.

Prostomium rectangular, slightly as wide as long ( Fig. 35BView FIG), anterior margin projected, posterior margin with a shallow, short furrow, about as long as 1/5 prostomial length; longitudinal depression very shallow. Antennae minute, digitate, tapered, directed laterally, as long as anterior eyes cornea, or 3-4 times as long as wide. Eyes without pigmentation, corneas distinct, anterior ones larger, placed about the median region, more distant to each other than posterior ones.

In the original description of Hesione pantherina, Risso (1826)  confused body ends and this explains why there is a discordance between the number of cirri indicated for each body end, against the number that are usually present. This confusion was noted by Audouin & Milne-Edwards (1833: 234, footnote 1). Further, Risso described the pigmentation pattern including transverse lemon-yellow bands, but these bands have not been confirmed, although paler transverse bands can be present in some specimens.

Perhaps the best account of H. pantherina  was made by Fauvel (1923a: 233); however, there are some differences between his illustrations and the observed features in the Mediterranean specimens. The main differences are: 1) the anterior prostomial margin is not incurved as illustrated if specimens have their pharynx invaginated, but appears anteriorly projected; 2) antennae are as long as interocular distance, not shorter as indicated in his illustrations; and 3) ventral cirri are markedly longer than chaetal lobes, not slightly longer as depicted in the illustrations. Neurochaetal blades, however, were well illustrated with their guards reaching subdistal tooth. These discrepancies imply Fauvel grouped different species under the same name, and this is evident from the pigmentation pattern; he indicated: “coloration assez variable, moucheté de brun et réticulé de blanc, ou tigré de taches brunes allongés ou arrondies.” (Transl.: pigmentation very variable, spotted with brown and reticulated white, or striped with longitudinal or round brownish spots).

Besides H. pantherina  , there are two other species described from the Northeastern Atlantic and Mediterranean: H. sicula  delle Chiaje, 1830 and H. steenstrupi de Quatrefages, 1866  . It must be emphasised that parapodial features, especially the type of acicular lobes, were not included for the original description of any of these three species. Saint-Joseph (1898) made a detailed illustration of parapodial and chaetal features and, quite surprisingly, he even illustrated acicular tips. Thus, his plate 19 shows that antennae are shorter than interocular distance (1898: fig. 131), acicular lobes are double and blunt (1898: fig. 135), neuraciculae are slightly capitate with distal tiny spines (1898: fig. 137), and chaetal blades are bidentate with subdistal tooth larger than distal tooth and guard approaches subdistal tooth (1898: fig. 136). As indicated below, these features match H. steenstrupi  and his material was collected in Saint-Jean-de-Luz, close to the type locality (Guethary), in the Gulf of Vizcaya.

Saint-Joseph (1898) also compared his material against specimens from Naples, close to the type locality of H. sicula  , and concluded that they were identical with his materials, leading him to conclude that the three species ( H. pantherina  , H. sicula  , H. steenstrupi  ) were synonyms and the senior synonym should be H. pantherina  . It must be emphasised that H. sicula  and H. steenstrupi  share the presence of acicular lobes double, and some other differences are needed to retain both specific names, but none has been found (see below).

On the other hand, as indicated above, H. pantherina  has acicular lobes single, and this difference is enough to keep it separate from the two other species. Fauvel (1923a: 234) followed Saint-Joseph about the synonymy, and when referring to acicular lobes, he indicated that “au-dessus des soies une ou deux petites languettes coniques, souvent rétractées” (Transl.: over the chaetae there is one or two small conical lobes, often retracted). Fauvel was actually reiterating something he had concluded before ( Fauvel 1911: 375), when he recorded H. pantherina  for the Persian Gulf, and rejected the use of acicular lobes as diagnostic features: “j’observe à cet égard une grande variabilité, non seulement d’un individu à l’autre mais encore d’un parapode à l’autre sur un même animal.” (Transl.: I observe about this (acicular lobes) a large variability, not only from one specimen to the other but even from one parapodium to another one in the same specimen). This is incorrect. After a comparison of the corresponding illustrations ( Fauvel 1911: 375, fig. IV), it is clear that parapodia were mounted differently, as indicated by the relative position of the ventral cirri, such that if these parapodia came from the same specimen they were probably drawn from different perspectives, or worse, they belong to different specimens.

Pleijel (1998: 159) indicated that “ H. sicula  delle Chiaje, 1822” could be a junior synonym of Hesione pantherina Risso, 1826  . If they are really the same species, the senior synonym should be H. sicula  ; the contrary perspective rejects the principle of priority ( ICZN 1999: art. 23), but as indicated below, the type of acicular lobe separates these two species. Further, the correct publication date for H. sicula  is 1830, as part of a series of plates, as indicated below. 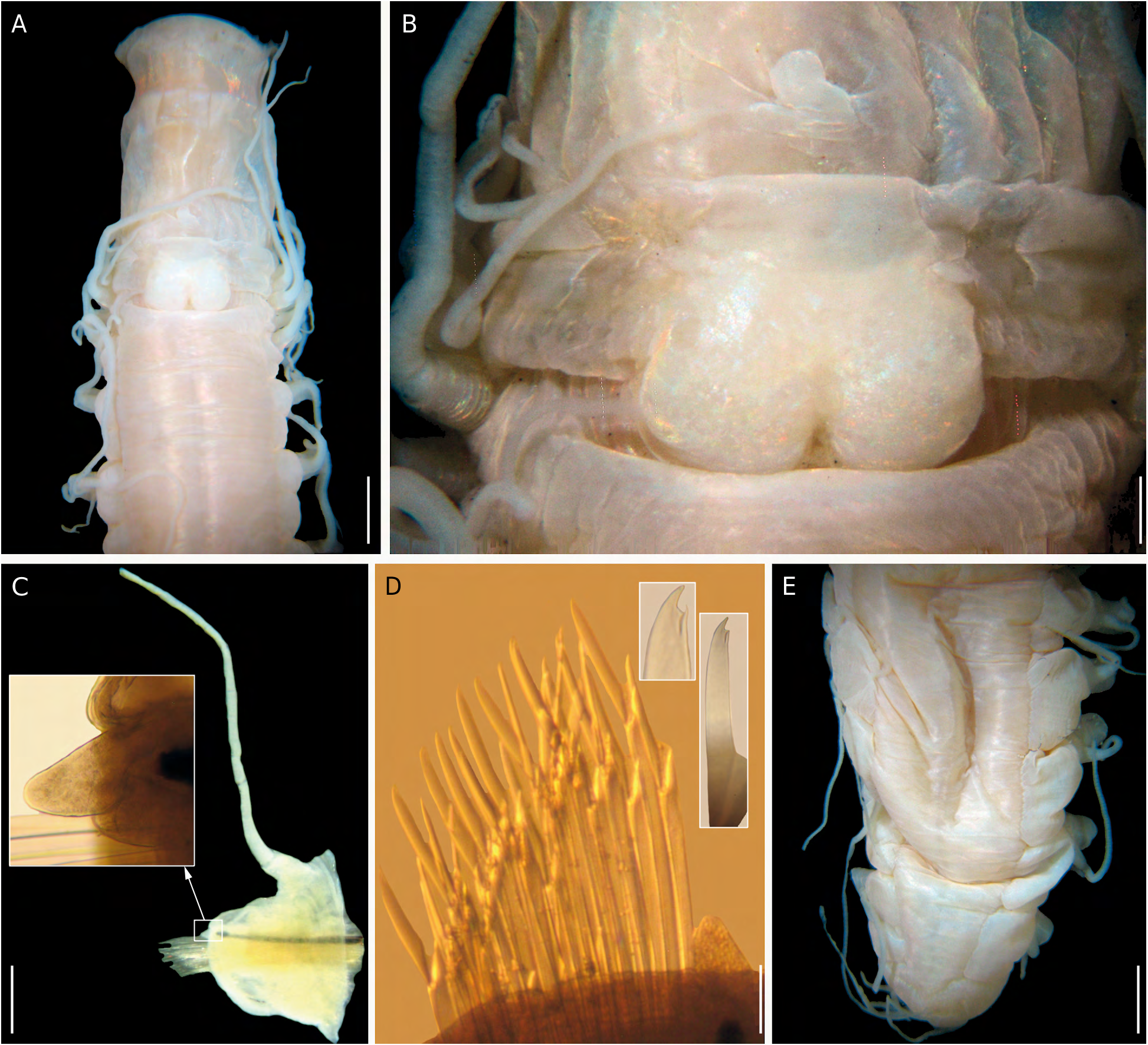 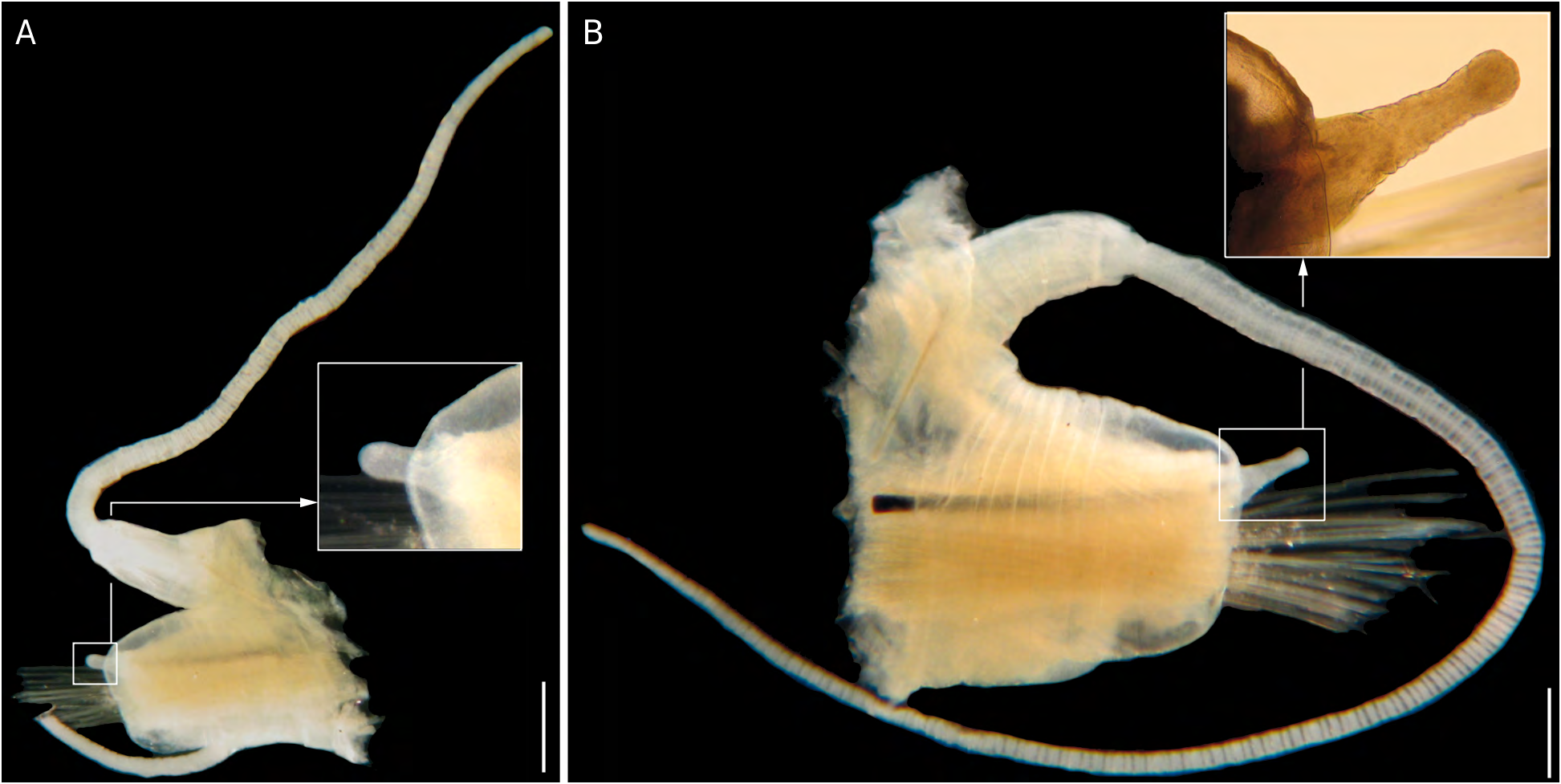