DISTRIBUTION. — This subtidal species is rarely found in sediments, up to 32 m water depth, from the Northern Mariana Islands to the French Polynesia and New Caledonia. The record for Hawaii by Treadwell (1906: 1149) rather matches H. genetta  by sharing a dark brown transverse band on chaetiger 2 (see above).

Neurochaetae about 20 per bundle, most trimmed, probably during ventral dissection, some with neurochaetal blades fragments, or blades lost ( Fig. 30CView FIG [inset]).

Pharynx not exposed. Oocytes about 100 µm in diameter.

Hesione pacifica McIntosh, 1885  , reinstated, was described with a single specimen (holotype). It was in good condition, without pigmentation pattern, but all neurochaetal blades were lost, probably as an indirect consequence of his dissection to observe the pharynx. McIntosh made two illustrations for the species (reproduced herein as Figure 31View FIG), one was a dorsal view of the whole specimen, showing all tentacular and dorsal cirri ( Fig. 31AView FIG), probably before dissection, and the other was an anterior parapodium ( Fig. 31CView FIG). The original prostomium was enlarged because it was too small in the original ( Fig. 31BView FIG); the prostomial posterior margin has a shallow furrow and the antennae were illustrated as long, tapered filaments, 5 times as long as wide and longer than the distance between lateral eyes, but these features can only be noticed by using a hand lens over the original plates, or by observing it with a stereomicroscope. Further, the parapodium was illustrated but no acicular lobes were indicated, although the details for cirri are adequate. Once the relative size of antennae is observed, his remarks are easier to understand. He indicated that H. pacifica  approaches H. intertexta  but that they differ by the size of antennae, being longer in the former and shorter in the latter, and in their neurochaetal blades, because the subdistal tooth is larger in H. pacifica  than in H. intertexta  .

As indicated in the key below, the presence of subdistal teeth as wide as distal ones, groups H. pacifica  with three other colorful species: H. genetta Grube, 1864  restricted, H. mooreae  n. sp., and H. paulayi  n. sp. Because the pigmentation pattern is long lasting in the latter three species (up to 100 years), and no pigmentation has been reported in H. pacifica  , this is the main difference to sort them out. McIntosh and Chamberlin, studied their specimens 10-20 years after they were collected, and the latter also found H. genetta  within the RV Albatross material.

Further, one specimen from the Mariana Islands (USNM 26069) was collected by the end of 1948, and Olga Hartman saw it 5 years after sampling, while preparing her paper on that archipelago ( Hartman 1954); no pigmentation was evident then, and none is visible now ( Fig. 32AView FIG), but this would be the shortest time span between collection and identification, such that its pigmentation, if any present, must fade rather soon in comparison to the long-lasting pigmentation in specimens of both H. genetta  and H. paulayi  n. sp.

After the study of the best preserved specimen (USNM 26069, 26 mm long), some additional observations include: 1) antennae can appear shorter and even biarticulate if they are directed ventrally ( Fig. 32BView FIG); 2) dorsal cirri can be longer than body width including parapodia, and that ventral cirri often projects beyond neurochaetal tips ( Fig. 32CView FIG); 3) acicular lobes are double with the upper tines twice longer than lower ones ( Fig. 32CView FIG [inset]); and 4) there are about 20 neurochaetae per bundle, blades are 2-3 times as long as wide, bidentate with subdistal tooth slightly smaller than distal one, with guards approaching subdistal tooth ( Fig. 32DView FIG [inset]). Neurochaetal blade size was in a smaller range in H. pacifica  (2-3 times as long as wide) than in H. genetta  or H. paulayi  n. sp. (3-5 times as long as wide). 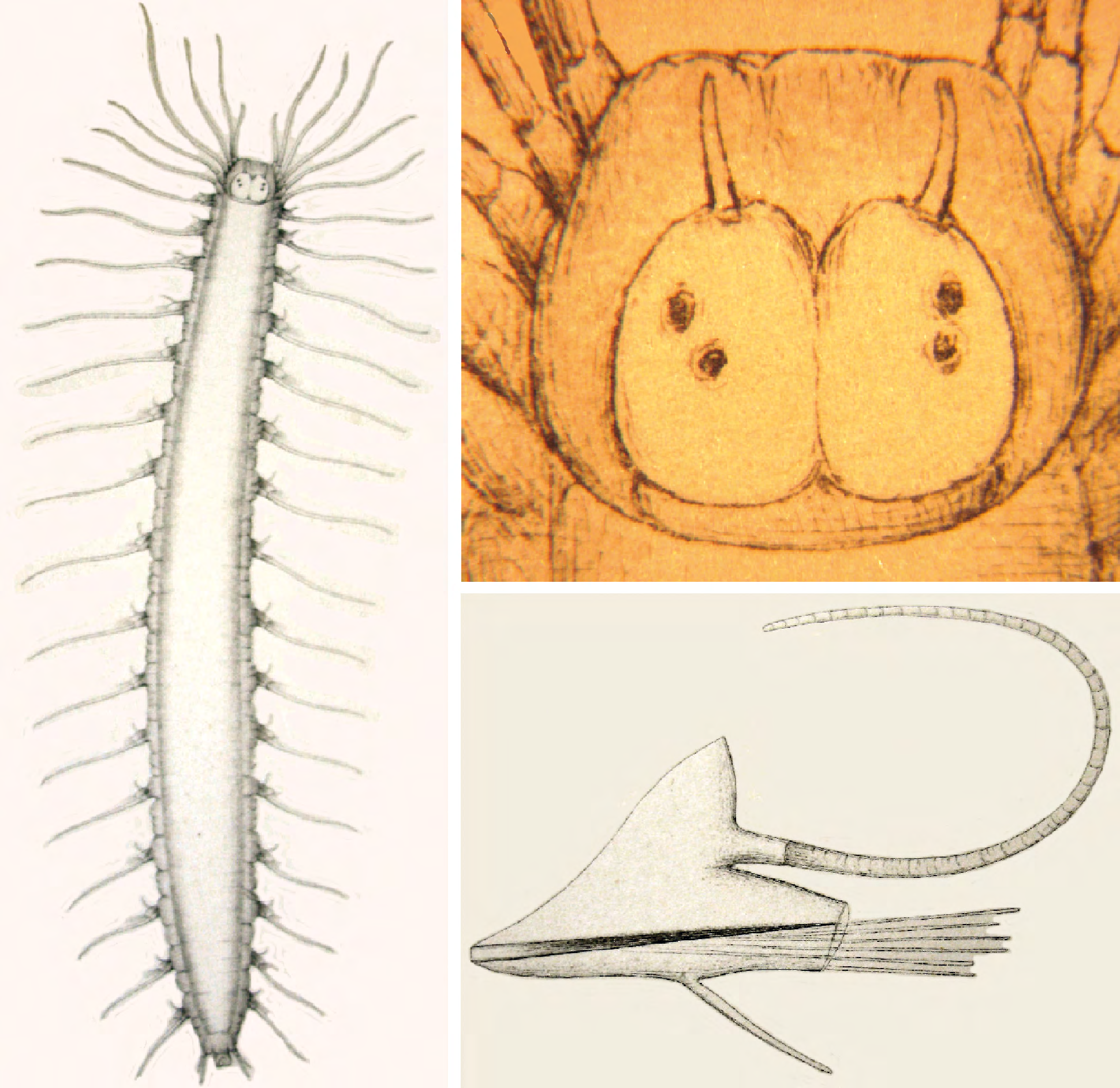 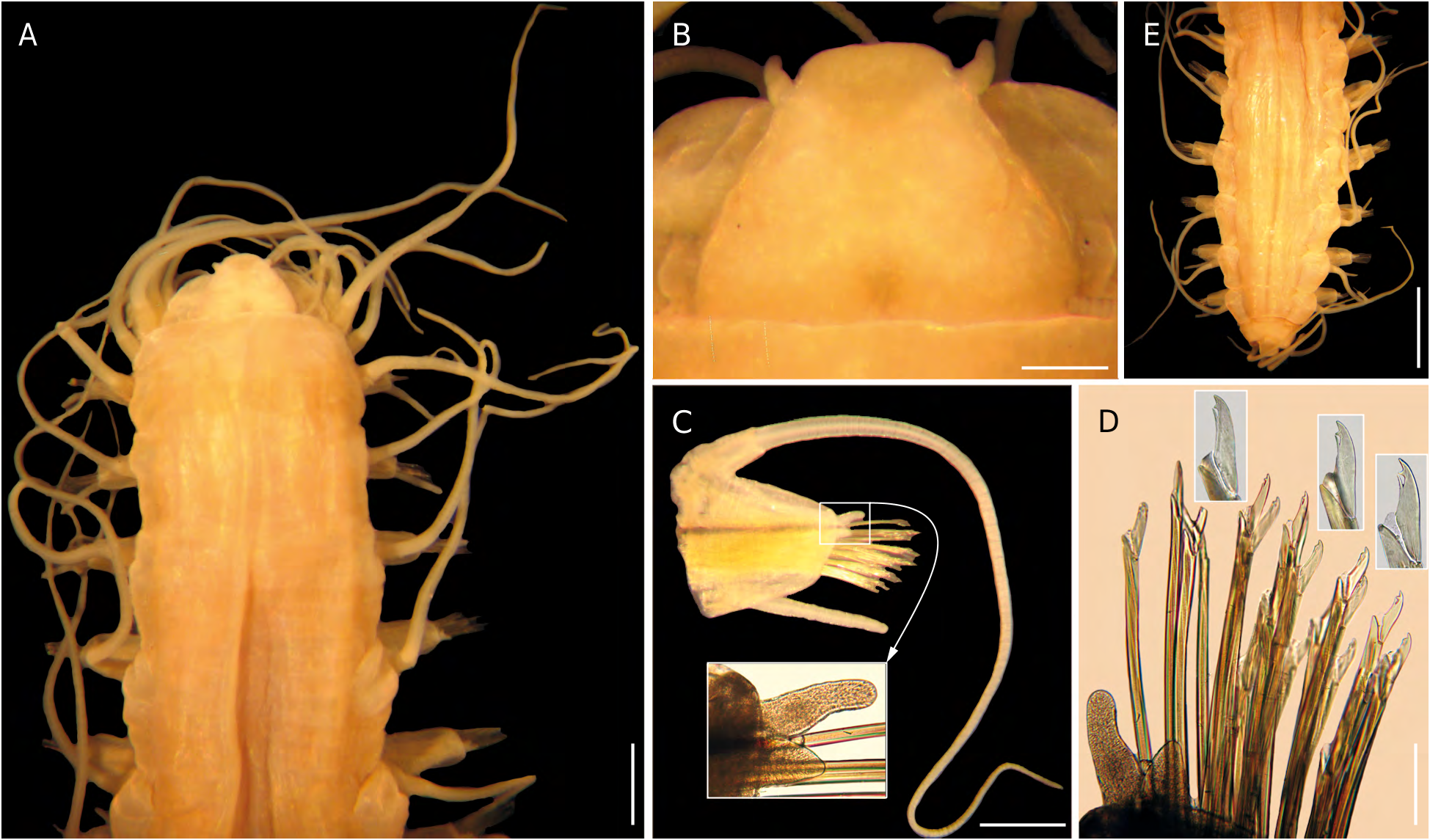