ETYMOLOGY. — This species is being named after Stephen Keable, Curator of Marine Annelids, Australian Museum, Sydney, in recognition of his unrestricted support to our research activities in Mexico and elsewhere. The name is a noun in genitive ( ICZN 1999: art. 31.1.2).

DISTRIBUTION. — Indonesia to the French Polynesia, in coral to mixed substrates, mostly in shallow water but one specimen found in 80-120 m depth.

Neurochaetae about 25 neurochaetae per bundle, honeycolored, most without blades, blades bidentate, 3-4 times as long as wide, subdistal tooth smaller, margin denticulated; no guards.

Pharynx not exposed. Oocytes not seen.

One small specimen, MNHN-IA-PNT98b (formerly jar Musorstom 100DW), herein regarded as conspecific is shown in figure 28. This identification takes into account a posteriorly expanded prostomium and well-developed lateral cushions ( Fig. 27AView FIG), poorly defined eyes ( Fig. 27BView FIG), dorsal cirrophores twice as long as wide and acicular lobes blunt, of similar size ( Fig. 27CView FIG). However, there are two small differences. A few chaetal blades show a slightly longer tooth along its cutting edge ( Fig. 27DView FIG [inset]), and because they are in the same position where guards typically are, they could be regarded as tiny guards or as elongated teeth. Another difference refers to the depth where this specimen was found because it was collected in deeper water (80-120 m). To better define its status as the same or as an independent species requires more and better specimens, but it is herein regarded as conspecific.

Hesione keablei  n. sp., together with H. beneliahuae  n. sp., differ from all other species in the genus because their neurochaetal blades have no guards at all. These two species differ, however, because H. keablei  n. sp. has dorsal cirrophores twice as long as wide, its prostomium is wider posteriorly, and the eyes are poorly defined, whereas in H. beneliahuae  n. sp. the dorsal cirrophores are as long as wide, the prostomium is rectangular, and the eyes are well-defined.

Monro (1931: 11-12) recorded a similar species after a single specimen collected during the Great Barrier Reef Expedition, in Jukes Reef. He indicated it was a “well-preserved specimen measuring” 54 mm long, 5 mm wide, that it had “a square dorsal mark paler in color than the rest of the body”, and “two fingershaped retractile processes” as acicular lobe. For chaetal blades he emphasised: “I cannot find any trace of a chaetal guard on the blades.” Regretfully, this specimen was not found during a visit to the Natural History Museum, London. Monro (1931: 12) also referred to an earlier record by Pruvot (1930: 29). Pruvot found another large specimen (46 mm long) of an unidentified species whose chaetal blades did not have guards. This specimen differs from H. keablei  n. sp., however, by having acicular lobes single, and long neurochaetal blades. So it may belong to another species, probably close to H. intertexta  ; such a large specimen was not found in Paris, but other specimens from the same study were regarded as belonging to H. intertexta  . The record by Fauvel (1922: 493) as H. pantherina  of two colorless specimens collected in the Wallaby Archipelago (13°22’6.57”S, 141°41’40.83”E) could not be confirmed. 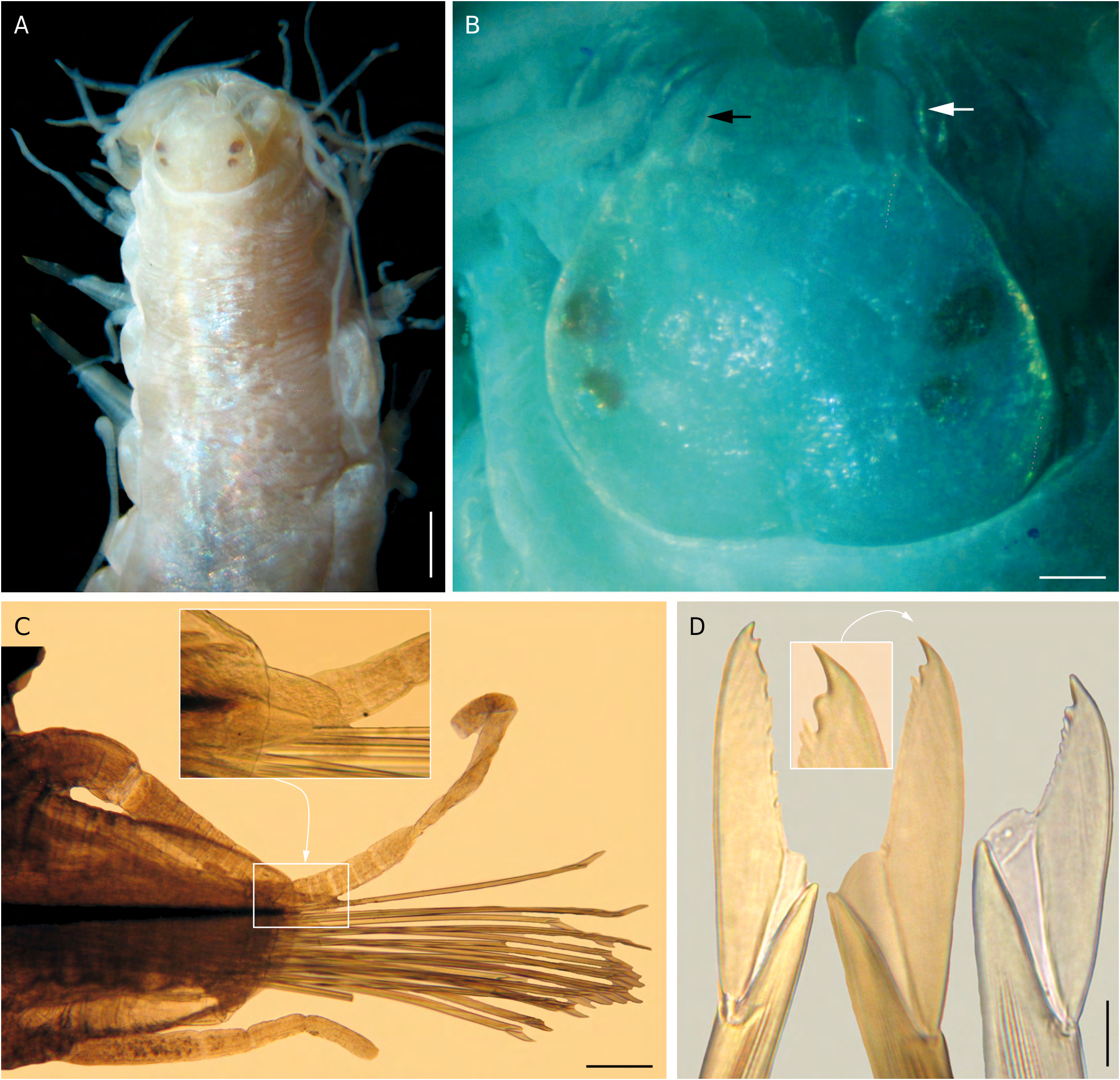