Note. The following description is based the type series.

Dorsum. Derm rather uniformly sclerotised, with minute pale spots, each 1–3 µm wide, throughout except marginally; with a band of large areolations submarginally, these becoming smaller and more obscure medially. Marginal radial lines absent but their position marked by setae and pores, with 13 between anterior stigmatic clefts, each side with 5 between clefts and 13 on abdomen; with long clear stigmatic rays extending medially from each stigmatic cleft. With 4 or 5 abdominal clear areas, but without a clear area anteriorly near each anterior stigmatic ray. Dorsal setae each spinose with a capitate apex, each 6.0–7.5 µm long, scarse (only 1 located on holotype specimen), frequent on other specimens in each marginal radial line but otherwise absent. Preopercular pores, each convex and 2.5 µm wide, present as follows: CA1 & CA2 with 0; CA3 with 0–5, CA 4 7–21 pores. Small simple pores few, present in a very sparse polygonal pattern, perhaps present throughout but most obvious marginally and submarginally, particularly in each marginal radial line; each pore situated in a pale area of derm about 3–7 µm wide. Larger dorsal pores not noted. Papillate dermal extensions (fleshy spines?) in a submedial band, each extension up to 5–10 µm long and about 2 µm wide, generally abundant, particularly on abdomen where band broadest, becoming narrower and papillae fewer more anteriorly; absent submarginally and only a few present medially, possibly in transverse lines and just anterior to anal plates (throughout dorsum on some Piper   sp. specimens). Anal plates elongate, together narrowly quadrate, with anterior and posterior margins subequal in length; each plate with 3 minute setae near posterior apex plus 1 or 2 small pores medially; length of plates 150– 285 µm, combined width 136–185 µm. Anogenital fold with 2 or 3 minute setae at each corner of anterior margin, each lateral margin with 1 seta at anterior end and another posteriorly.

Margin. Marginal ornamentation present as groups of short dark, narrow radial lines or corrugations, usually with 4–7 groups between 2 marginal setae. Marginal setae fan-shaped, mostly almost round; width of each fan about 25–43 µm, length 26–33; with about 85–124 setae anteriorly on head between anterior stigmatic clefts; each side with 34–62 between stigmatic clefts and 6 4–103 on abdomen. Stigmatic clefts deep and narrow, each sclerotised along entire inner margin, with 3 elongate, rather narrow, blunt, sometimes slightly bent, stigmatic spines, median spine usually longest, each 35–55 µm long, lateral spines each 28–40 µm long. Eyespots: each socket about 85 µm wide, diameter of lens 30–35 µm.

Venter. Derm membranous, with a pale marginal band about 35–65 µm wide. Multilocular disc-pores frequent on either side of genital opening and on preceding two segments only, each side with 11–24 on abdominal segment VII, 16–33 on segment VI and 12–24 on segment V. Spiracular disc-pores present in a narrow band mostly 1 pore wide between margin and each spiracle, with 10–17 pores in each anterior band, 5–18 in each posterior band with a broad area without pores in middle part. Ventral microducts minute, present near labium, very sparse elsewhere. Ventral setae: with 1 or 2 pairs between antennae and with pairs of long pregenital setae on segments VII –V (that on VII 50 –110 µm long); small setae frequent submarginally in radial lines, otherwise very sparse. Antennae reduced to 3 segments (terminal 4 segments all fused), total length 108–170 µm; scape with 1 or 2 hair-like setae, pedicel with 1 hair-like seta, hair-like setae otherwise absent. Clypeolabral shield 95–105 µm long. Spiracles: width of each peritreme 26–45 µm. Legs entirely absent.

Comments. Adult female D. papillatum   spec. n. are immediately recognisable by the presence of numerous small fleshy dermal papillae which cover much or nearly all of the dorsum; however, the material studied in detail above varied fairly significantly. Some specimens off Piper   from Malaysia ( Sarawak) differed from the holotype in that the fleshy dermal papillae were present more or less throughout the dorsum and these specimens also tended to have more preopercular pores. Also, compared to the holotype, some Sarawak specimens also tended to have: (i) far fewer marginal setae; (ii) many more preopercular pores, and (iii) smaller anal plates and spiracles. Despite these differences, it is considered that the Sarawak material is conspecific with the holotype and merely shows regional variation. On the other hand, the specimens from Brunei ( Fig. 18 View FIGURE 18 ) and some from Sarawak tended to have many fewer papillae and the papillae appeared to be rather short, appearing more like a sclerotised ring but with some depth when focussing.

Adult female D. papillatum   belong to a group of Discochiton   species that lack leg stubs and have preopercular pores associated with the posterior one or two clear areas only. The other two species which have this combination of character-states are D. malainum   and D. sarawakense   , the latter described as new below.

Name derivation. The species name papillatum   (from the Latin adjective papillatus -a, -um, meaning bud or nipple) refers to the numerous short fleshy papillae on the dorsum. 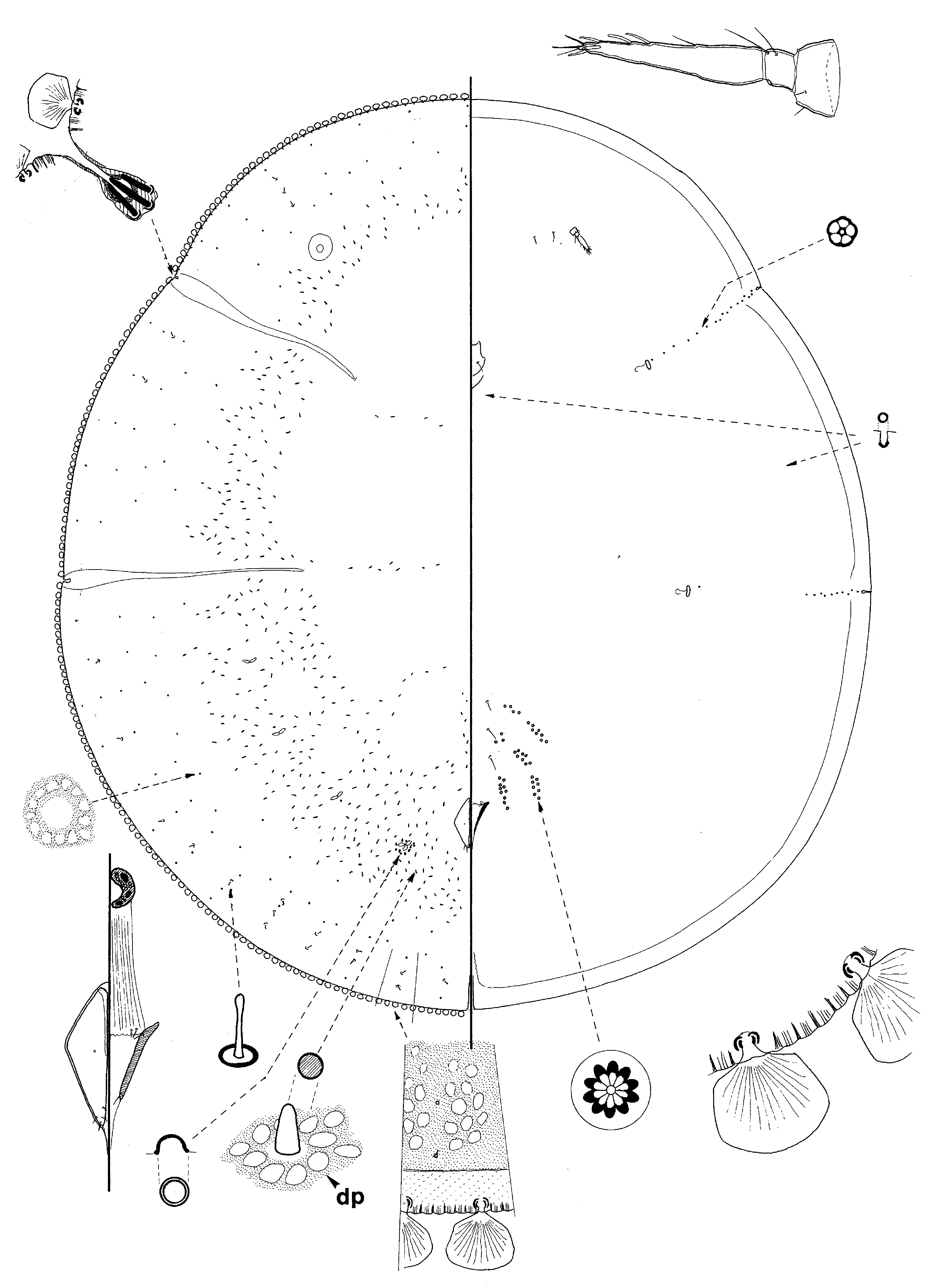 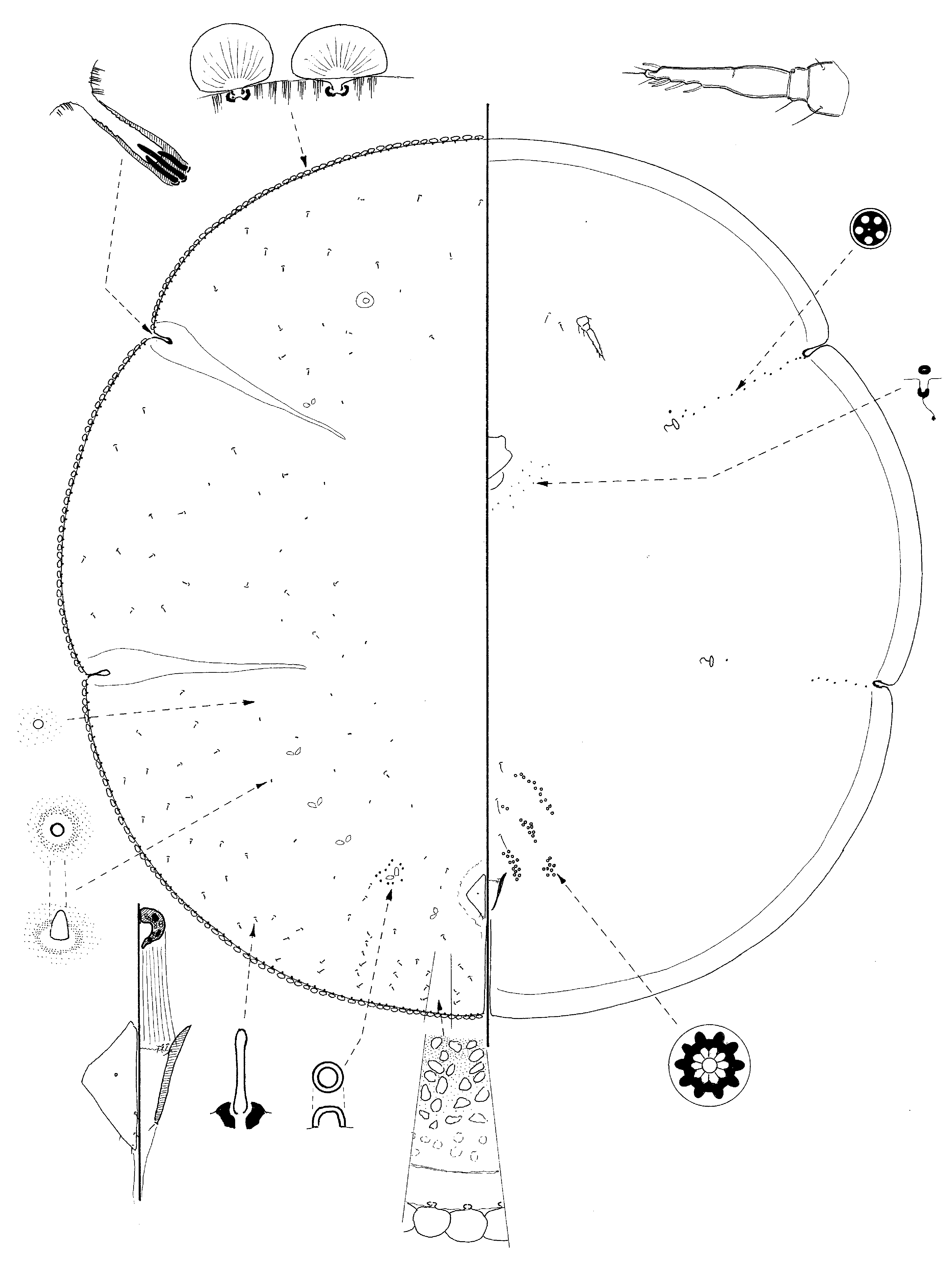