Legs, general aspects ( Figs. 9–16 View FIGURES 9 – 20 , 21, 22, 27–29): Relatively long (legs I and IV each approximately 0.6 body length), slender, with large apophysis distally on tibiae I and II and at midlength of tarsus I, bearing respective solenidia ( Figs. 9, 10 View FIGURES 9 – 20 , 27–29). Distally, tarsi extremely narrowed, with obvious sclerotization ending well proximal to claws, continued as apparently flexible, hyaline stalk bearing setae (p) and tridactylous apotele (Fig. 27). Terminal soft cuticle without pulvillus. Lateral and empodial claws well-developed, approximately equal in size and form, each with at least two dorsal rows of short spines. Proral (p) setae of tarsi II–IV and all unguinal (u) setae with comb of long, fine cilia along ventral side. Tarsal lyrifissures displaced antiaxially; on legs I and II located under distal projection of tibia and difficult to observe (on leg I, observed only in specimen MGCP Ar 89 where cuticular remnant of tarsus shrank from articulation). Some lateral setae strongly curved and barbed along dorsal side; other setae more or less curved and barbed, some covered with granules of cerotegument. Setal homologies indicated in Table 1 View TABLE 1 .

tures are indicated for the instar in which they were first observed and are present in subsequent instars. 1 1 Setae in parentheses represent pairs; dash indicates no additions;? indicates poorly visible, but no additional setae were discerned. La, Tn, Ad = larva, tritonymph, adult, respectively.

2 Seta e (famulus) was not discerned in the larva but probably is present; among extant oribatid mites it is not known to be absent from tarsus I.

3 Setae and solenidia in this row are present on tritonymphs, but as no protonymphs or deutonymphs were available for study they may have been added in any of the nymphal instars. Among extant oribatid mites, setae are rarely added between larva and protonymph.

Integument ( Figs. 42–45 View FIGURES 36 – 46 , 47– 50 View FIGURES 47 – 50 ): Foveolate in epimeral region, foveolate or reticulate on legs, rough with small folds in centrodorsal areas of scalps, almost smooth on prodorsum. Cerotegument macrogranular (granules up to 2.5 µm) on legs, on anterior and central parts of prodorsum, on pedotecta and in gastronotic region; microgranular (granules up to 0.5 µm) on dorsal side of prodorsum anterior to bothridia and in dorsosejugal fold; not discerned in epimeral region.

Gastronotic region ( Figs. 42, 43 View FIGURES 36 – 46 , 47, 50 View FIGURES 47 – 50 ): Cuticle with system of large folds, most accentuated in region lateral to exuvial scalps. Three tightly appressed exuvial scalps in rather flat and strongly eccentric stack; each centered well posterior to scalp underneath. Each scalp bears few cerotegument granules anteriorly; transverse anterior fold and pair of folds running posteriorly from humeral region form angle in humeral area of each scalp, especially visible on dry specimens ( Fig. 42 View FIGURES 36 – 46 , right half); larval scalp (SL) plicate throughout. Setation of scalps probably only partly discerned; all visible setae minute. Larval scalp with alveoli of setae c 1, c 2 and da discernable; on ventral side, pair of very thin setae (? on Fig. 50 View FIGURES 47 – 50 ) may represent dp of larval scalp. On protonymphal (SPN) and deutonymphal (SDN) scalps, three pairs of minute setae discernable, those on SDN being about twice length of those on SPN. Visible tritonymphal setae include c 1, c 2 (not less than 6 µm each), curved, slightly rough, c 3 (not shorter than 18 µm), with thin barbs, and apparently smooth p 3 (at least 6 µm long) on ventral side. No cupules or glands discernible.

Legs, general aspects ( Figs. 42–44, 46 View FIGURES 36 – 46 , 51–60 View FIGURES 51 – 60 ): Long, tarsi with well-developed ambulacral stalk, pulvillus and strong empodial claw. Complement of setae and solenidia indicated in Table 1 View TABLE 1 . Setae (p) of legs II–IV and all setae (u) with ventral comb of thin cilia, other setae either strongly curved and well-barbed or curved only slightly and almost smooth. Porose areas present on all femora and (uncertainly) on trochanters IV.

Designation of neotype for Plategeocranus sulcatus ( Karsch, 1884)   . In the original description of Nothrus sulcatus, Karsch (1884)   mentioned no type or other individual specimen. Along with his redescription of the species and the proposal of Plategeocranus, Sellnick (1918)   noted that Karsch’s specimens were already impossible to locate, and listed seven non-type specimens from Königsberg University's collection (now themselves lost) on which his work was based. In his second work on amber oribatid mites, Sellnick (1931) listed two specimens of P. sulcatus   from the Klebs collection and 10 from the Fritsch collection. Eight of the latter are now housed in two museums in Kaliningrad (see Introduction and Materials); as they were certainly viewed and identified by Sellnick, we believe these to be the best choices for designation of neotype and paraneotypes.

Two amber pieces with Plategeocranus sulcatus   (one polished piece and one slide-mounted), which we were told came from the Königsberg collection, are now housed in the GMUG (numbers G 3.167 and # 33016 respectively). Specimen # 33016 (Fig. 22) is particularly good, the best specimen we examined in this study. However, their numbers cannot be linked to samples referred to by Sellnick (U 35–41) in 1918.

For neotype we designate specimen # 39 in the MWO collection (number 186 in the original Fritsch collection). Of the eight specimens, this shows the most complete set of characters ( Figs. 61–63 View FIGURES 61 – 63 ). Visible on the prodorsum are the pedotecta, the system of lamellar and tutorial ridges, setae ro, le, in, bo and bothridia. The gnathosoma is obscured by a large bubble and the ventral surface is partly obscured by "mist"; however, half of the epimeral region is visible and the anal and genital openings can be vaguely perceived through the mist. The notogaster shows all major folds and ridges, humeral angles and smaller folds in its anterior part. Legs readily show shapes and proportions of segments, claws and some strongly curved setae; large apophyses on tibiae and tarsi I are also visible, though orientation is not favorable. We designate as paraneotypes the remaining seven specimens listed by Sellnick (1931): KMA specimens 197 - 22 [55?; see Remark 5, below] and 197 - 54 [54], and MWO specimens 22 [226], 30 [178], 33 [223], 35 [123] and 37 [224]. 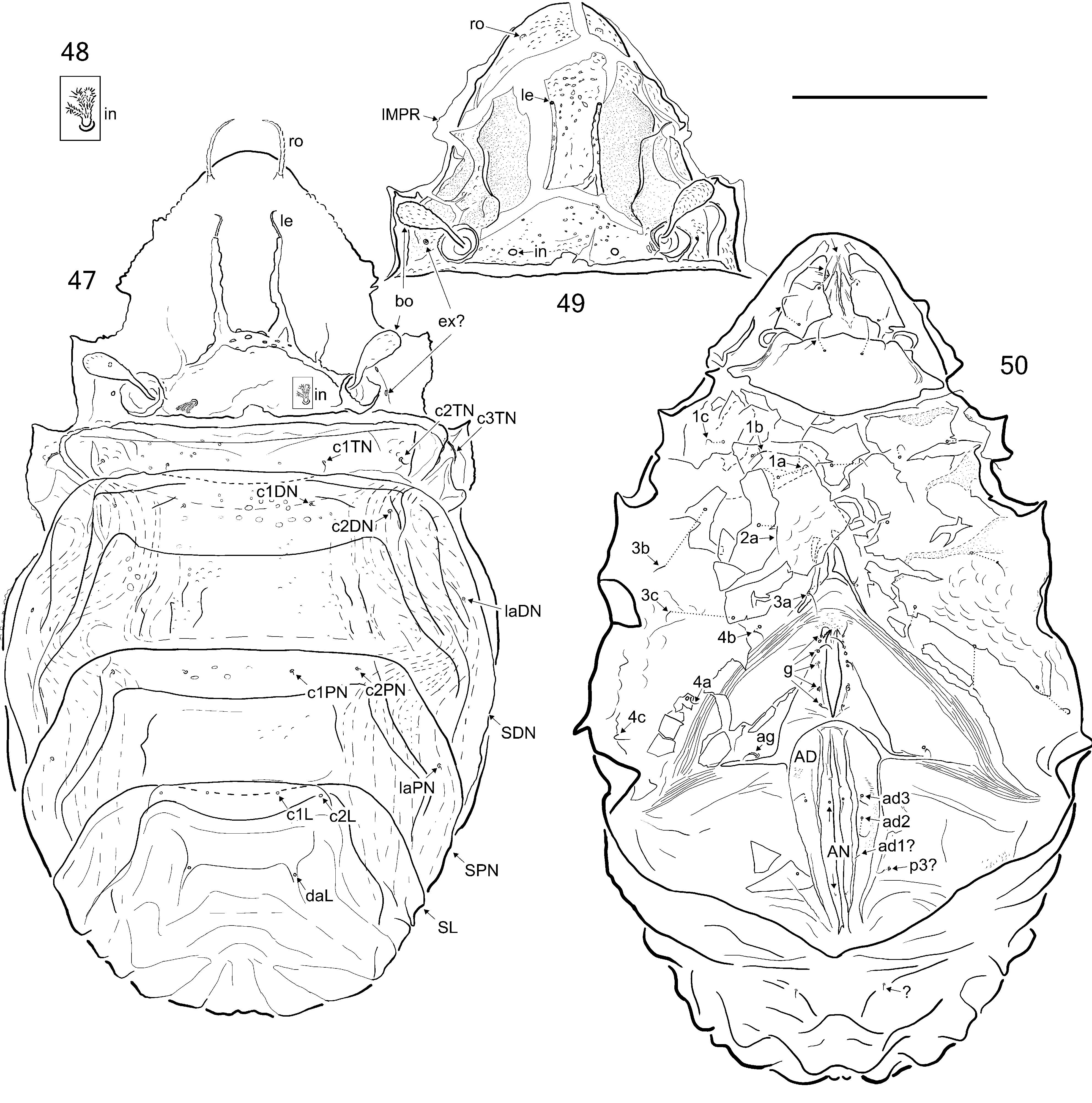 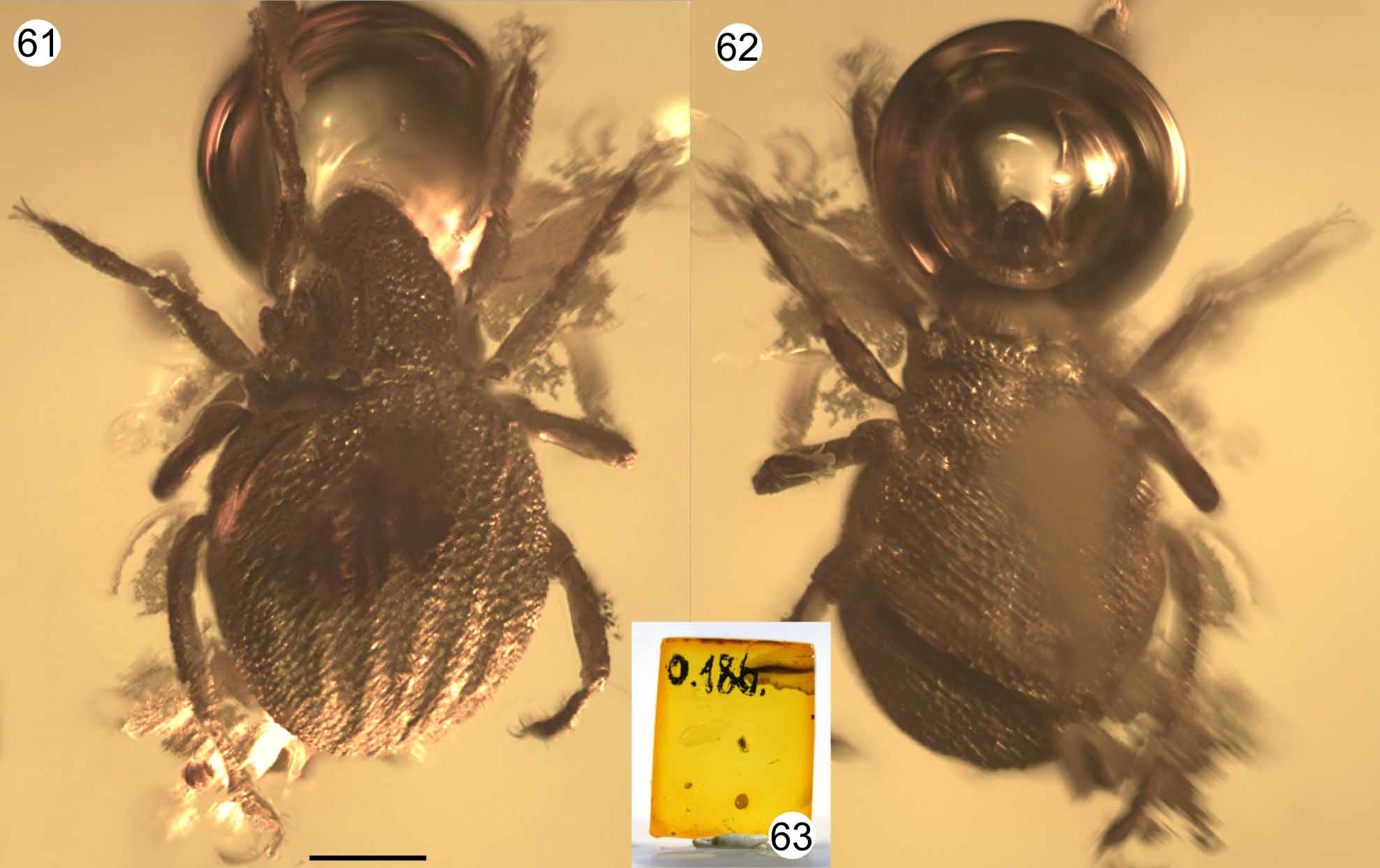