Description. Female (holotype). Body robust, medium sized for genus. Antennae filiform, 16 -segmented; antennal bases situated on the level of lower margin of eyes. Length of antennae 1.2 times longer than length of fore femur; mid segments of antennae 4.6 –5.0 as long as wide. Eyes not protruding above vertex in lateral view. Lateral ocelli placed near the middle of eyes. Fastigium of vertex behind lateral carinae almost flat, distinctly produced in front of eyes from dorsal aspect, 2.3 times wider than width of one eye from above; anterior margin of fastigium broadly rounded, median carina of fastigium reaching the middle of eyes; lateral carinae elevated. Frontal ridge in lateral view slightly concave near the lateral ocelli and distinctly concave below antennal sockets. Width of frontal ridge near base of antennae 2.3 times more than width of 1 st antennal segment. Pronotum rugulose, reaching the middle of hind femora; anterior margin of pronotum in dorsal view gentle angularly projecting; apex of the posterior process of pronotum in dorsal view with weak excision. Median carina of pronotum in profile arch-like; triangular in cross-section. Lateral carinae of pronotum in prozona well defined; prozona almost as long as wide. Disc of pronotum with one pair of short longitudinal carinae between shoulders. Hind margin of lateral lobes of pronotum with lower sinus only; posterior angles of lateral lobes in dorsal view truncated. Tegmina and hind wings absent. Fore and mid femora with sinuate and finely serrate lower carinae; upper carinae almost straight. Fore femur 2.8 times, mid femur 2.9 times as long as wide. Hind femora stout, 2.4 times as long as wide; upper and lower carinae finely serrate; lower outer keel of hind femora without projections. Upper side of hind tibia with 5 outer and 7 inner teeth and numerous denticles between them. First tarsal segment of hind legs 2.8 times longer than 3 rd segment (without claws). Subgenital plate as long as wide, with strongly angularly projecting posterior margin. Cerci conical, 2.1 times as long as wide near base, with rounded apex. Valves of ovipositor narrow, dentate. Upper valve of ovipositor 4.0 times longer than its maximum width; lower valve of ovipositor 4.7 times longer than its maximum width.

Male (paratype). Similar to female. Antennae 15 -segmented; length of antennae 1.4 times longer than length of fore femur; mid segments of antennae 4.5 -5.0 times as long as wide. Fastigium of vertex 2.2 times wider than width of one eye from above; anterior margin of fastigium in dorsal view straight, median carina of fastigium almost reaching the posterior margin of eyes. Width of frontal ridge near the base of antennae 2.3 times more than width of 1 st antennal segment. Pronotum as in female, posterior process reaching the hind margin of 4 th tergite. Tegmina and hind wings absent. Fore and mid femora as in female. Hind femora as in female, 2.7 times as long as wide. Upper side of hind tibia with 4 outer and 6 inner teeth and with numerous denticles situated as in female. First tarsal segment of hind legs 2.7 times longer than 3 rd segment (without claws). Epiproct narrow triangular, 1.5 times as long as wide near the base, with pointed apex. Subgenital plate in lateral view short triangular with pointed apex; in ventral view apex of plate broadly rounded. Cerci 1.8 times as long as wide, widened near the base and narrow in apical third, with rounded apex.

Colored as female, but hind tibiae black with brown ring near the base. Abdomen from above black with two light brown longitudinal stripes. Sternites brown; subgenital plate and epiproct light brown; cerci brown.

Diagnosis. The new species is easily distinguished from congeners by the very short pronotum (in all other species of the genus Pseudepitettix   from China the posterior process of the pronotum reaches the apex of the abdomen or at least the base of the epiproct in both sexes). It is further delimited by the width of the fastigium of vertex, the triangular anterior margin of pronotum, the presence of a pair of short longitudinal carinae on the disk of pronotum, and the sinuate lower side of the fore and mid femora. The new species is most similar to P. nigritibis   from the Guangxi Zhuang Autonomous Region of China, but clearly distinguished from latter in the shape of the posterior process of the pronotum and the color of the hind tibiae (in P. nigritibis   the apex of the posterior process in dorsal view is triangularly rounded and the posterior tibiae are black with two light rings).

Habitats. The new species was collected at elevation 50– 150 m. It inhabits moist places among leaf litter and on stones covered by mosses. 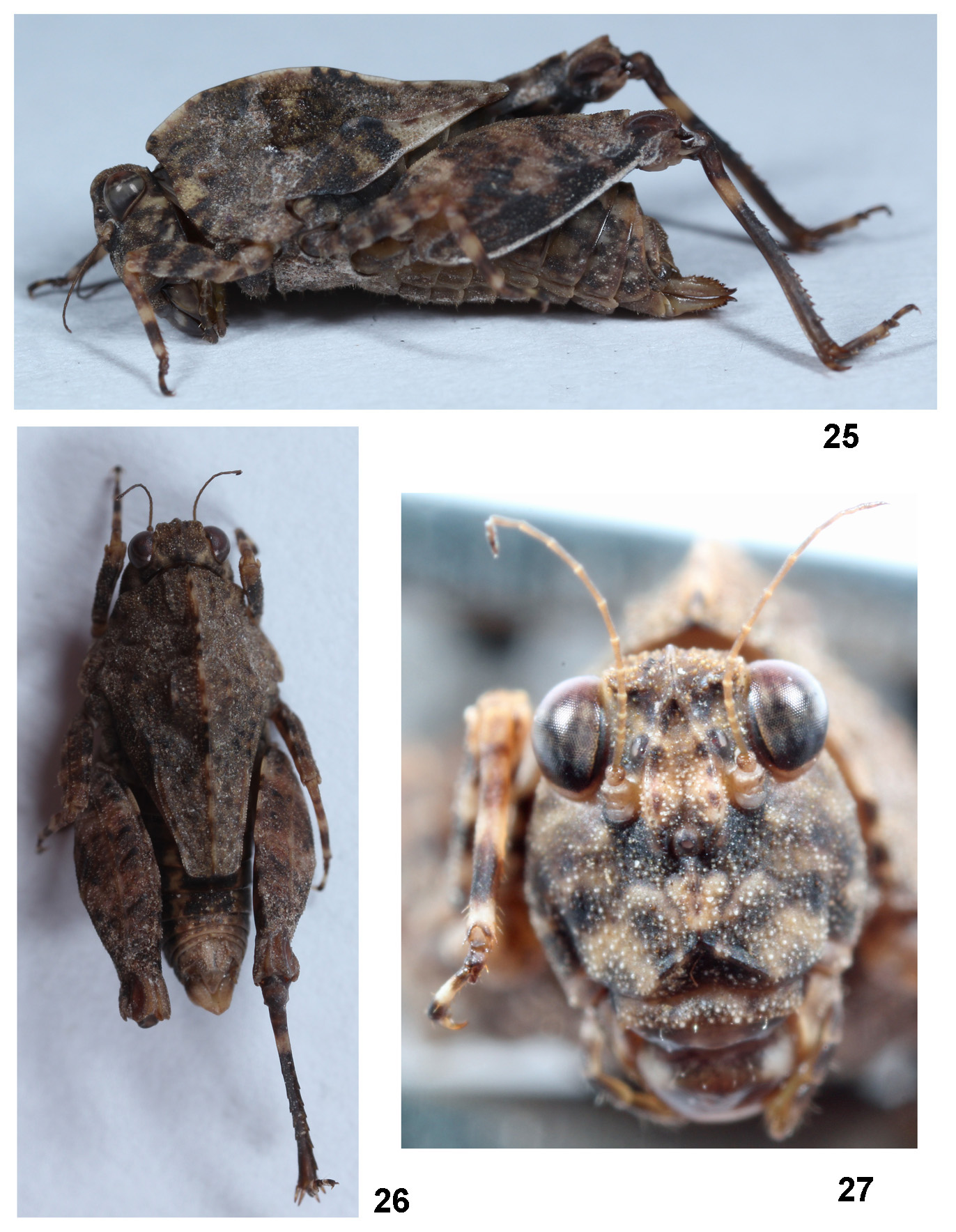