Differential diagnosis. Unmistakable among Gorongosa   katydids, this large, flightless insect can be identified by the combination of its heavily armed, spiny pronotum and head, the lack of visible wings (males’ short yet overlapping tegmina are completely hidden under the pronotum, while those of females are reduced to minute, non-overlapping cuticular folds), and an extremely short ovipositor in the female. E. iaculator   belongs to the petersi   Group of species, as defined by Glenn (1991). From E. petersi ( Schaum, 1853)   , a species described from an unknown location in Mozambique, it differs in the armature of the pronotum, with a significantly shorter, less extended anterior “rack of spines s1 and s2 on the anterior edge of the prozona; shorter spines s8 on the posterior corners of the metazoan; and the shape of the titillator (simple, undivided tip in E. petersi   , divided in E. iaculator   ) ( Figs. 18B, H View FIGURE 18 ). From E. nyala Glenn, 1991   from Malawi it differs in having shorter forward-facing spines s1 of the frontal “rack, spines s6 distinctly longer than s7, and shorter spines s8 on the posterior corners of the metazoan; the structure of the titillator (strongly divided and dilated apically in E. nyala   ) ( Figs. 19C, I View FIGURE 19 ); and the pattern of male song (syllable length in E. nyala   <0.25 s, with 7–8 impulses; syllable length in E. iaculator   ~ 0.4 s, with 11 impulses) ( Figs. 49 View FIGURE 49 I–L). From E. mulanje Glenn, 1991   , a species endemic to the Mulanje Massif in Malawi, it differs in the same aspects of the pronotal armature as mentioned above, the shape of the titillator ( Fig. 19J View FIGURE 19 ), and the pattern of the song (syllable length in E. mulanje   ~ 0.75 s, with 13 impulses).

Males usually start calling shortly after sunset from dense bushes, often very low to the ground (from a few centimeters to about 3 meters above the ground.) While calling, the male invariably hangs upside down on a thin branch and is relatively oblivious to disturbance. Calling males appear to be territorial and are spaced regularly by at least 10 m; the same tree or bush never has more than one calling male.

The population in the northeastern part of the Cheringoma Plateau is unusual in that the males often sing throughout the day, including noontime. This population, however, shows no statistically significant differences from the populations elsewhere in the Gorongosa   region in either the parameters of the call or their morphological characters.

Distribution and natural history. This new species is currently known only from the Gorongosa   region albeit it is likely to occur throughout suitable lowland miombo habitats in the coastal region of central Mozambique between rivers Save and Zambezi. The record of 2 female specimens of E. nyala   from Beira, listed as being in the collection of the Iziko Museum in Cape Town by Glenn (1991) (but currently missing from the museum’s holdings), is highly doubtful and likely represents the new species.

E. iaculator   is found primarily in the understory of Brachystegia   miombo woodland, at elevations between 20 and 250 m. These katydids prefer shaded, dense bushes, where adults hide during the day by clinging to branches. In contrast, nymphs often spend the day under rocks and logs on the ground or in crevices of tree bark. They are primarily predaceous, capable of catching and devouring even relatively very fast prey, such as grasshoppers Zonocerus elegans Thunberg, 1815   . They also eat plant material, such as flowers and fruits.

In addition to the defense provided by the hard and spiny pronotum these katydids respond to threats by squirting a powerful jet of hemolymph from a small opening on the dorsal surface of the connective membrane between the coxa and trochanter of the mesothoracic leg ( Fig. 17D View FIGURE 17 ). The jet is powerful enough to reach the eyes of a person (and presumably other attackers) and it has a strong smell, similar to that produced by some leaf beetles ( Chrysomelidae   ). The actual composition of the liquid and its chemical properties are still unknown, but it presumably contains compounds that predators find distasteful or toxic. In the experience of the authors the katydid hemolymph does not seem to have a discernible effect on the human skin albeit there are anecdotal cases of people having an allergic reaction following a contact with Enyaliopsis   katydids. Strangely, despite having powerful mandibles, these katydids never attempt to bite the attacker.

Both nymphs and adults occur throughout the year, including the dry season, and males call virtually every day of the year. In captivity adults lived for more than two years. Mating takes place on branches and lasts for approximately an hour, during which time the male produces a large spermatophylax, approximately the size of 1/3 of his abdomen ( Fig. 3B View FIGURE 3 ); the female subsequently consumes the spermatophylax. Since the male cerci are non-functional, the male secures his position on the underside of the female by holding her with all his legs ( Fig. 3B View FIGURE 3 ). The male refraction period is unknown but males mate multiple times, most likely throughout the year. Females lay eggs in the soil ( Fig. 4E View FIGURE 4 ) by digging a hole with their short ovipositor and subsequently carefully cover the hole with soil. Eggs laid in captivity underwent a 2-year diapause before hatching. Nymphs of all stages resemble the adults in their general appearance and, unlike other Hetrodinae   whose nymphs are often green, have brown, mottled coloration ( Fig. 5B View FIGURE 5 ).

Etymology. The specific epithet of this species, iaculator   (“shooter in Latin), refers to the defensive behavior of this species, during which the insects spray the attacker with a jet of their own hemolymph. FIGURE 18. Enyaliopsis iaculator sp. n.: A. female, lateral view, B. male. Lateral view; C. male, posterior view showing a droplet of hemolymph; D. a stream of hemolymph being ejected from an opening in the connective membrane between the coxa and trochanter of the mesothoracic leg; E. male abdominal apex, posterior view; F. ovipositor. 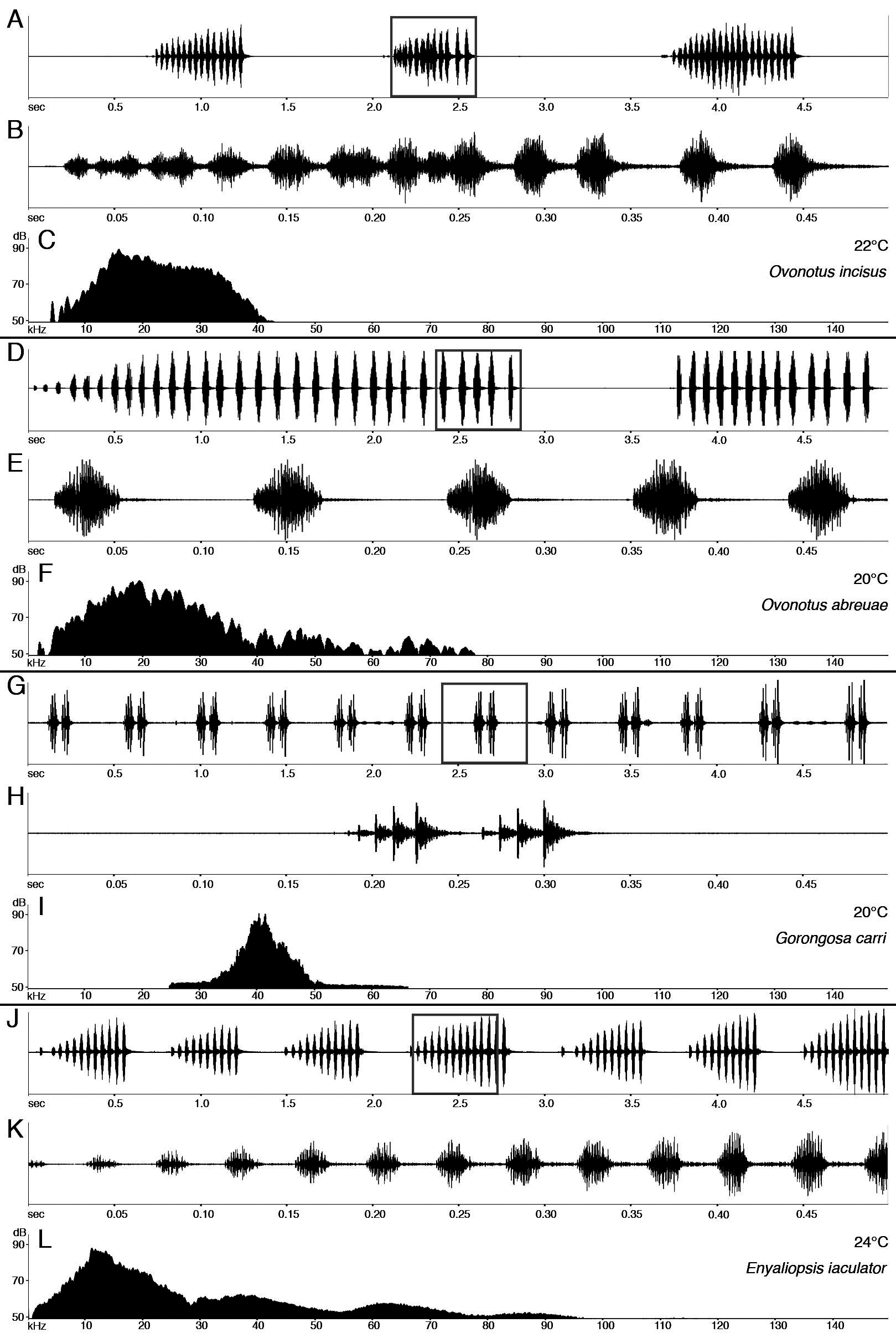