Description. Male. Head ( Fig. 6 View FIGURE 6 B) with ocular tubercle prominent and rounded; compound eye occupying about 60% of its diameter. Asymmterical dorsal organ immediately to its posterior about two-thirds tubercle height and separated from it by about height of dorsal organ. Rostrum triangular and protruding about 1.5× tubercle height, with few growth lines and elongated ocellus at base.

Telson ( Fig. 6 View FIGURE 6 C) with about 22 spines in the posterior rows, with anteriormost spine a little larger than subsequent spines, central spines the shortest and penultimate spines a little longer than central spines. Spines with spinules.Telsonic filaments originating from mound little higher than dorsal floor of telson, positioned near fourth spine. Dorsal floor of telson posterior to mound with steep declivity to slightly convex surface leading to base of cercopod. Cercopods almost as long as dorsum of telson, basal 50% hardly thinning to small spine then rapidly thinning to acute apex. About 12 setae of moderate length (about 1.5× basal cercopod diameter), the first and last tending shorter; all setae 2-segmented, basal segment with fewer setules than distal segment. Distal half of cercopod with unusually large smooth denticles (about one tenth the length of spine separating two halves). Ventroposterior corner of telson rounded, hardly protruding and with few very short setae.

Female. Head ( Fig. 6 View FIGURE 6 D) similar to male, but with less pointed rostrum, though still more prominent than the ocular tubercle. First antennae shorter than peduncle of second antenna and with only 2 or 3 sensory lobes.

Telson ( Fig. 6 View FIGURE 6 E) as in males, though numbers of telsonic spines and cercopod setae ± 1. Telsonic setae inserted at about 5th telsonic spine instead of 4th.

Intraspecific variation. Besides some minor variation (typically ±1) in numbers of telsonic spines and cercopod setae among the Maroubra collections, the Williamtown material (AM P98996 View Materials ) ( Fig. 7 View FIGURE 7 ) exhibits further differences from the neotype. There are only 18 telsonic denticles and the segmental junction spines of the clasper palps are longer, reaching almost to the junction of the second and distal palpomeres.

One specimen from the Maroubra collection had deformed clasper palps ( Fig. 7 View FIGURE 7 F), perhaps due to a developmental error. Failed predation attempts are more likely responsible for the damaged second antenna, cercopods and carapace edges seen on a few individuals.

Comparison with similar species. The distinction between P. s o rd i d a and P. stanleyana   is far more extensive than shown by King (1855) and as discussed earlier. Their eggs are particularly distinctive, as are their cercopod setae; male rostra and the number of telsonic spines are less distinctive. The two species also tend to live in different habitats (see below). Any claim by authors such as Sars (1896) that the two species are synonymous was clearly premature and based no doubt on the original inadequate original description of P. s o rd i d a.

Examination of Sayce’s types of Limnadia victoriensis   ( Fig. 8 View FIGURE 8 ) revealed they have the characteristics of Paralimnadia sordida   . The egg ( Fig. 5 View FIGURE 5 F) is a little different from those from New South Wales. Victorian eggs are spherical with about 60 irregular polygons, but tending elongated, and the combined borders of some are raised into about 20 small diffuse knobs. Polygons are U-shaped in crosssection so that floors tend to be flat though some narrow polygons have steady internal slopes to a weak central groove. The next most distinctive character in Paralimnadia   , the cercopod and its setae ( Fig. 8 View FIGURE 8 C), are almost identical in the New South Wales and Victorian populations: about 11–13 setae with most about 1.5 × the cercopod basal diameter, and significantly, with the first and last setae about half this length. The medial surface of the clasper has a relatively small tumidity distally in both populations, thus separating it from most species of Paralimnadia   ( Fig. 8 View FIGURE 8 D). There are also about 4 or 5 spines, some long (0.5–1.0 × length of next palpomere), at the junction between first and second palpomeres, a character shared with only a few species of Paralimnadia   (e.g., P. ammolophos   n. sp., P. hyposalina   n. sp.); these species, however, differ in other characters (see below). The New South Wales and Victorian populations differ in slightly in rostral development and in telsonic spine numbers ( Fig. 8 View FIGURE 8 B, C), but these features are variable in most species. Thus, L. victoriensis   is concluded to be a junior synonym of P. s o rd i d a.

Sayce (1903) considered P. s o rd i d a (King) to be a junior synonym of Eulimnadia rivolensis Brady, 1866   , but given that King's species has temporal priority, the opposite was probably meant. Certainly the clasper, telsonic and cercopod structures are similar, but E. rivolensis   has a triangle, and occasionally a spine, beneath the cercopod base, consistent with Eulimnadia   , rather than Paralimnadia   . Furthermore the eggs are entirely different in the two species, E. rivolensis   having many spikes ( Fig. 5 View FIGURE 5 L). The status of E. rivolensis   is under review (Timms & Schwentner in prep).

Remarks. King (1855) used just two characters to differentiate P. s o rd i d a from P. stanleyana   , the only two limnadiid species then known from Australia: telson with 19 or 20 spines (as opposed to 15 in P. stanleyana   ) and the large palp of the claspers 3-articulate (as opposed to 2 in P. stanleyana   ). He also wrote that P. so rdi da is larger than P. stanleyana   and implied that there were 17 trunk segments. Neither of these statements is valid; articulation of the palps is not totally reliable (see later) and many Paralimnadia   species have 19 or 20 telsonic spines, so that the species is effectively unrecognisable based on the original description. King (1864) later provided sketches of some limbs of P. s o rd i d a, but these also are not diagnostic. Later authors, Sayce (1903) and Henry (1924) were concerned with other possible species with which P. s o rd i d a was presumably synonymous and not with its basic characters. As a result, the identity of P. s o rd i d a remained tenuous and there are no types. Any recent identifications of P. sordida   (e.g., Weeks et al. 2006) are likely to be erroneous.

In fact, based on sites from which Weeks collected in Western Australia, what he called P. s o rd i d a is likely to be either P. cygnorum   or more likely P. westraliensis   n. sp.

Habitat and distribution. Coastal New South Wales, at least Sydney to Nelson Bay ( Fig. 4 View FIGURE 4 ). Other sites recorded (Lismore, Victoria, South Australia, Central Australia ( Henry 1924); Armadale and Wanarra in Western Australia ( Weeks 2006) are not supported by specimens and are likely to be misidentifications. All known sites are on sandy substrates, generally in coastal sand dunes. The Sydney sites were destroyed long ago as beach precincts such as Maroubra (neotype locality) were developed and made into landscaped parks. The Botany swamps were either drained or permanently flooded. Only the Williamtown dunes remain untamed and only occasionally they expose the water table to provide temporary habitats. The author has visited these many times over the last few decades and found shrimp only twice.

The only recorded site in Victoria is a swamp at Elwood on Port Philip Bay. This has long been destroyed by urbanisation, but significantly, this site was near the coast and sandy. 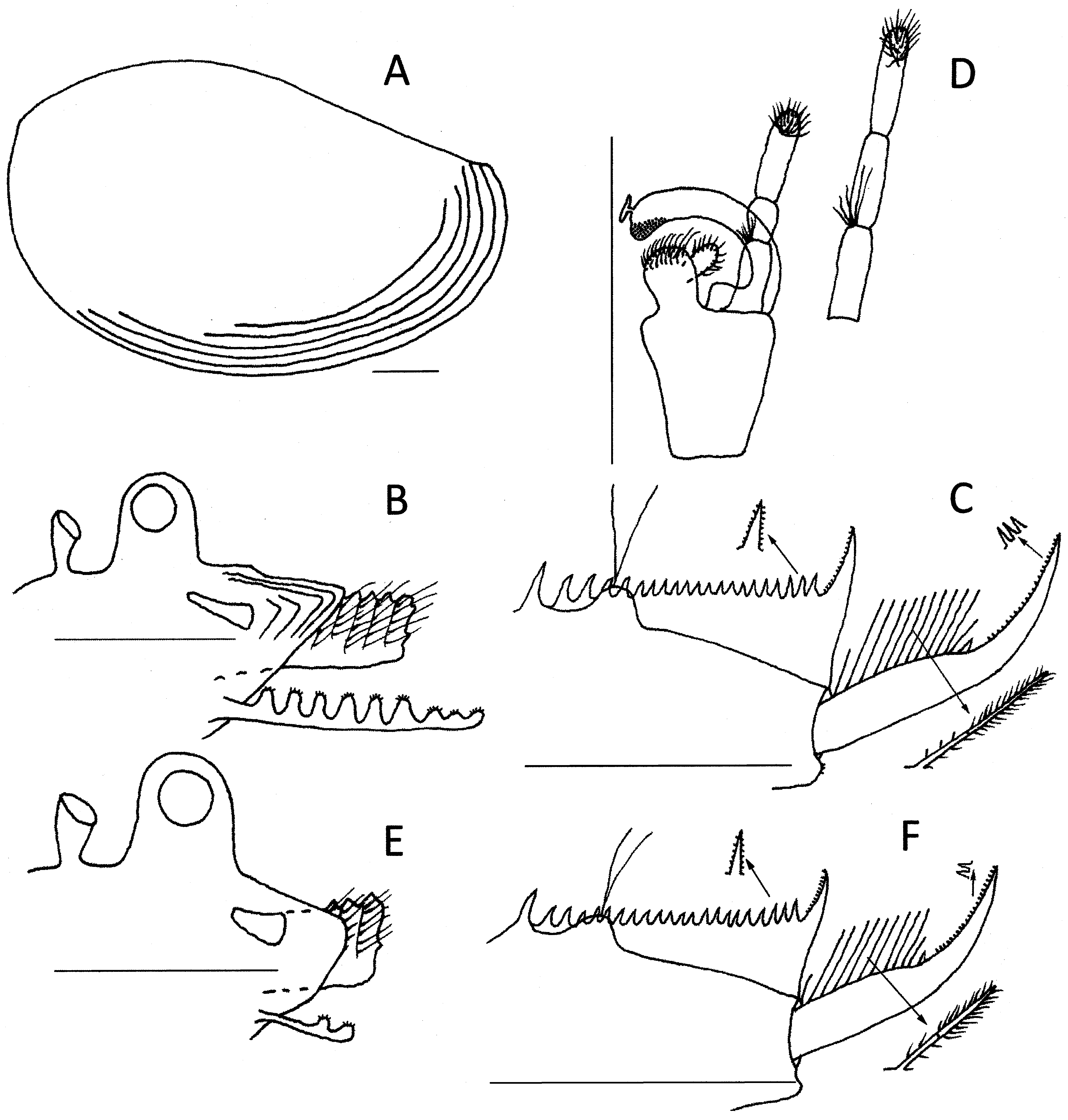