This species is represented by some postcranials and toothrows, and a cranium GoogleMaps   Ma2-Gips15, virtually complete and undistorted, which is, together with the specimen from Akkaşdağı ( ANTOINE & SARAÇ 2005) one of the best known specimens of this species, and the most valuable fossil of the SMNK collection from Mahmutgazi ( Fig. 4 A View Fig. 4 ; comparative measurements: Table 5). The species is relatively wellknown, and a detailed description of the cranium would be useless; I shall focus on the most significant points.

The cranium carried two horns, a large nasal ones, and a smaller, but distinct frontal one. Behind it, the dorsal profile is straight as far as the level of the middle of the temporal fossa, where it curves upwards towards the nuchal crest. Although well indicated, this concavity, in this undistorted skull, is much shallower than in the skull MTLA-5 from Samos ( GIAOURTSAKIS 2009, pl. 1, fig. 1). This strongly suggests that distortion in this Samos skull was stronger than assumed by GIAOURTSAKIS (2009), as also indicated by the relatively short distance between the occipital condyles and M3, and the upward tilt of the zygomatic arch. In this relatively straight dorsal profile, Ma2-Gips15 resembles modern C. simum   , the African ‘white’ rhinoceros. The nuchal crest has a large flange-like caudal expansion, with a central notch; it largely overhangs the condyles, and is almost as broad as the ventral part of the occipital; the occipital surface is slightly inclined dorsocaudally, thus intermediate between the average conditions of C. simum   and Diceros bicornis   , the ‘black’ rhinoceros. The basioccipital and basisphenoid form a marked angle, a clear difference with C. simum   , in which they are almost in line, in correlation with the much lengthened skull of the end members of the Ceratotherium   lineage.

The rarely preserved premaxillae are complete; as usual in the Dicerotini   , they bear no incisor, although small cavi- ties may be the alveoli of vestigial ones. The bottom of the nasal notch is above the limit P2/P3, the infra-orbital foramen is above P4, the front of the orbit above the middle of M2; these positions are similar to those observed in other C. neumayri   ( GERAADS 2005, fig.6). As in modern African rhinos, the lachrymal tubercle and supra-orbital process tend to fuse into an orbital rim, there is no post-orbital process, and the ventral orbital border is rounded.

The DP1 is shed, and the other cheek-teeth are wellworn. They are virtually identical with those of D. bicornis   , a morphology that, in my opinion, confirms the hypothesis that C. neumayri   is an acceptable ancestor for both D. bicornis   and C. simum   , although the latter has a much derived tooth morphology.

Ma2-Gips16 GoogleMaps   ( Fig. 4 C View Fig. 4 ) is a maxilla with nasal notch and infra-orbital foramen slightly more posterior than in the skull, but again within the range of C. neumayri   . The teeth are slightly less worn, but display the same characters, being very similar to those of D. bicornis   . Their measurements are also similar to those of Ma2-Gips15 (occlusal length P 2- P 4 = 121; occlusal length M 1- M 3 = 145). There is no tooth an- terior to P2, meaning that DP1 was shed, and not replaced; it seems that this is the rule in D. bicornis   , although a true P 1 may sometimes show up (MNHN-1961-195). The premolars have small cristae, as sometimes occurs in D. bicornis   .

Ma3-Gips1 GoogleMaps   is a nice deciduous upper tooth-series, very similar to those figured by GERAADS (1988, 1994) and GI- AOURTSAKIS (2009). Its size ( L DP 1- DP 4 = 151 mm) is within the range of Pikermi ( GERAADS 1988), main Samos assemblage ( GIAOURTSAKIS 2009), and slightly above that of the two specimens from Kemiklitepe A ( GERAADS 1994). There are several lower deciduous series. They are comparable in size to those from MTLA ( GIAOURTSAKIS 2009) but the talonid basin of dp2 is never fully closed, and the anterior lobe of dp3 is at most incipient; it may be that the intra-specific variability of these teeth is greater than assumed by GIAOURT- SAKIS (2009).

It is more parsimonious to assume that post-cranials also belong to C. neumayri   ; indeed, they display some of the features regarded as characteristic of this taxon by GERAADS (1988) and GIAOURTSAKIS (2009).

There are several sets of associated metacarpals GoogleMaps   ( Fig. 4 D View Fig. 4 ). The McII has no palmar ridge and a long articular sur- face for the magnum, and the McIII has a deep lateral concavity to accommodate a strong tuberosity of the Mc IV (see also GIAOURTSAKIS 2009, pl. 5, figs. 4-6). The three McIIIs are homogeneous in size ( Table 6), and are slightly shorter than a specimen from Lubéron ( MNHN), but slightly longer than a McIII from Garkın in Munich (1968-VI- 359) and lon- ger than KTD-6 from the lower level of Kemiklitepe (GER- AADS 1994). Although not too much weight should be placed upon these measurements, the metric evidence is consistent with a slight increase in metapodial length from KTD and Garkın to Mahmutgazi and to Lubéron. Ma2-Gips15 GoogleMaps   ( Fig. 4 B View Fig. 4 ) is an astragalus showing the typical features of the species ( GIAOURTSAKIS 2009): oval sustentacular facet separated from the distal calcanear facet, lateral fibular facet tapering proximally, not contacting the sustentacular facet. Ma2- Gips28 GoogleMaps   is an incomplete astragalus that differs in having a round sustentacular facet, and in being lower, but it may have suffered some distortion; I do not regard this single specimen as positive evidence of another species.

Thus, Ceratotherium neumayri   is the only species definitely represented in the SMNK collection. HEISSIG (1975) mentioned Chilotherium schlosseri   , but I have not seen a single specimen that could be assigned to Chilotherium   . 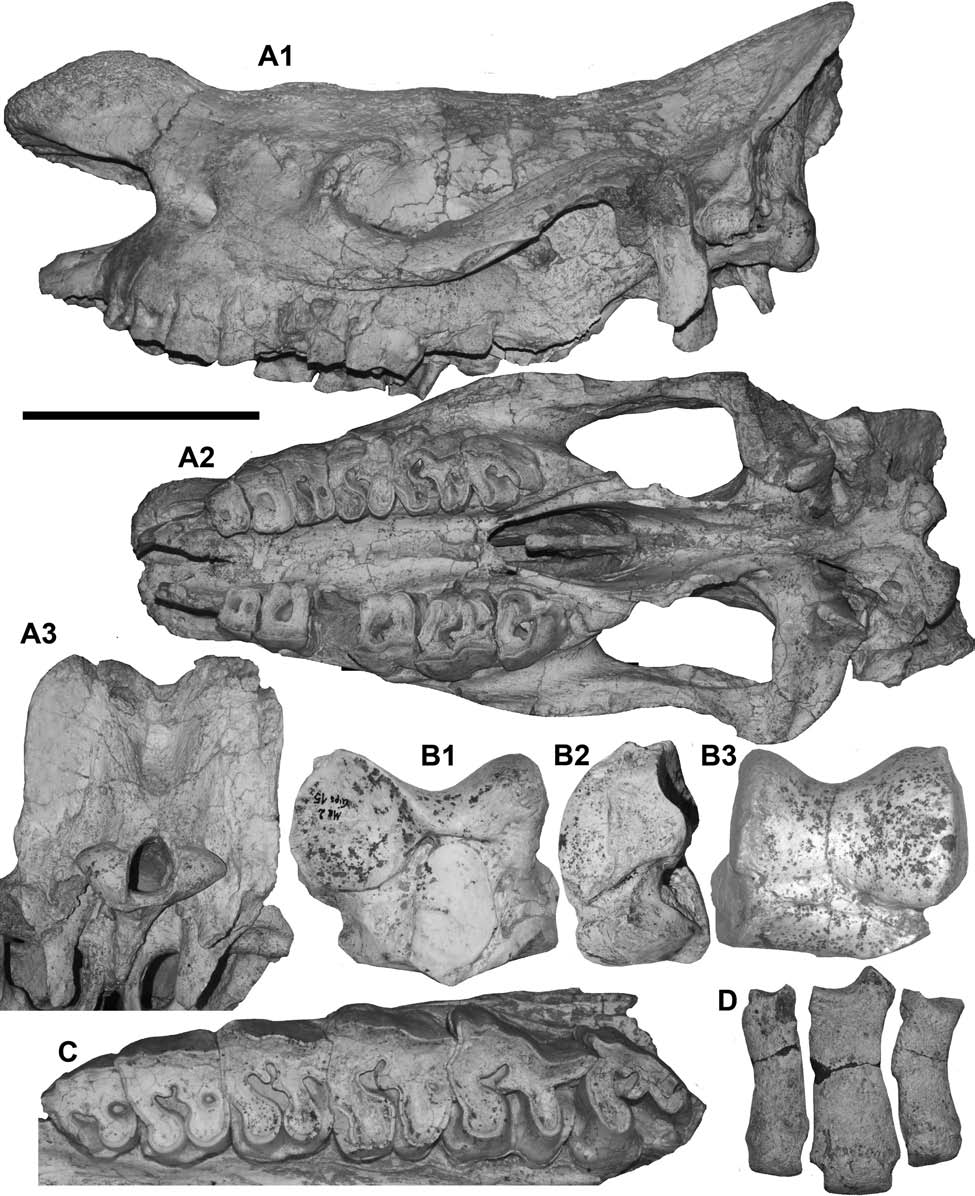