Description and comparisons: This taxon is represented by a number of postcranials and several dental remains. The size range of the DP3s is perhaps greater than expected in a single species but all other remains, including the postcranials, are of homogeneous dimensions, and it is more parsimonious to assume that a single species is present.

Ma2-Gips29 GoogleMaps   ( Fig. 1 B View Fig. 1 ) is the only adult maxilla. The teeth are imperfectly preserved, but only slightly worn, preserving prominent styles and pillars. The premolars are rather large but P4 remains much narrower than M1; they bear strong spurs in the central valley, as may happen in Samotherium   ( BOHLIN 1926, pl. 5, fig. 10).

The best specimen is a partial mandible from Ma3 GoogleMaps   with the left i2 -c and p2-m3; unfortunately part of the diastema is missing, so that its length is unknown ( Fig. 1 A View Fig. 1 ). As in other Samotherium   , the two lobes of the canine are much less clearly distinct than in Giraffa   , and this tooth is not much larger than the incisors. The front teeth show no evidence of the interstitial wear that is observed in some other late Miocene large giraffids of the Aegean region, such as Helladotherium   from Hadjidimovo, Bulgaria ( GERAADS et al. 2005), Samotherium major   from Vathylakkos, Greece ( GERAADS 1974; MERCERON et al. in press), or S. neumayri   from Maragha, Iran ( RODLER & WEITHOFER 1890, p1. 4, figs. 2-3). This peculiar wear, which is certainly linked with their use as a comb when browsing, is also variably present in Giraffa camelopardalis   . The premolars are strongly molarized: p2 has a long entocristid; p3 is similar to p 4 in having a long metaconid connected to the paraconid, but not to the transverse cristid, and blocking the entrance to the mesosinusid; the ectoflexid of p4 is deep, as in other Giraffidae   , but the heavy wear has connected the hypoconid to the rest of the tooth. These premolars are also quite short, with a Pm/M index of 58.6 ( Table 1). These short, molarized premolars suffice to identify the Mahmutgazi large giraffid as Samotherium   . In the large Helladotherium   , a genus common in Aegean sites of similar age, the premolars are significantly larger, and p3 always retains a primitive morphology. Most representatives of the species S. boissieri   from Samos also retain this primitive morphology ( BOHLIN 1926, figs. 141-146; KOSTOPOULOS 2009a, fig. 8), but S. neumayri   from Maragha and S. major   from Vathylakkos and Samos ( BOHLIN 1926; GERAADS 1974; KOSTOPOULOS 2009a) have a fully molarized p3. The shortening of the premolars also fits better S. major   (Pm/ M index = 53.8-66.2, mean = 59.5, N = 6) than S. boissieri   (Pm/ M index = 60.7-65.6, mean = 63, N = 5) (meas- urements from GERAADS 1974; KOSTOPOULOS 2009a, table 8). However, the absolute size of the teeth ( Table 1) is lower than in S. major   , and closer to S. boissieri   .

The postcranial sample is large. There are no less than nine distal humeri GoogleMaps   , five of them from the right side, providing a Minimum Number of Individuals of five for the whole collection. It is likely that all these postcranials are indeed from a limited number of individuals, but they cannot be matched, because a single plaster jacket may have contained bones of more than one individuals ( Ma2-Gips20 GoogleMaps   has two right metacarpals).

The dimensions of the distal humeri ( Table 2) are homogeneous, but there is no complete bone ( Fig. 1 E View Fig. 1 ). The available sample of measurements from nearby sites is small; these humeri are clearly larger than those of S. boissieri   from Samos (dist. TD = 98-106 according to KOSTOPOULOS [2009a]), but smaller than those of its likely descendant S. major   from the same area (dist. TD = 132-148). The Mahmutgazi humeri also compare well with the forms from the two levels of Kemiklitepe ( KTD, lower, and KTA, upper: GERAADS 1994), and with S. neumayri   from Maragha.

There are only four astragali GoogleMaps   , two of them well preserved ( Fig. 1 J View Fig. 1 ). One is similar in size to those from KTD, and the other to those from KTA ( GERAADS 1994), but they also fit S. neumayri   from Maragha (pers. data). It is remarkable that, while the size distinction between the two levels of the nearby site of Kemiklitepe is clear, the size of the Mahmutgazi material overlaps both of them ( Fig. 3 View Fig. 3 ), but the difference in size between the two well-preserved specimens does not exceed what is found in a single population.

A number of other bones ( carpals, tarsals, calcanei, phalanges GoogleMaps   ) obviously belong to the same species; the first phalanges are short and stout, as in Samotherium   ( GERAADS 1974); the cubo-navicular has no posterior articular facet for the metatarsal ( Fig. 1 I View Fig. 1 ), as in other Samotherium   , but in contrast to Helladotherium   , in which it is present ( GERAADS 1974; KOSTOPOULOS 2009a).

Discussion: All postcranials can easily be assigned to Samotherium major   , and the derived lower premolars fit this identification, but the lower teeth from Ma3 are smaller than in this species. If indeed Ma3 is contemporaneous with Ma1 and Ma2, these teeth may be from a small individual of S. major   . In terms of biochronology, S. major   clearly allies Ma1 and Ma2 with the upper part of the Samos sequence ( KOSTOPOULOS 2009a, fig. 21). 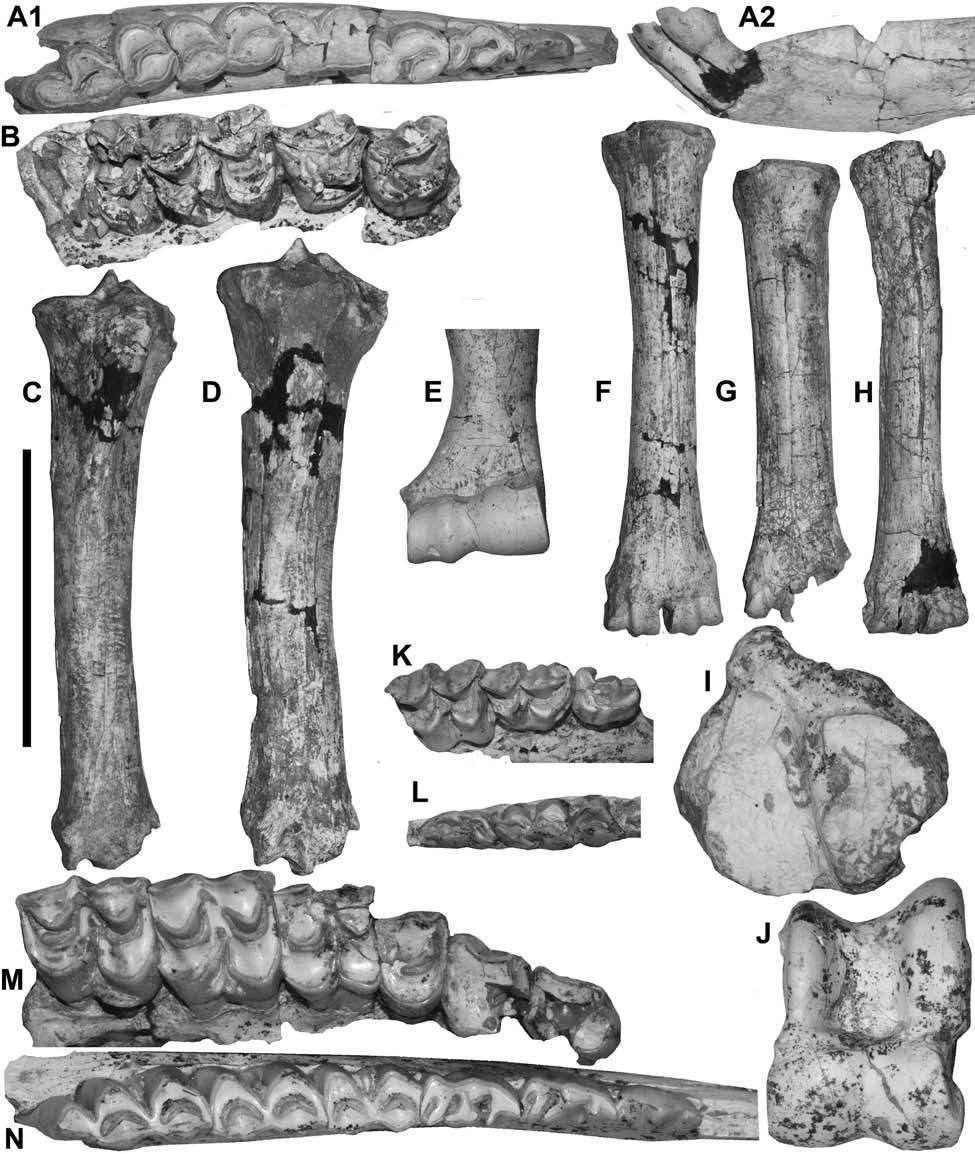 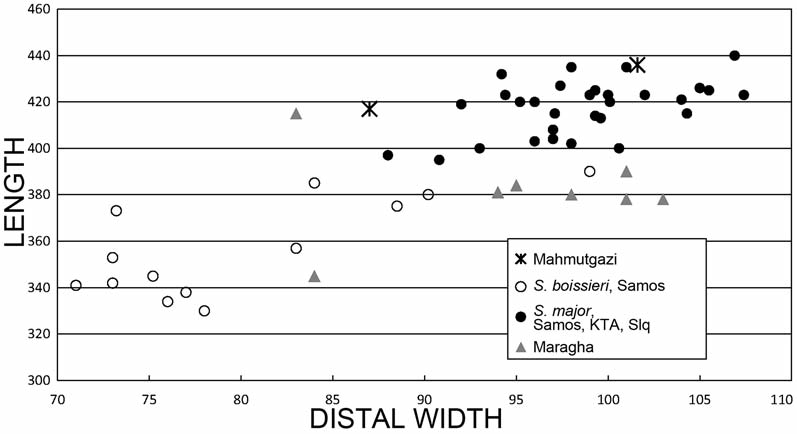 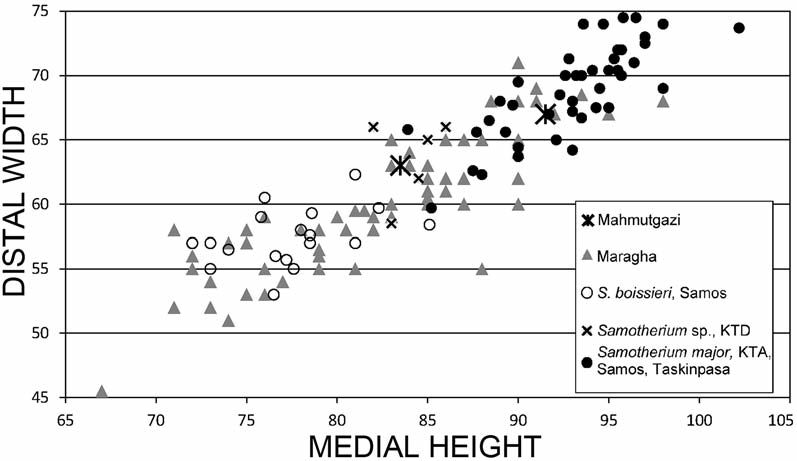 Fig. 3. Plot of medial length vs. distal width of late Miocene giraffid astragali. Note that ‘Maragha’ includes both S. neumayri and Palaeotragus coelophrys. Data from KOSTOPOULOS (2009a), and original measurements.