Diagnosis. This species differs from the following species by the shape of the lateral pronotal teeth, the reticulate punctation on the pronotal disk and the explanate lateral margins of the elytra being narrowed towards the humeri, the longer and narrower 5th tarsomere and the femoral line curved posteriorly at the level of the metacoxal process.

Head ( Figs 1 View FIGURE 1 A,B, 2A, 3). Subquadrate, maximum width across eyes 0.48–0.54 mm (n=4); clypeal margin slightly reflexed; genal region prominent (front of eye) laterally but not exceeding eye in width. Eye small, strongly protruding, as long as combined lengths of antennomeres 3 and 4. Punctation coarse and strong on posterior half; ventral surface with sparser punctation than dorsum. Pubescence inconspicuous; dorsally composed of very short and thick setae; ventrally composed of finer setae. Labrum ( Fig. 3 View FIGURE 3 A) oblong, ventrally with many setae along anterior margin, dorsally with some long setae and a few short setae. Antenna ( Fig. 2 View FIGURE 2 A) 0.56–0.60 mm long (n=4), relatively thick; antennomere 10 about twice as long as 9; covered with fine and relatively short setae; approximate ratios of antennomere lengths of holotype as follows: 2.0: 1.5: 1.4: 1.3: 1.2: 1.1: 1.3: 1.3: 1.3: 2.5: 1.0. Mandible ( Figs 3 View FIGURE 3 B,C) densely, finely pubescent on about anterior 1/4 and posterior 2/5 of inner margin, dorsally with long oblique furrow on distal half; lateral region ventrally with one long and a few short setae at each anterolateral angle and a few short setae; mola widely extended posteriorly, with some teeth, with dense pubescence on posterior half of inner margin; outer posterior angles strongly extended laterally. Maxilla ( Fig. 3 View FIGURE 3 D) with lacinia and galea; lacinia with two long apical teeth, dorsally with some long setae in a longitudinal row along inner margin; galea broad, divided into basigalea and distigalea, distigalea with dense long setae along anterior and inner margins, with a long seta on anterior outer margin, connected to basigalea by a membrane; palpifer with some short to medium length setae; palpomere 1 small, curved outwards; palpomere 2 strongly widening distally, covered with setae of various length except on inner area; palpomere 3 cylindrical, gradually widening distally, covered with setae of various length except on inner area; palpomere 4 long and conical, relatively densely covered with short spines on apex, sparsely covered with setae of various length, with a large puncture around apex; stipes protruding posteriorly at basal angle, ventrally with a very long seta and a few long setae. Labium ( Fig. 3 View FIGURE 3 E) dorsally covered with many setae of various lengths, ventrally with paired long and a few short setae, with two paired punctures around palpomeres, with some medium length setae along anterior margin; palpomere 1 small and stout, incised at middle of outer portion, with a puncture; palpomere 2 widening anteriorly, sparsely covered with short setae except on inner area; palpomere 3 conical, longer than 2, with some short setae, with many minute spines along distal margin.

Etymology. The specific name means “reticulate”. The punctation on the pronotal disc of this new species is reticulate.

Remarks. The internal spherical space in the base of the mandible was observed under a compound microscope. It appears to be a mycangium, but it is difficult to regard it as such, since the opening of the structure could not be observed. 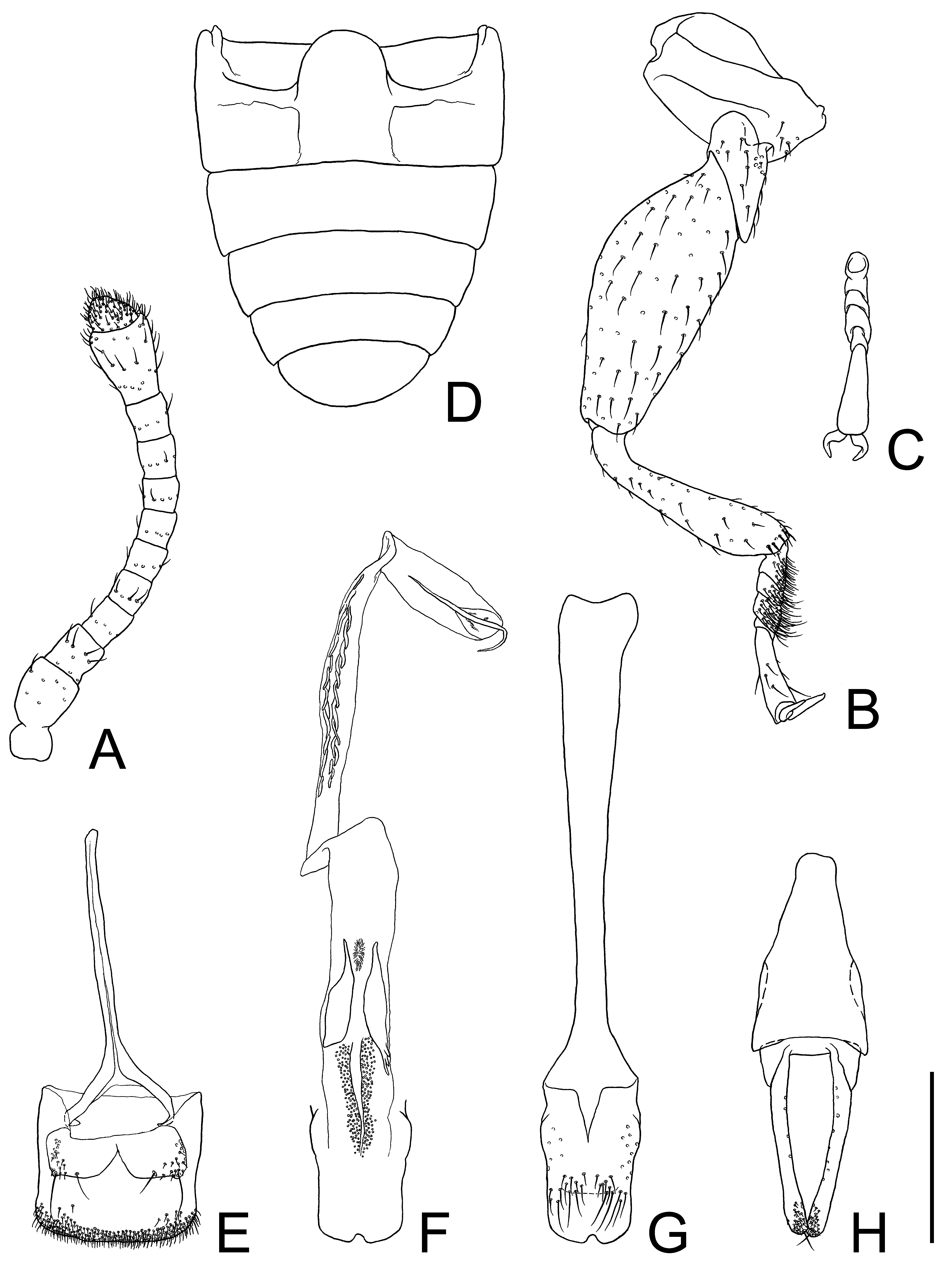 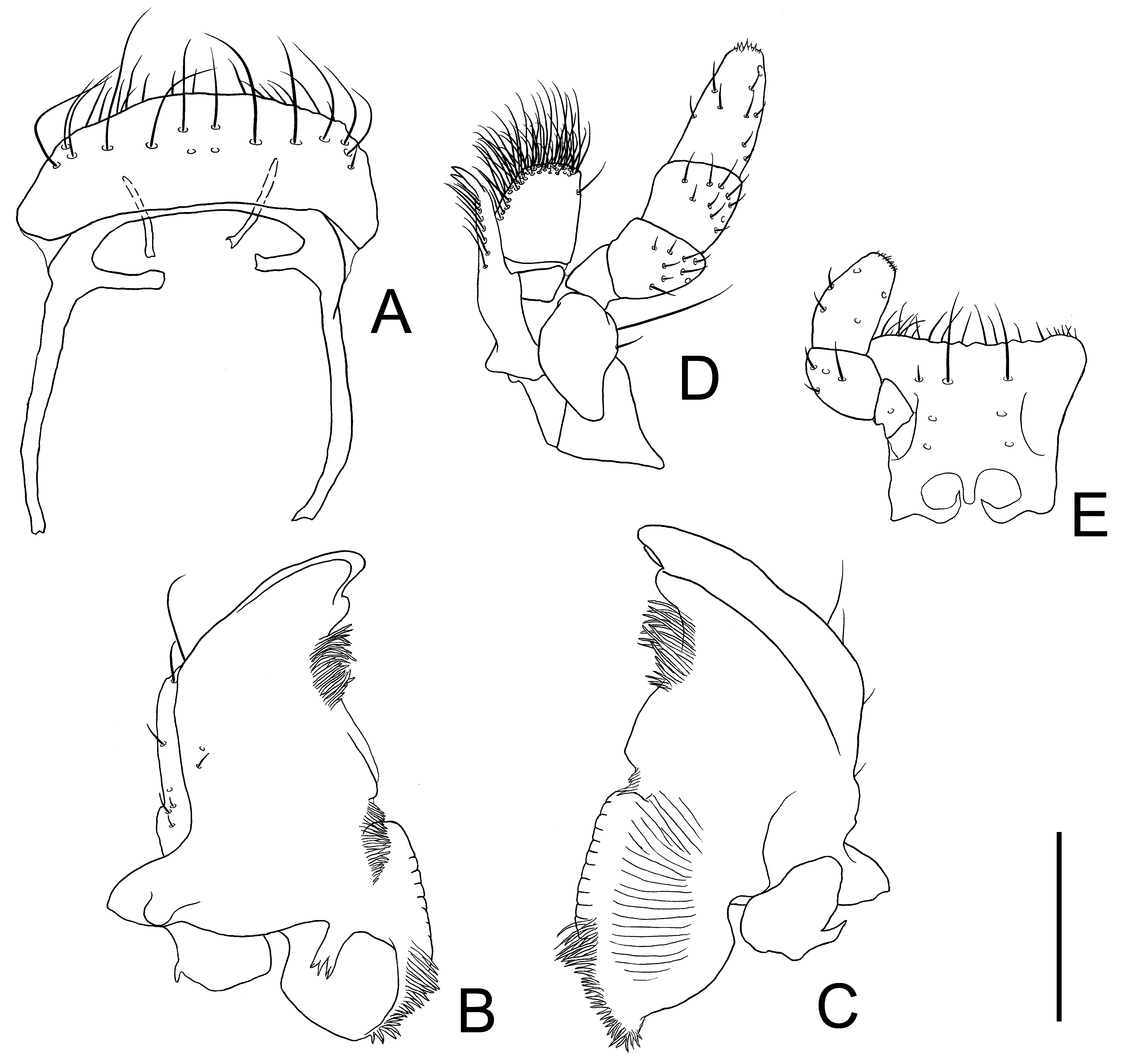