Diagnosis. Cyrtodactylus hidupselamanya  sp. nov. can be differentiated from all other species of Cyrtodactylus  by having the combination of the following characters: maximum SVL of approximately 199 mm; 8–12 supralabials; 9–12 infralabials; weak tuberculation on body; no tubercles on ventral surface of forelimbs, gular region, in ventrolateral body folds, or anterior one-third of tail; 39–48 paravertebral tubercles; 19–23 longitudinal tubercle rows; 26–33 ventral scales; 19–24 subdigital lamellae on fourth toe; no femoral pores; 17–22 precloacal pores; deep precloacal groove in males; four dark dorsal body bands; body bands as wide or slightly wider than interspaces; no rostral chevron; body bands and nuchal loop edged with a thin white, tubercle bearing lines; no scattered white tubercles on dorsum; no banding on base of thigh; 8–10 dark caudal bands on original tail; white caudal bands generally immaculate; and hatchlings and juveniles bearing white tail tips. These characters are scored across all species of the C. pulchellus  complex in Table 5.

Variation ( Figs. 3View FIGURE 3, 4View FIGURE 4). The paratypes are remarkably similar to the holotype in overall coloration and pattern, likely due to substrate matching. The posterior section of the tail in the hatchling ( LSUHC 12177) and the juvenile ( LSUHC 12176) is whitish with faint bands—a condition found in the vast majority of cave-adapted Cyrtodactylus  throughout Southeast Asia and all other limestone ecosystem adapted species in the C. pulchellus  complex (Grismer et al. 2012, 2014a). However, unlike all other of the latter, the white coloration remains into adulthood when unstressed ( Fig. 4View FIGURE 4). Like other species in the C. pulchellus  complex, hatchlings of C. hidupselamanya  sp. nov. bear bright-yellow dorsal interspaces ( Fig. 3View FIGURE 3) that fade to brown in adulthood. Meristic and additional color pattern differences are listed in Table 6.

Distribution. Cyrtodactylus hidupselamanya  sp. nov is known only from the type locality at Felda Chiku 7, Kelantan, Peninsular Malaysia ( Fig. 1View FIGURE 1). Another karst formation approximately 1 km to the south was not surveyed. There are other isolated karst formations 5–10 km away that were also not surveyed.

Etymology. The specific epithet hidupselamanya  is a modification of the Malay words “ hidup selamanya ” which, loosely translated means “live forever” and is in reference this species precarious future being that its limestone habitat is targeted to be completely quarried.

Natural history. All specimens of Cyrtodactylus hidupselamanya  sp. nov. were collected at night between 2000 and 2400 hrs inside a complex network of caves and caverns permeating and coursing through an isolated karst formation ( Fig. 5View FIGURE 5). A very narrow swath of undisturbed limestone forest closely surrounds the karst formation but the forest for several kilometers beyond this has been cleared for oil palm plantations ( Fig. 5View FIGURE 5). Some lizards were collected in open areas on the limestone walls near cavern entrances while others were found on walls much deeper within the cave systems. All specimens were found between 1–4 m above the cave floor. One specimen observed during the day at 1730 hrs inside the cave was taking refuge deep within a crack approximately 25 m from the cave entrance. It is likely that C. hidupselamanya  sp. nov. ventures outside the caves at night to forage on the exterior walls of the karst formation although none were found. One juvenile ( LSUHC 12176), however, was found on the limestone vegetation next to an exterior wall. Of the four adult females sampled ( LSUHC 12159, 12162, 12173 – 74), none were gravid although one hatchling was collected ( LSUHC 12177). This would suggest that C. hidupselamanya  sp. nov. does not breed year-round and that April is at the end of its reproductive season.

Lizards were quite common, generally unwary of our approach, and usually did not try to escape capture. We also noted that only two of 14 specimens (14 %) collected had regenerated tails. This would suggest that predation within the cave systems is not high. This is in contrast to other karst ecosystem species that utilize the surrounding limestone vegetation such C. gunungsenyumensis  and C. metropolis  . Both species are far less numerous, extremely wary and difficult to catch, and have a high frequency of regenerated tails—nearly 100 % in the former ( Grismer et al. 2014 c; 2016 a).

Comparisons. Cyrtodactylus hidupselamanya  sp. nov. is differentiated from all other species of the C. pulchellus  complex being that it is the only species with the exception of C. jelawangensis  in which the posterior caudal region is whitish in adults. It is further differentiated from all other species by having a combination of weak tuberculation on body; no tubercles on the ventral surfaces of the forelimbs, on the gular region, or in the ventrolateral body folds; 19–23 longitudinal rows of dorsal tubercles; 39–48 paravertebral tubercles; 26–33 ventral scales; 19–24 subdigital lamellae on the fourth toes; no femoral pores but 17–22 precloacal pores; a deep precloacal groove; four body bands; body bands as wide or slightly wider than interspaces; body bands and nuchal loop edged with a thin white line bearing tubercles; no scattered white tubercles on the dorsum; 8–10 dark caudal bands on the original tail separated by immaculate (posteriorly) white caudal bands ( Table 5). Within the C. pulchellus  complex, C. hidupselamanya  sp. nov. is the sister species of C. jelawangensis  but separated from it on the basis of having low and rounded as opposed to prominent tubercles; lacking as opposed to having tubercles on the ventral surfaces of the forelimbs; and having fewer rows of longitudinal dorsal tubercles (19–23 versus 23–25) ( Table 5).

Remarks. The karst formation in which Cyrtodactylus hidupselamanya  sp. nov. occurs is scheduled to be completely quarried for its limestone and other raw materials by ASN Cement Sdn Bhd. From what we currently know about this species, this will result in its extinction. FIGURE 1. Distribution of the species of the Cyrtodactylus pulchellus complex from the Thai-Malay Peninsula. Enclosed stars represent type localities of the newly described species. 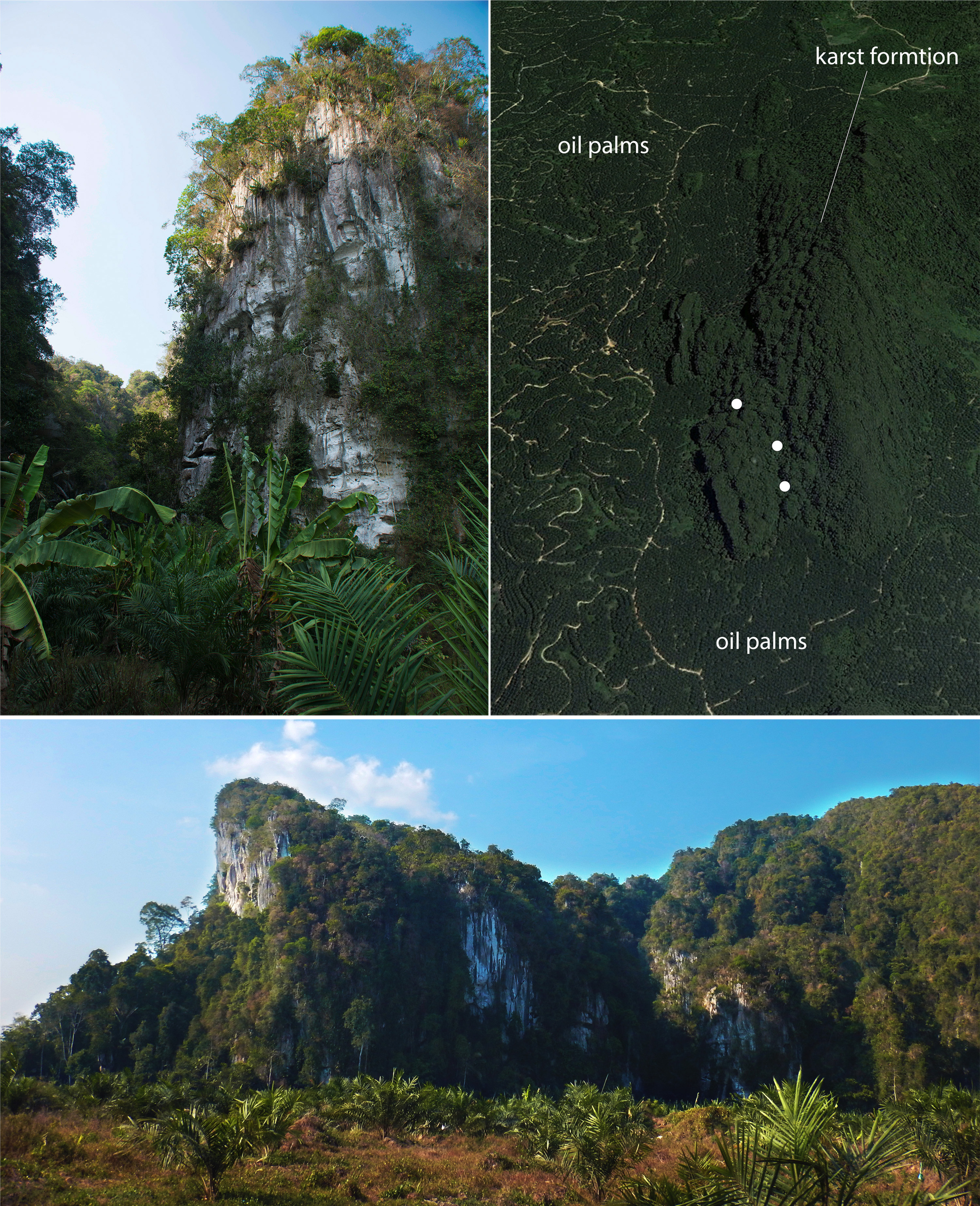