Snout rounded from margin of upper lip to vertical through anterior nostrils. Head small. Mouth terminal, mouth slit nearly at horizontal through middle of eye. Maxilla long and slightly curved, aligned at angle of approximately 45º to longitudinal body axis, and its posterior tip extending below orbit, reaching nearly to vertical through center of eye.

Remarks of Hemibrycon polyodon   . Günther (1864) described Tetragonopterus polyodon   based on a single specimen from Guayaquil, Ecuador. Eigenmann (1927: 409-410) in his revision of the genus, assigned the distribution of H. polyodon   as “Coastal streams of Ecuador ”, also stated that “It is more than probable that the types were shipped from Guayaquil but were collected at a considerable elevation in the interior of Ecuador or Peru ”.

Recently, Román-Valencia et al. (2007) redescribed H. polyodon   based in the digital image of holotype and some additional specimens from Santiago and Morona River basins. They furnished an insufficient diagnose for the recognition of the species, and the characters described in their diagnosis

[“ aleta dorsal con radios simples y ramificados de igual longitud, una mancha humeral estrecha y verticalmente alargada que alcanza una horizontal trazada desde el borde inferiror del opérculo ”] were not found in our analysis of the holotype and non-type specimens of H. polyodon   . Also, the authors commented that the supraorbital bone is found in this species, as well as other Hemibrycon species   , but this bone is absent in all species of Hemibrycon   we have examined (see discussion in Bertaco et al., 2007).

Remarks of Hemibrycon coxeyi   . The holotype of Hemibrycon coxeyi   is badly preserved, lacking several body scales, with dorsal fin and snout broken, and body completely discolored. Only some measurements were taken, as fins length (except dorsal fin), body and caudal peduncle depth, and caudal peduncle length.All scales and fin ray counts were taken, except for the count of anal-fin scale sheath. Fowler (1943: 2) described H. coxeyi   based on one of three specimens collected by Mr. W. Judson Coxey in 1931 in Ecuador. The author provided the exact locality according to Coxey trip: “All these specimens are from the basin of the Río Pastaza, in Tungurahua, where he spent some time on the river at the Hacienda Las Mascota”. Fowler recognized that H. coxeyi   was nearly related to H. polyodon   from the Pacific slope of Ecuador, but he was unable to identify the new species as H. polyodon   based on Günther’s description. Böhlke (1958: 24-25) doubted the type locality of H. coxeyi   reported by Fowler (“Hacienda Las Mascota, mouth of the Rio Pastaza, basin of the Rio Maranon, Ecuador ”) and in footnote cited a reference to the location: “Annals Entomol. Soc. America, vol. 34, no. 4, Dec. 1941, p. 848”. According to Böhlke, this reference places Hacienda Las Mascota at a point far removed from mouth of the Pastaza (01º25’S 78º11’W), a station occupied on several occasions for some length of time by Coxey.The exact location of mouth of the río Pastaza is about 04º52’S 76º21’W according to Böhlke and current maps. Latter, Géry (1962: 66) discussing about the distribution of the known forms of Hemibrycon   , commented that H. coxeyi   is probably a synonym of H. huambonicus   , and H. polyodon   comes very probably from the same area of these species.According to Lima et al. (2003) the type locality should be amended to “ Ecuador, Napo-Pastaza, Hacienda Mascota, río Topo, a tributary of río Pastaza, 01º25’S 78º11’W. The type localities of H. polyodon   and H. coxeyi   were inexact, but can be in some place of río Pastaza drainage, a relatively large tributary to the left margin of río Marañon, upper río Amazonas basin, in Ecuador.

A comparison of the holotypes of H. polyodon   and H. coxeyi   , and new specimens from río Pastaza drainage failed to reveal any differences in examined meristic and morphometric features or other characters. Hemibrycon coxeyi   is, therefore, considered a junior synonym of H. polyodon   , an action previously suggested by Géry (1962).

Remarks of Hemibrycon pautensis Román-Valencia   , Ruiz- C. & Barriga, 2006. Hemibrycon pautensis   was described by Román-Valencia et al. (2006) based on specimens collected in río Paute, a tributary of the río Santiago drainage, río Marañon drainage, Ecuador. The río Santiago is nearly located to río Pastaza, both affluents of left margin of río Marañon drainage, in Peru and Ecuador, where also occurs Hemibrycon polyodon   . In the original description, one of the characters presented in the diagnosis, the presence of six to seven branched dorsal-fin rays in H. pautensis   was not found in the species of Hemibrycon   analyzed in this study, as well as in any other Stevardiinae   (sensu Mirande, 2009, 2010). Another character used by those authors in the diagnosis of the species, the number of branched anal fin rays (27-28), can be easily found in several species of the genus that were not compared in the diagnosis of their new species. Moreover, the authors presented different values along the text and table for counts of branched rays of anal-fin (27-28 and 25-28) and dorsal-fin (7-8 and 8-9), and number of maxillary teeth (7-11 and 9-11) for that species, respectively. Furthermore, the authors referred to the presence of a supraorbital bone in H. pautensis   , and other Hemibrycon species   , but this bone is absent in all species of Hemibrycon   examined (Bertaco et al., 2007). 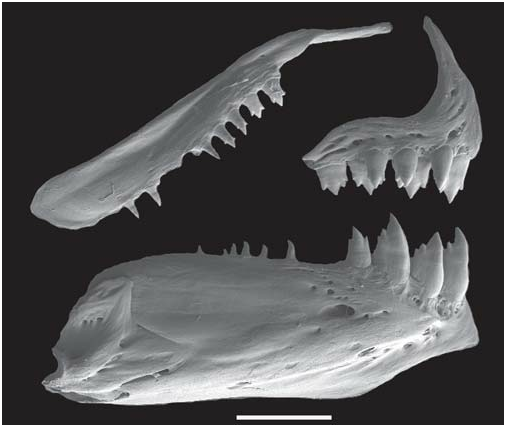