The name Coccus hesperidum   was first introduced by Linnaeus in Linnaeus (1746) and, although he never described this insect, the name was validated by the references to descriptions that he quoted in Linnaeus (1758). Of these references, Fn. svec   . ( Linnaeus, 1746) adds nothing further to its identity, and the reference to Act. paris. (q.v.) shows a scale insect with many eggs. This description cannot refer to C. hesperidum   , an ovoviviparous species, as we know it today. The citations of Frisch. ins. and particularly of Reaum. ins. would qualify to validate the name C. hesperidum   .

This species is almost cosmopolitan and is often a pest on greenhouse plants. De Lotto (1959), Gill et al. (1977) and Hodgson (1994) provide full descriptions and the accompanying figure is reproduced from Hodgson (1994) with permission from the author and CABI Publishing. Linnaeus’ species is widely recognised and identified from these publications. For a full synonymy of the species see Ben-Dov (1993).

The name Coccus hesperidum   with the Name Number 2939 was designated type species of the genus Coccus   under the plenary powers of the International Commission on Zoological Nomenclature by Melville (1985).

I have described the species that most authors regard as Kermes ilicis   but when Linnaeus named it as Coccus ilicis   it seems clear that he was meaning the species that produces the red dye and known since ancient times as Coccus   baphica. Linnaeus (1758) cited references to Garidel (Garid. aixens.), Geoffroy (Geoffr. mat.), and Réaumur (Reaum. ins.), and added Ledermüller (Lederm. mat.) in his later edition ( Linnaeus, 1767), all of whom gave accounts of the species that produces the red dye in Provence, France. Linnaeus also indicated that the host plant was Q uercus coccifera   . All the authors that Linnaeus quoted discussed the host plant as either Ilex coccus   glandulifera, Ilex coccifera   , or Ilex aculeata   . These are earlier names for Quercus coccifera   as shown by Linnaeus (1753) in his Species Plantarum, the starting point of botanical nomenclature. By then, Linnaeus had listed Quercus ilex   and Quercus coccifera   as separate species. Furthermore, there is no evidence that Linnaeus named Coccus ilicis   after Quercus ilex   . He could have named it after Ilex   , the name used for some species of oaks by the earlier authors. There was no reason, therefore, why Planchon (1864) should describe the dye-producing species as Chermes vermilio   [= Kermes vermilio (Planchon)   ] when it could have remained as Coccus ilicis   . The only doubt about Linnaeus’ choice of name could be the reference to Garidel, who discussed a species producing red eggs and another producing white eggs, both species illus- trated in his work cited by Linnaeus (1758) as plates 53 and 2. Plate 2 in Garidel (q.v.) follows immediately after plate 53. This was probably the only reason why Planchon described Chermes vermilio   and added as a synonym Coccus ilicis   L. (pro parte)— Chermes ilicis   auct. (pro parte). It would have been easier for Planchon to have accepted Coccus ilicis   as the dye-producing species and to name the species producing whitish eggs (as described by Garidel) as a different species which he did under the name Chermes bauhini Planchon   [= Kermes bauhini (Planchon)   ]. All later authors, Blanchard (1883) and Cardon (1990, 2003) have accepted the name Kermes vermilio   as the species producing the red dye. The name Chermes bauhini   has long since been synonymised with K. ilicis   but is, nevertheless, available. Balachowsky (1950), Borchsenius (1960) and other authors who have discussed the morphology, have also accepted K. vermilio   as the dye-producing species living on Quercus coccifera   , and Kermes ilicis   living on Quercus ilex   , even though Linnaeus indicated that the host plant for Kermes ilicis   was Quercus coccifera   . Both scale insect species are specific to their respective species of oaks even when the trees are adjacent ( Cardon, 1990).

A single mature pinned specimen labelled “ilicis” in Linnaeus’ handwriting, is present in Linnaeus’ collection ( Figure 1J) and this was listed by Jackson (1913a) as no. 6 under Coccus   . It would normally be easy to ascertain the identity of this specimen but at present I have thought it prudent not to mount it on a microscope slide because, perhaps, little would be gained from a study of such a mature specimen. There has been no modern revision of most European species of Kermes   based on adult females taken immediately after the final moult. When such a study is imminent, it might be a good time to examine this specimen further and to decide on its true identity.

For full synonymy, host plant range, and distribution of Kermes ilicis   , see Miller et al. (2005). The accompanying figure of the first-instar nymph of this species is taken from Borchsenius (1960) but it has been reversed to show the dorsum on the left.

Linnaeus (1767) gave a good description of this species, sent to him from The Cape of Good Hope, South Africa, on Myrica quercifolia   . This plant is now known as Morella quercifolia   and is, apparently, the only species in the genus. Specimens fitting Linnaeus’ description are not apparent in his collection and the species has not been identified since in South Africa.

Walker (1852) included the species in Lecanium   , and later, Targioni Tozzetti (1866, 1868) listed it under his genus Columnea   . Signoret (1872) transferred the species to Ceroplastes   as C. myricae   (L.) where it has remained subsequently in catalogues, even though it is still regarded as unrecognisable. Although Brain (1920) acknowledged that it had not been found again in South Africa since it was described, Jan Giliomee, University of Stellenbosch, South Africa, has informed me that specimens have now been found on Morella quercifolia   which might agree with Linnaeus’ description, and work is now in progress to describe the specimens. Although this species has remained unrecognisable, it is remarkable how Cockerell (1893) recorded it from Jamaica, and Green (1900) discussed it as occurring in Assam and Calcutta in India!

This species is not represented in Linnaeus’ scale insect collection. Linnaeus listed it as living on Crataegus oxyacantha   and the name was made valid by his reference to two figures by Réaumur (1740) showing good illustrations of an unmistakeable species typical of Pulvinaria   and later known as P. oxyacanthae   (L.). Using host-transference methods, it has been shown by Malumphy (1991) and Łagowska (1996) that the species is nothing more than P. vitis   (L.), thus verifying an earlier synonymy by Newstead (1903).

For some reason, Fabricius (1775) listed Coccus crataegi   with the same reference to Linnaeus (1767) and with the same information supplied by Linnaeus for Coccus oxyacanthae   . The name C. crataegi Fabricius   is an unjustifiable replacement name for C. oxyacanthae   and the name C. crataegi Fabricius   falls as another synonym of Pulvinaria vitis   (L.). Fernald (1903) even credited the authorship of C. crataegi   to Linnaeus, as did Ben-Dov (1993), but Linnaeus never mentioned this combination. The error may be a misinterpretation of Linnaeus’ short description of the habit immediately after his listing of the name C. oxyacanthae   with the words “ C. Crataegi   Oxyacanthae” which means “ Coccus   of Crataegus oxyacantha   ”, exactly the same earlier Latin description in Linnaeus (1758). 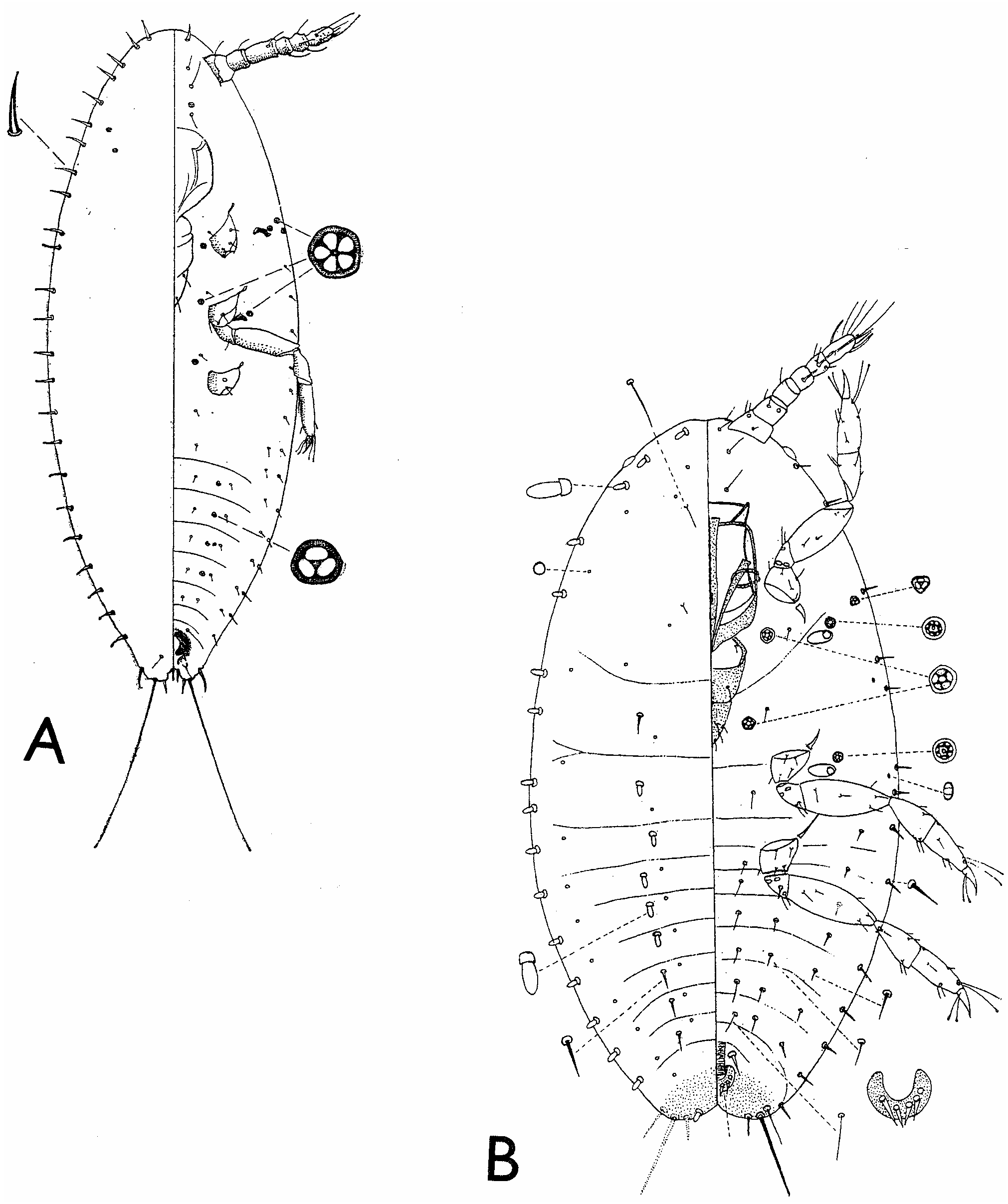