Affinities. The genus Taphiassa appears to be the sister-lineage to Olgania from Tasmania ( Fig. 4 View Figure 4 ).

Nomenclatural remarks. The genus Taphiassa was originally described by Simon (1880) for the species T. impressa , from Nouméa, New Caledonia. No illustrations were provided with the original description, and the species had never been adequately illustrated ( Brignoli 1980). Levi and Levi (1962) transferred T. impressa from the Theridiidae to the Symphytognathidae , while Forster and Platnick (1977) transferred it from the Symphytognathidae to the Mysmenidae . It was Brignoli (1980) who, with remarkable insight aided only be Simon’s original Latin description, first noted the similarity of T. impressa to Parapua , and the analysis of Rix et al. (2008) also inferred a close sister-group relationship between Taphiassa and Parapua . Taphiassa is hereby transferred from the Mysmenidae to the Micropholcommatidae , and Taphiassa is formally recognised as a senior generic synonym of Parapua .

Taxonomic remarks. Species of Taphiassa can be arbitrarily divided into two groups based upon somatic features – the ‘ Taphiassa group’ and the ‘ Parapua group’. Species in the ‘ Parapua group’ (including T. punctata , T. castanea and similar species) are generally smaller, darker coloured, with relatively shorter legs and smaller female pedipalps than species in the ‘ Taphiassa group’, which are often relatively large with strongly patterned abdomens. A spectrum of intermediate morphologies exists, however, and the division seems merely phenetic. Many additional species of Taphiassa are known from Australia and New Caledonia (e.g. see Platnick 1993 under “ Parapua ”), and the genus has clearly radiated in New Caledonia, with at least five undescribed species represented in museum collections (M. Rix, unpubl. data). 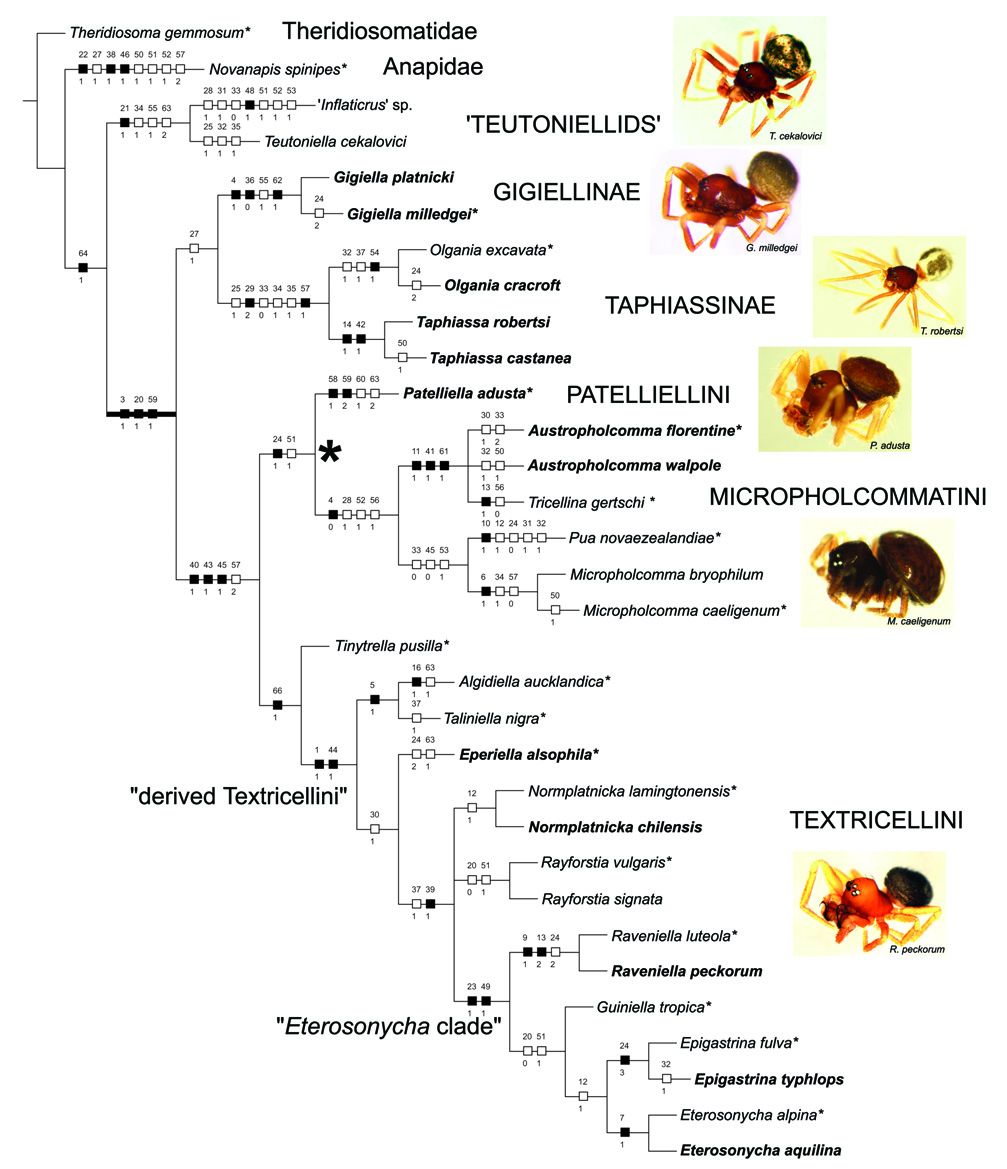 Figure 4. Optimal cladogram for the Micropholcommatidae under equal and implied weights, and one of six equally parsimonious trees recovered from an equal weights analysis of the ‘new’ matrix (length = 135; see Appendix II). With the exception of the highlighted (*) node ‘Patelliella adusta + Micropholcommatini’, all clades shown were recovered in all iterations of an implied weights analysis (K=1–6); the phylogenetic position of P. adusta changed to ‘P. adusta + Textricellini’ under K-values 1–5. Unambiguous character optimisations are shown for each node, and bold species are newly described, with generic type species highlighted (*).