Taxonomy. Noctilio hipposideros   Borkhausen, 1797, “ Lebt mit der vorhergehenden an gleichen Orten, oft in ihrer Gesellschaft, begattet sich aber nicht mit ihr [= Lives with previous [species] at the same places, often together, but they do not pair] and “An mehreren Orten in Deutschland, z. B. in Thüringen, Hessen [= At several places in Germany, for example in Thuringia, Hesse].”

Rhinolophus hipposideros   is the sole member of the hipposideros   species group. The phylogenetic relationships of R. hipposideros   are still uncertain, but it seems to belong in the Asiatic clade of Rhinolophus   (probably close to the trifoliatus   and pearsonii   species groups), unlike its European congeners, which are in the Afro-Palearctic clade. There are two karyotype forms in Europe and a third in the Middle East. These karyotypic forms do not fit the current model of subspecific distribution for R. hipposideros   and do not exactly match with currently known genetic lineages within the species. A recent phylogenetic study by S. Shahabi and colleagues, in 2019, found a number of divergent clades across the species’ distribution, and cranial morphometries in the same study showed that there are at least two well-distinguishable morphotypes from south and north-western Iran. There appear to be a few major lineages: (1) Central and West Europe and North Africa; (2) South-east Europe and West Asia; (3) North-west Iran to Azerbaijan; (4) North Iran (based on a single specimen); and (5) South and Central-west Iran; a specimen from Tajikistan also appears to form a separate clade, sister to the European and West Asian clades. A revision using substantial morphological, genetic, and karyological data from across the species’ distribution is needed to clarify subspecific distributions, which at present do not reflect karyotypic and genetic data divisions. Six subspecies tentatively recognized.

Descriptive notes. Head-body 35- 5-48 mm, tail 21-32 mm, ear 12-19 mm, hindfoot 6-7- 9 mm, forearm 35-42- 5 mm; weight 4-7- 9 g. Dorsal pelage is light to dark, buffy to gray brown (base of hairs drab), whereas ventral pelage is drab to grayish drab. Ears are small. Noseleaf has long, narrow, cuneate lancet with bluntly pointed tip; connecting process is low and rounded or sometimes very bluntly pointed; sella is long and narrow, with convergent lateral margins and pointed tip that projects downward and forward; horseshoe nearly covers muzzle, is 5-7- 3 mm wide, and has rudimentary lateral leaflets. Lower lip has one mental groove. Baculum is very large for body size; ventral emargination is deeper than dorsal, and always simple; dorsal emargination is not as deep and may have many lobes; broad groove is present on ventral surface of basal cone, and bordered by knob-like protuberances; median and distal portions are bent upward, and tip has a button-like knob. Skull is very delicately built (zygomatic width is very slightly greater than, or subequal to, mastoid width); braincase is relatively narrow; zygomatic arch is unusually shaped for the genus, being very weak and slender, and the anterior one-half runs nearly parallel to the tooth row; rostrum is relatively low; anterior median swellings are moderately inflated; posterior swellings are well developed; sagittal crest is moderately developed but flattened posteriorly; frontal depression is shallow; supraorbital crests are weak. C1 is delicate and moderately long; P2 is proportionally larger than in any other member of the genus, and within the tooth row; P3 is minute and extruded from the tooth row; P, and P4 are either touching or have a small gap between them. Chromosomal complement has 2n = 54 and FNa = 62 ( Spain and Germany), 2n = 56 and FNa = 62 ( Czech Republic, Slovakia, Italy, Greece, Turkey, and Azerbaijan), or 2n = 58 ( Turkey, Syria, and Jordan).

Habitat. The Lesser Horseshoe Bat is the most northerly distributed species of horseshoe bat, occurring up to 52° N. It can be found mainly in broadleaf deciduous woodlands along with other open woodland, parkland, farmland, pasture, and scrub habitats in northern portions of its distribution. In southern portions, it can be found in riparian areas, Mediterranean and sub-Mediterranean shrublands, grasslands, thorn scrub, and bushy forests near streams. Recorded from sea level up to over 2100 m, appearing to be more commonly found at higher elevations.

Food and Feeding. Lesser Horseshoe Bats forage mainly by slow hawking but are also known to glean insects off stones, rocks, and vegetation. They typically feed on volant insects, but when gleaning prey, they often pick up non-volant prey including larvae. These bats are often observed flying low and close to vegetation, water, or walls. They are slow but maneuverable fliers that are capable of short bursts of speed and are almost butterfly-like, when flying, because of their fluttering appearance. They are also able to hover for short periods. Throughout Europe, their diet largely consists of small Lepidoptera   and Diptera   (particularly Nematocera) with smaller amounts of Neuroptera, Trichoptera, Coleoptera, and Araneae   , although their diet shifts throughout the year and by region, based on prey availability. Most diet analyses throughout the distribution are dominated by Lepidoptera   and Diptera   . In Slovakia, fecal analysis showed that they fed mostly on small Lepidoptera   (87% by volume) supplemented by nematoceran (10%) and brachyceran (1-2%) Diptera   and Neuroptera (1-5%). A similar composition was reported from fecal samples in Algeria, where diet consisted ofDiptera (41-6% by volume; Culicidae   , Chironomidae   or Ceratopogonidae   , and Tipulidae   ), Lepidoptera   (21-1%), Hemiptera (11-7%), and some minor orders, with insects making up 93-5% of their diet. In Azerbaijan, diet consisted mainly of Tipulidae   , Lepidoptera, Heteroptera, and Neuroptera   ; and Lepidoptera   comprised the most important food in Turkey. On the Sinai Peninsula, Egypt, this species was observed feeding on Formicidae, Homoptera   , and Culicidae   , and a few fecal samples from Jordan included mostly Homoptera. Diet during the winter in the UK and Ireland consisted mainly of Tipulidae   , Sphaeroceridae   , and Mycetophilidae   in Diptera   , and varied in composition across the islands, probably as a result of local habitat differences.

Breeding. Lesser Horseshoe Bats exhibit restricted seasonal monoestry in which mating typically occurs in autumn (September-November) in Europe, or in the hibernacula during winter. Mating starts with chasing, until the female lands and the male hangs behind and over the female; copulation is brief. Sperm is stored in the female’s reproductive tract until March-April when ovulation and fertilization take place. In Europe, births occur in summer, from midJune to early July, and females generally give birth to a single young; however, in Iran, 35% offemales gave birth to twins, which is rare in Europe. After birth, the young grow quickly and linearly for the first 14 days, and in some cases, a loss in weight is observed during days 15-20, which is correlated with when the young first take flight at 18-20 days. Weaning takes place after c.4-5 weeks and young reach sexual maturity in their first year. However, most females do not give birth for the first time until their second year. The oldest recorded individual was 21 years and three months old.

Activity patterns. The Lesser Horseshoe Bat spends the night foraging and the day roosting in underground spaces, such as caves, tunnels, and mines throughout its southern European, Asiatic, and African distribution, but can typically be found roosting in attics and buildings in the northern portions ofits range in summer. During winter, it can be found hibernating mainly in underground sites including cellars, small caves, and burrows. During summer, it will regularly enter a torpid state throughout the day while roosting to conserve energy. While torpid or hibernating, a bat wraps itself in the wing membranes and bends its legs to get close to the substrate in which it is roosting. Bats seem to choose cool areas for hibernating, and have been reported roosting in hibernacula that are 6—9°C with high humidity in Europe, and in similar conditions in Algeria. They leave their roosts around dusk to forage. On an island in the Chiemsee in Upper Bavaria, Germany, six radio-tracked females foraged for 229 minutes/night, primarily in woodland areas and sometimes in orchards and tree rows but never over water. Echolocation call shape is FM/CF/FM with a greater bandwidth on the terminal FM component, although they emit some F and CF/FM calls while foraging by slow hawking. Females emit higher frequency pulses than males, with males having calls 4 kHz lower than females on average in Ireland;juveniles emit lower frequencies than adults. In Greece, peak F were reported averaging 110-6 kHz, with an average duration of 45-3 milliseconds and an average interpulse interval of 98-2 milliseconds. Similar results were reported throughout Europe ( France, Switzerland, and UK), with an average peak frequency of 109-6 kHz and average duration of 42-5 milliseconds. Calls from Morocco had an average frequency of 116-9 kHz with a duration averaging 39-7 kHz and, in another study, frequencies of 111-5-117-5 kHz were reported. In Israel, peak frequencies were recorded at 103-5-109-3 kHz (mean 107-6 kHz), with a duration averaging 42-3 milliseconds; in Iran, peak frequencies were 109-111-1 kHz (mean 110-3 kHz), with durations of47-8-52 milliseconds (mean 49-9 milliseconds) and an interpluse intervals of 36-1-48-7 milliseconds (mean 41-9 milliseconds).

Movements, Home range and Social organization. Lesser Horseshoe Bats roost either singly or in colonies, generally hanging apart (25-50 cm) from one another, when roosting in colonies. During winter in Europe, they can be found roosting in hibernacula colonies with up to 500 bats, or singly; in summer, females form maternity colonies of 10-1500 individuals, while males roost separately. Maternity colonies consist almost exclusively of females and their young, although some juvenile males may remain in the colonies. Females usually hang separately in maternity colonies, although they will huddle together when heavily pregnant, in cool weather, or when huddling with their young. They are largely sedentary, and both summer roosts and hibernacula are usually within a 5—10 km area. The longest recorded distance for a Lesser Horseshoe Bat migrating for a roost was 152 km. On an island in Lake Chiemsee in Upper Bavaria, six radio-tracked females had home range sizes of 6-8-62-7 ha (mean 25-3 ha) and were active in a central area of 2-8-8-2 ha (mean 5-3 ha). Most of the females stayed on the island to forage, but two of them left (a 1-2-km flight over water) to forage at night in August, after their young had become volant The density of the bats on the island in woodland habitats was calculated at 0-7 ind/ha.

Status and Conservation. Classified as Least Concern on The IUCNRed List. The Lesser Horseshoe Bat is generally widespread and common throughout much of its range, but is threatened locally in several regions. IUCN ed List regionally classifies the Lesser Horseshoe Bat as Near Threatened in Europe and the Mediterranean. In Europe, there has been substantial reduction in the northern portion of the range over the last 50 years. The northern border of the distribution has moved since the 1950s, and the species has become extinct in the Netherlands, most of Belgium, and western Germany. This decline continues but has probably decelerated, justifying the Near Threatened status. Distribution has become fragmented in Switzerland and Austria, with colonies remaining only at elevations over 400 m. In Switzerland however, the population has shown signs of a slow recovery, with an increase from 2200 to 2500 adults counted in maternity colonies in the past ten years. The species is generally threatened by roost disturbance and the destruction of underground roosts or attics, but can also be affected by agricultural expansion and intensification, habitat fragmentation, and the use of pesticides in agricultural areas. This is exemplified in Spain by the disappearance of some colonies due to the restoration of old buildings, which often destroys attic roosts. The species is common throughout much of its range in North Africa and West Asia, although it is fairly rare in Central and South Asia, as well as northern East Africa, where it is known from few records. It is protected by national legislation across Europe, and there are international legal obligations for protection through the Bonn Convention (EUROBATS) and Bern Convention. The species is included in Annex II (and IV) of EU Habitats and Species Directive, which requires Special Areas for Conservation for the species. Recommended conservation measures include protecting maternity roosting sites, hibernacula, and foraging habitat; these have been variably implemented in Europe. There are no conservation measures currently being implemented throughout the non-European range. Locally in Spain, incentives have been provided to encourage people to keep colonies living in their houses, which may be a good potential method for securing roosting spots for the species. 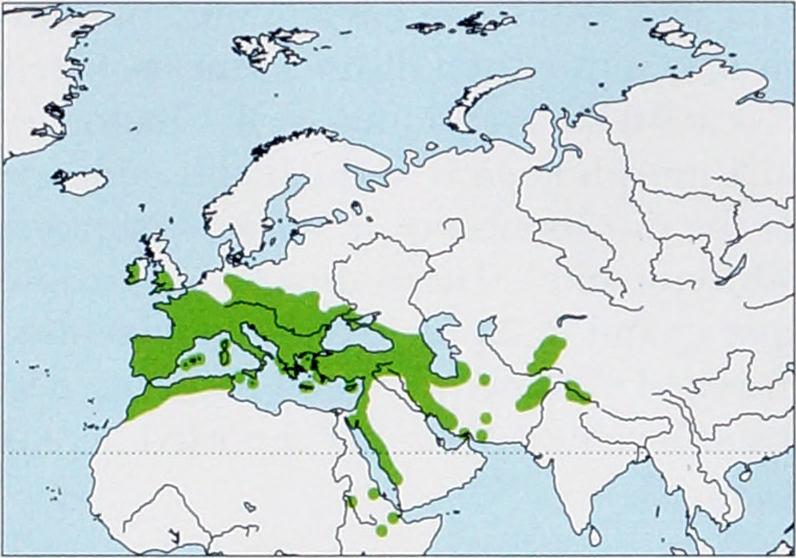