Holotype: a parthenogenetic female, together with an infective female and a male, on a slide deposited in the ANIC, Canberra, ACT, Australia, collected at Murrurundi, NSW, data as above.

Diagnosis and relationships. Fergusobia colbrani   n. sp. is morphologically characterized by the combination of a small C-shaped parthenogenetic female with a short broadly conoid tail, an arcuate infective female with an almost hemispherical tail tip, and an arcuate to barely J-shaped male with an angular spicule having a notched tip and mid-length leptoderan bursa. Its species status is supported by its development in an unusual spheroid leaf gall found only on host plants of the genus Angophora   , and its association with a fergusoninid fly larva having a dorsal shield of the two ‘patches’ form.

In having spicules with a notched tip, the male of F. colbrani   n. sp. is separated from all other described fergusobiid males, in which the tip is not notched. The notch is apparently an indent in the cuticle at the point where the channel between the spicules, for passage of the sperm, opens. In addition, the spicule of F. colbrani   n. sp. appears to be more heavily sclerotised than in the other species of Fergusobia   collected from Angophora   .

Form of gall. Warty, spongy, spheroid galls on leaf blades (collected from Murrurundi district, NSW, Australia) ( Fig. 7 View FIGURE 7 F; and see Fig. 3 View FIGURE 3 in Colbran (1964) for a similar gall form), protruding from only one surface of leaf. About 0.5 to 1 cm in diameter. Lack a clear epidermal covering, contain 1 to 3 locules.

Form of gall. ‘Leafy’ leaf bud galls (collected from Murrurundi district, NSW, Australia). Similar to, but smaller than, those described from E. viminalis   and E. bridgesiana ( Taylor et al. 2005)   ; about 0.5 cm in diameter. Galls form within 2 or more fused leaf blades, bounded by developing leaves of the bud which usually grow past the galled tissue. Multilocular.

Form of gall. Multilocular axillary vegetative bud ‘stem’ galls (various collections from Breeza, Wiseman’s Ferry and Murrurundi districts, NSW, Australia) ( Fig. 7 View FIGURE 7 B–E). Typically rounded to elliptical, with irregular shape and diameter 0.5 –2.0 cm. They are amorphous in form and variable in volume, depending on the number and arrangement of locules, usually <10. There are two types: one is smooth, and the other has small protuberances on the surface which appear to be miniature buds and are often hairy giving the gall a ‘mossy’ appearance. In texture, harden and become ‘woody’ as the gall matures. Loss of the hairs on the ‘moss’ form apparently occurs as these galls mature (Taylor, unpub. data).

Remarks. The collections from the ‘smooth’ and ‘moss’ forms of the gall may be of different species of Fergusobia   —see Discussion.

Form of gall. Terminal shoot bud galls (collected from Breeza, Mudgee and Hawkesbury districts, NSW, Australia) ( Fig. 7 View FIGURE 7 A). Elliptical to sub-spheroid in shape; mature galls to 2.5 cm in diameter. In some, leaf material grows past the galled tissues. Number of locules> 10. 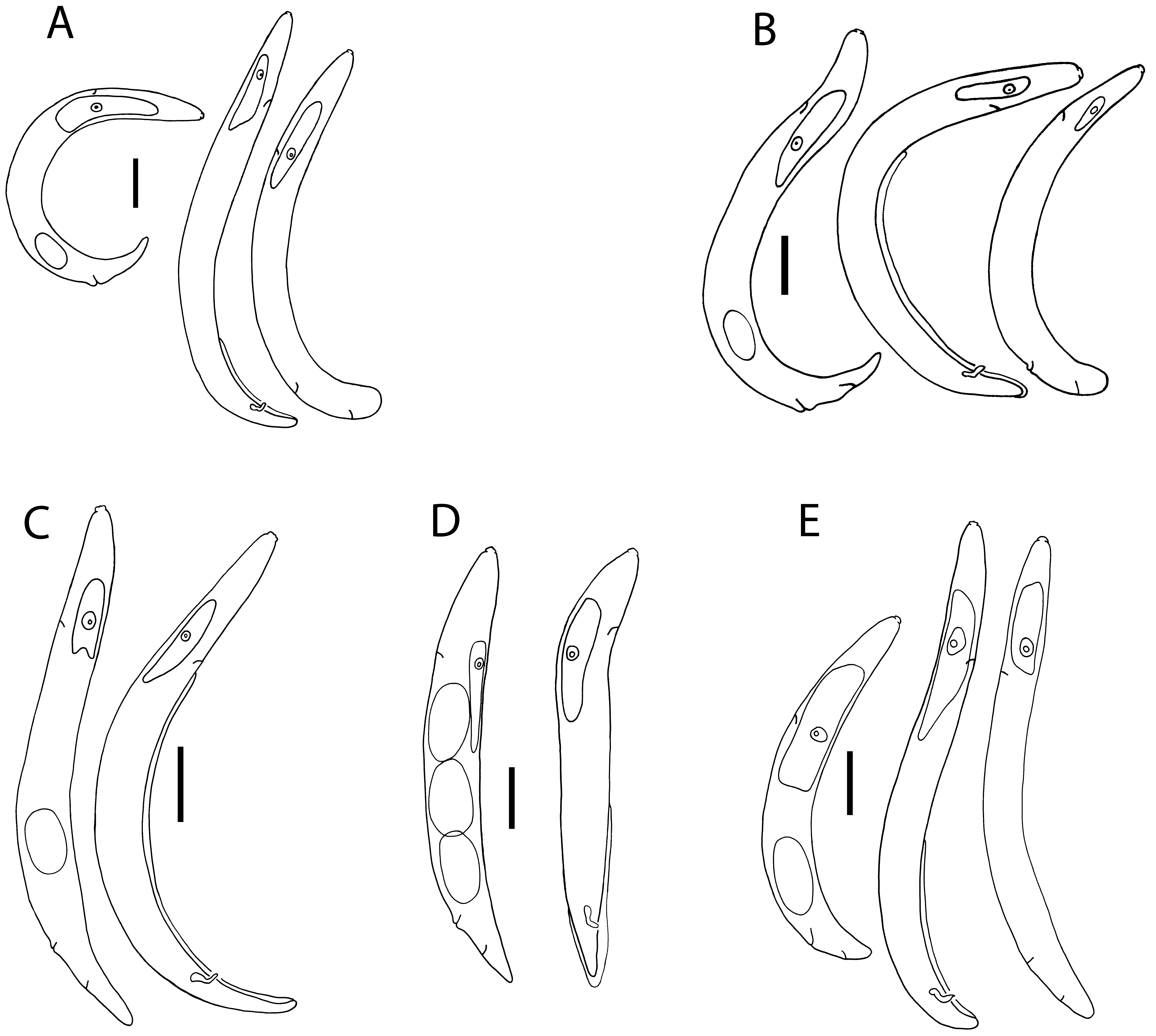 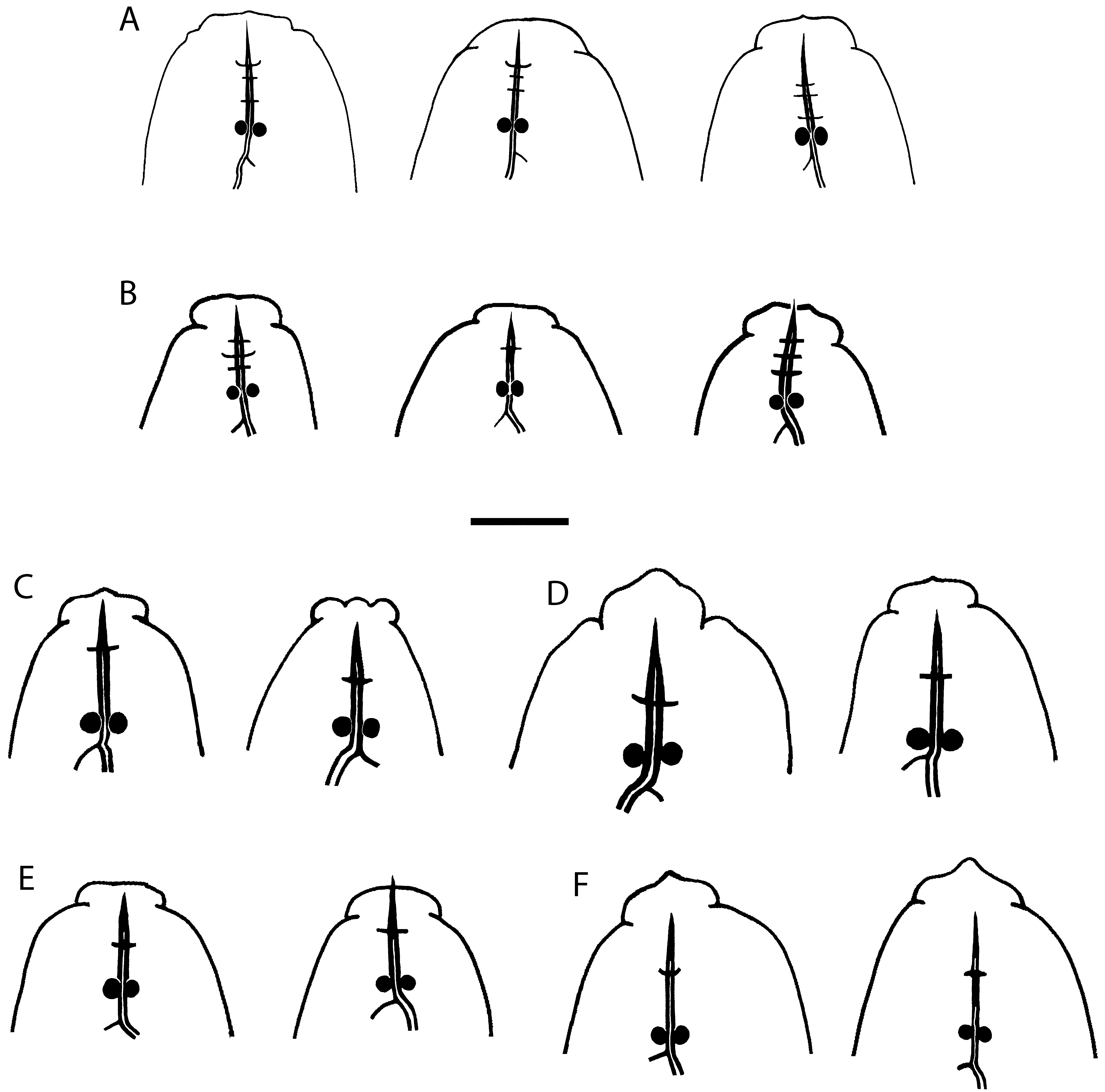 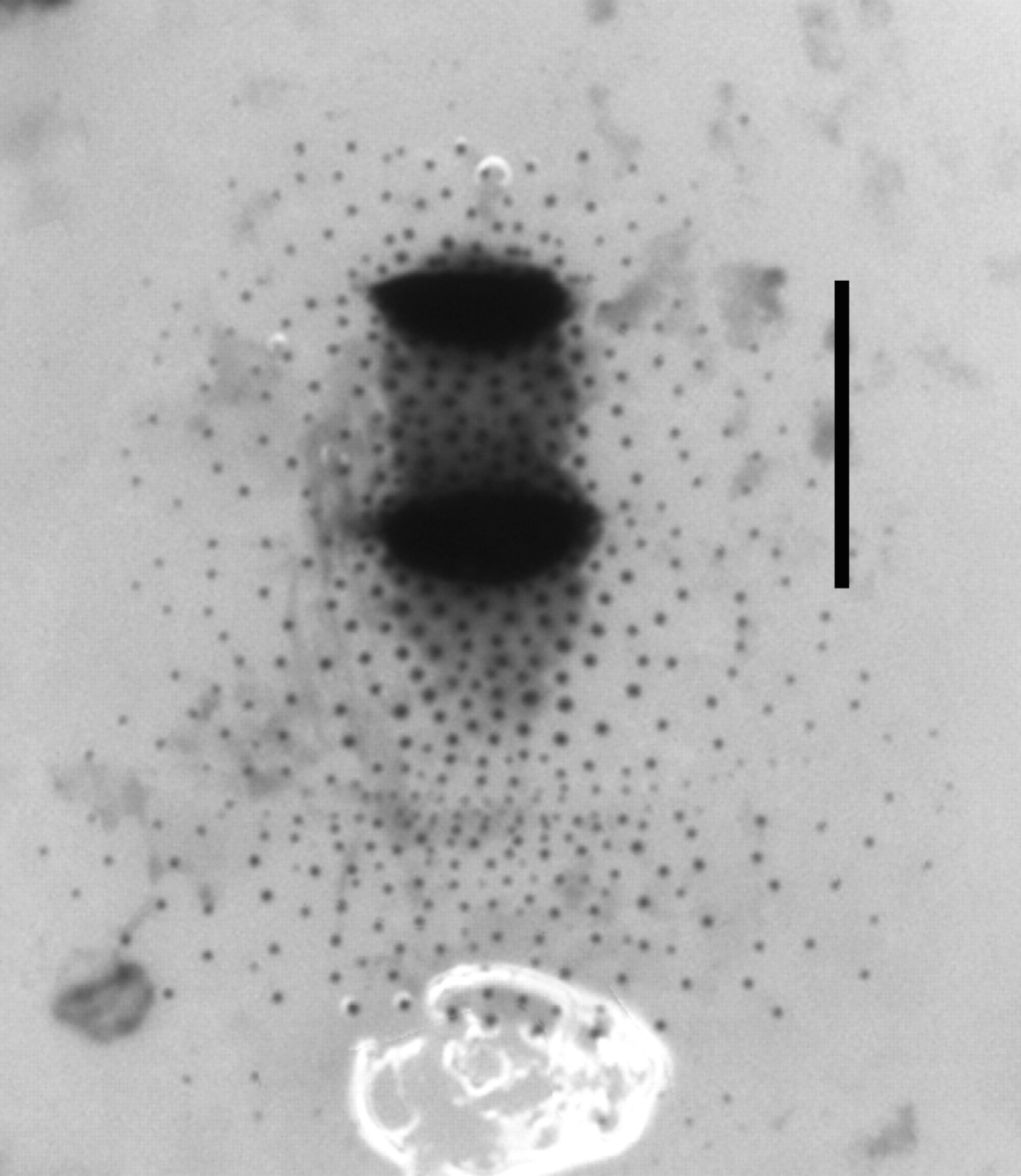