Material examined: 32 specimens, one of them is a two clawed larva.

Type repository: The holotype (slide No. 5401) and one paratype (slide No. 5402) are deposited in the collection of Binda & Pilato, (Museum of the Department of Animal Biology “Marcello La Greca”, University of Catania, Italy). The other paratypes including the larva (slides CII 59 - CII 89) are deposited in the collection of P. Fontoura at the Department of Biology, Faculty of Sciences, University of Porto, Portugal.

Specific diagnosis: Pseudechiniscus   with tiny projections on the posterior margin of the undivided pseudosegmental plate. Those projections, generally triangular in shape, are sometimes reduced into two small teeth or assume the shape of a wide protruding flap poorly developed with a central indentation; median plate 1 with a transverse fold; median plate 2 divided; median plate 3 undivided; terminal plate not faceted but with two indentations. One intersegmental platelet present on each side of the median plates 1 and 2. Ornamentation of the dorsal plates comprised of dots joined by very delicate striae. Ventral dots unjoined by striae and forming a reticular patched design. Cephalic appendages and very short filaments A, present; all other lateral, dorsal filaments, or projections, absent. Internal claws with a thin and straight spur oriented towards the claw base. No dorsal leg spines. Short papilla on hind legs present; dentate collar, absent.

All the dorsal plates have a dense and regular ornamentation comprised of dots joined by very delicate striae, which are difficult to see ( Fig. 2 View FIGURE 2 A, arrow). Dots are slightly larger on the terminal and pseudosegmental plates (with respectively c. 50 and 56 dots per 100 µm 2), dorsal portion of paired plates and posterior portion of the scapular plate. Smallest dots are present on the neck plate, anterior portion of median plate 1, lateral portions of paired plates and on the intersegmental lateral platelets. Leg plates also sculptured but striae joining the dots are not visible ( Fig. 1 View FIGURE 1 A).

Ventral ornamentation comprised of a very fine granulation (without striae joining the dots) forming transverse patches and a reticular design ( Fig. 1 View FIGURE 1 D). A wide patch is present in the head region, two elliptical meshes follow; after the first pair of legs alternate transverse patches of dots and transverse bands of mesh are present; in some bands all the meshes are elongate in shape, in other bands two large roughly triangular meshes are also present.

Cirri A very short, 18.7 µm long; adjacent clava 4.8 µm long ( Fig. 1 View FIGURE 1 A, arrow e). Apart from the triangular projections of the pseudosegmental plate, all other lateral or dorsal cirri, or any other kind of projection are absent.

Remarks: The quantitative and qualitative characters of the paratypes are similar to those of the holotype ( Tab. 1 View TABLE 1 ), but a degree of variability concerning the shape of the posterior margin of the pseudosegmental plate must be stressed. Most specimens (64 %) have two triangular projections, as in the holotype ( Fig. 1 View FIGURE 1 B), which can be reduced to two very small teeth; other specimens (32 %) have the posterior margin slightly projected forming only one wide protruding flap, sometimes with a very soft median indentation assuming the shape of two rounded lobes ( Fig. 1 View FIGURE 1 C), Only one paratype (4 %) has the posterior margin of the pseudosegmental plate without any kind of projection.

Differential diagnosis: According to Kristensen (1987), two main groups of species can be distinguished within the genus Pseudechinicus Thulin, 1911: the ‘ victor group’ composed by species with trunk cirri and the ‘ suillus   /conifer group’ with species characterised by the absence of trunk cirri. Pseudechiniscus santomensis   sp. nov. clearly belongs to the latter.

Within the ‘ suillus   /conifer group’, six species have the following five important characters in common with P. santomensis   sp. nov: absence of lateral papillae, presence of projections at the posterior margin of the pseudosegmental plate, scapular plate with a transverse fold, terminal plate not faceted, and cuticular ornamentation comprised of dots joined by striae. Those taxa are: P. b a r t k e i Węglarska, 1962; P. quadrilobatus Iharos, 1969 c   ; P. spinerectus Pilato, Binda, Napolitano & Moncada, 2001   ; P. gullii Pilato & Lisi 2006   , P. pilatoi Li, 2007   and P. yunnanensis Wang, 2009   . In addition, we must stress a problem regarding P. novaezeelandiae   ( Richters, 1908 a). The nominal subspecies of this species has lateral papillae, but in the subspecies aspinosus, described by Iharos (1963), these are lacking. In the description of P. novaezeelandiae   , and all the subspecies, striae joining the cuticular dots were not described but we noted that they are present, even if very faint, in a specimen from New Zealand (see Pilato et al. 2005). Unfortunately we were not able to examine the subspecies aspinosus and therefore we may only hypothesize that it has cuticular ornamentation similar to that of the nominal subspecies. If the hypothesis is true, P. novaezeelandiae aspinosus   would also have the five characters indicated above, and therefore we have included a comparison of P. santomensis   sp. nov. to this subspecies. Pseudechiniscus santomensis   sp. nov. differs from P. bartkei   , P. quadrilobatus   , P. gullii   , P. pilatoi   and P. yunnanensis   in having the median plate 2 divided; more dense cuticular granulation, and less visible striae joining the dots ( Fig. 2 View FIGURE 2 ). In addition, it does not have the raised margins of the cuticular plates, which are present in P. gullii   , P. quadrilobatus   and P. p i l a t o i; the median plate 1 is divided by a transverse fold, unlike P. bartkei   , P. quadrilobatus   , P. pilatoi   and P. yunnanensis   ; spurs are present on the internal claws, absent in P. gullii   , P. quadrilobatus   , P. pilatoi   and P. yunnanensis   ; and the new species has a different ventral ornamentation to that seen on P. bartkei   , P. gullii   , P. quadrilobatu   s and P. yunnanensis   (in the description of P. pilatoi   no information was supplied regarding the ventral cuticular ornamentation). Pseudechiniscus santomensis   can also be distinguished from P. bartkei   in having the pseudosegmental plate undivided and only one intersegmental platelet lateral to the median plates 1 and 2; from P. gullii   as the pseudosegmental plate is undivided and with two marginal lobes instead of only one, and the absence of a dip between scapular plate and median plate 1; from P. quadrilobatus   as the pseudosegmental plate has two marginal projections instead of only one; from P. pilatoi   as the pseudosegmantal plate is not divided and has two marginal projections instead of only one, plus the terminal plate has two indentations (n.b. the description of P. pilatoi   does not note presence or absence of intersegmental lateral platelets, which may also be a distinguishing character); and from P. yunnanensis   as the terminal plate has two indentations and lateral platelets are present.

P. spinerectus   is the species most similar to Pseudechinscus santonensis   sp. nov., but the new species differs in having the pseudosegmental plate undivided; the marginal projections of this plate less developed and never erected; lateral longitudinal folds absent in the scapular and paired plates; only one intersegmental platelet lateral to the median plates 1 and 2; striae joining the plate dots slightly less visible ( Fig. 2 View FIGURE 2 A and E); dots on the legs not joined by striae, and some differences in the detail of the ventral cuticular ornamentation. In addition, P. santomensis   sp. nov. differs from P. spinerectus   in having shorter buccal cirri (external and internal cirri 12.8 µm and 9.4 µm respectively (holotype) and 14.5 µm and 12.1 µm long respectively ( P. spinerectus   specimen 135 µm long)); in having shorter cirrus A (<20 µm long in P. santomensis   sp. nov. and> 32 µm in P. spinerectus   ); shorter papilla of hind legs (c. 2.2 µm in the new species and c. 3.0 in P. spinerectus   ).

It is interesting to note that some authors (e.g. Dastych, 1984; Kathman & Dastych, 1990; McInnes, 1995; Miller et al. 2001) ascribed to specimens of Pseudechiniscus suillus   the ventral cuticle with small dots forming a reticular design and, with the exception of Miller et al. (2001), also a dorsal sculpture comprised of dots joined by very delicate striae. However, they also stated that this kind of sculpture seems to be characteristic of localised populations. This kind of cuticle sculpture is not usually observed in populations of P. suillus   , and is not mentioned in descriptions made by taxonomists of high reputation (e.g. Dastych, 1984; Maucci, 1986) with light microscope (phase contrast) or scanning electron microscope ( Schuster et al., 1975). According to McInnes (1995) with whom we agree, those specimens do not belong to P. suillus   but to different species. For this reason we think superfluous to compare P. santomensis   sp. nov. with populations belonging to undetermined species. 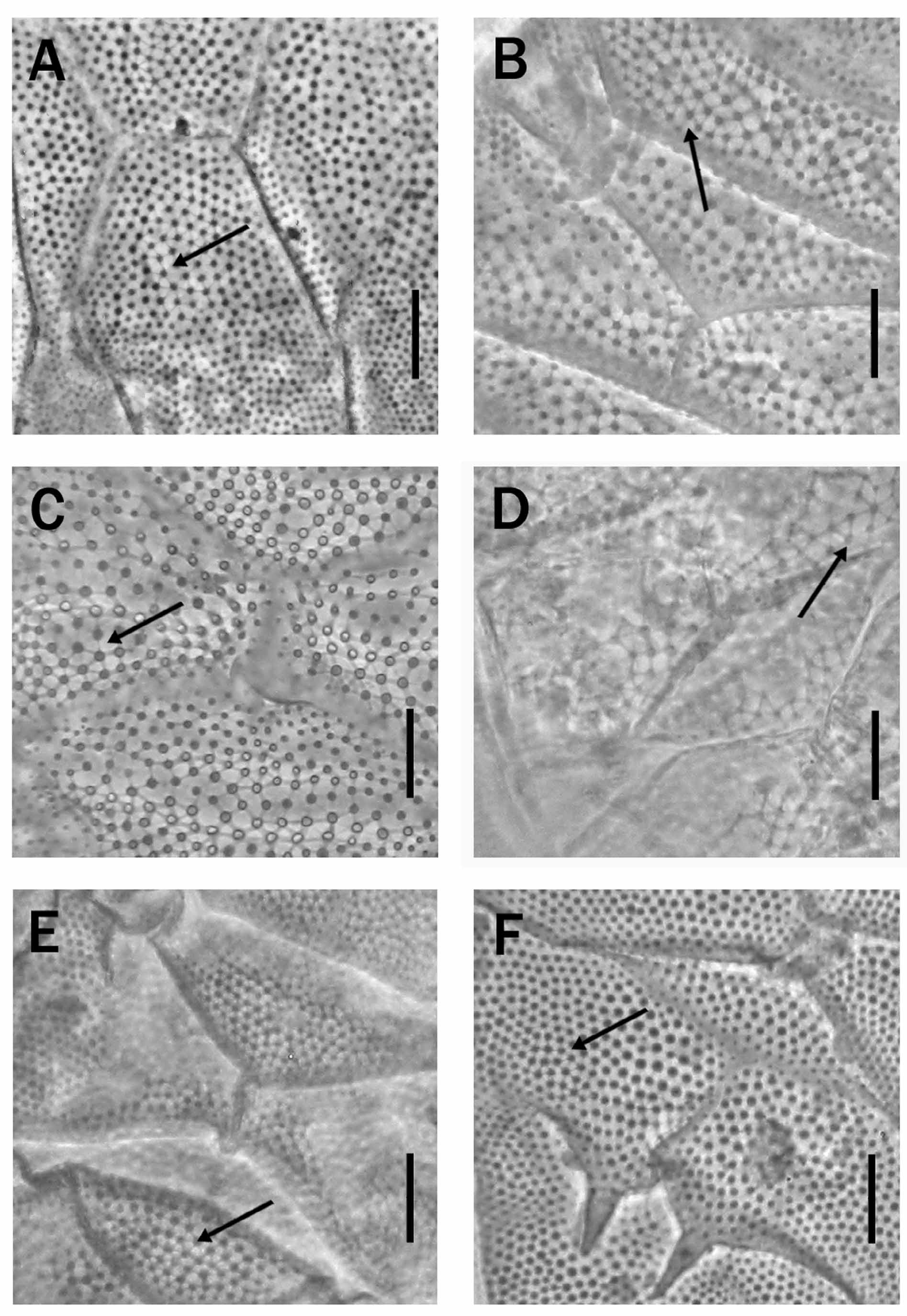