Cook (1895) described P. parae  from a single specimen from the state of Pará, but without a specific location. Attems (1938, p. 64) considered the species as incertae sedis, and Jeekel (1963, p. 101) mentioned as its possible synonym Parastenonia aurae  , due to a presumed overlapping distribution and a concordant description of both species an opinion also expressed by Hoffman (1977b, p. 354).

Based on the examination of the type specimens of both nominal species, the identical shape of the cyphopods ( Figures 5View Figure 5 (b,c) and 6(c – f)) suggests indeed their synonymy. In addition, presumably the exact type locality of the material gathered by Cook corresponds to the coastal area of the state of Pará (the same for P. aurae  ), mainly due to the easy access and by a long history of naturalist expeditions ( Schubart 1947)  . Therefore, P. aurae  is proposed herein as a junior synonym of P. parae  .

Body rings. Fragmented and many parts of body missing. Integument with small tubercles and with a transversal groove on the metazonite; alignment of paranota straight; paranota divided laterally into three lobes: pro with usually three large processes; meso with two large processes except when the ozopore is present; meta usually with two processes. Sternite without modifications.

Gonopods. Gonopods ( Figure 6View Figure 6 (a,b)): gonopod coxae (Cx) dorsally elevated, equivalent to more than half the length of the telopodite and prominent in ectal view. Coxae with several setae in the distal dorsal side and several small bristles on the ventral side. Without a coxal apophysis. Prefemoral region long. Prefemoral process (PfP) wide, narrow in the final portion, branched at the base, with a shorter secondary process with the edge denticulated ( Figure 6View Figure 6 (b)). Femoral region branched at the base. Acropodite process slender and acuminate. The solenomere is the largest process carrying the seminal groove that extends until the apical part; elongated and broad. Gonopore and gonopod aperture on seventh body ring missing.

Known only from Aurá, Ananindeua, state of Pará, Brazil ( Figure 11View Figure 11 (a)). 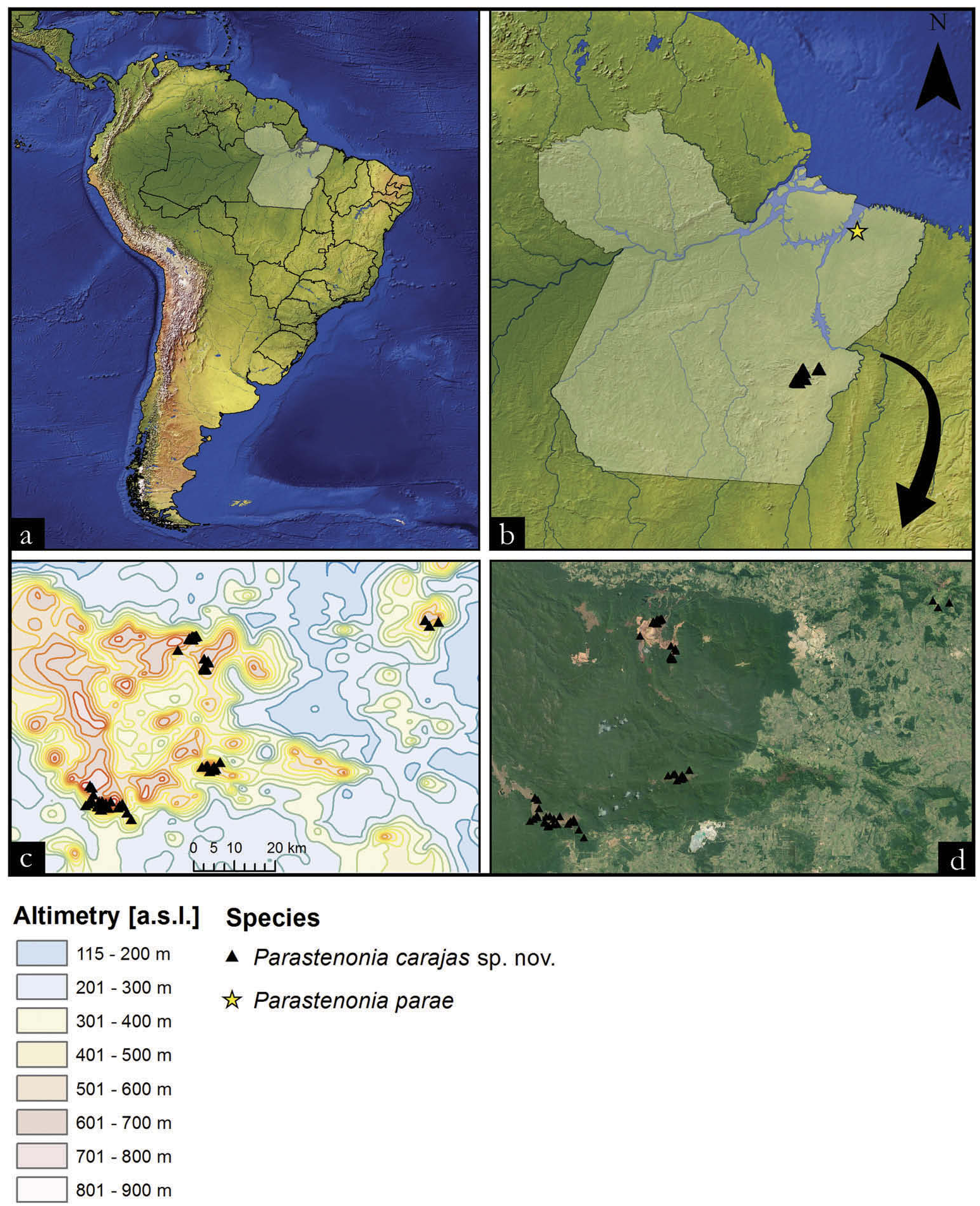 Figure 11. Distribution map of Parastenonia parae and P. carajas sp. nov.: (a) South America; (b) Northern of Brazil. Pará state highlighted in grey; (c) Iron-ore outcrop in the Pará state; (d) Satellite image of the iron-ore outcrop where the caves were sampled.