Description. Colonies growing in tangled masses, composed of upright (though rather flaccid) stems, up to 12 cm high, arising from creeping, branched, tortuous hydrorhiza generally firmly attached to barnacle shells. Stems monosiphonic throughout, wiry, slender, composed of proximal, smooth, athecate part of varied length, and an upper, thecate part divided into regular internodes by means of slightly oblique nodes, the latter becoming gradually more distinct distally. Thecate part proximally devoid of cladia, but provided with a row of frontal, saccate nematothecae and/or followed by internodes with atrophied cladial apophyses and nematothecae. Junction between acladiate and cladiate parts of the stem either indistinct, or marked by a deeply incised, strongly oblique node (hinge joint), or comprising a prosegment (delimited at both ends by hinge joints) carrying frontally a saccate nematotheca. Regular internodes of the stem short, with a proximal, frontal, saccate nematotheca, a latero-distal apophysis supporting a cladium, the latter flanked by two saccate nematothecae with gutter-shaped, adaxial apertures; apophysis with a well-developed, latero-frontal, conical mamelon with circular aperture on summit. Young stems unbranched, older stems with up to second order branches; the latter irregularly replacing a hydrocladium; branches given off from front of stem either singly or in alternating pairs from two (rarely three) consecutive internodes of the upper part of main stem; structure similar to that of the main stem. Cladia alternate (the two rows forming an obtuse angle between them), closely-set, up to 12 mm long, composed of a regular succession of up to 35 cormidia separated by well-marked, slightly oblique nodes; cormidium short, accommodating a hydrotheca of the same length, together with its three associated nematothecae: one mesial and a pair of laterals; two intranodal, conspicuous (though incomplete) septa, dividing the internode into three, almost equal parts. Hydrotheca cup-shaped, slightly elongate, lower half of abaxial wall bearing a moderately-long mesial nematotheca, upper half concave, with thickened perisarc; adaxial wall slightly concave, giving rise (from the insertion point of the proximal intranodal septum) laterally to a pair of perisarcal processes running obliquely upwards into the hydrothecal lumen, each forming a globular projection, but not a transverse septum uniting the lateral walls of the hydrotheca between them; aperture slightly sloping, composed of 9 triangular cusps, one abaxial and 4 pairs of lateral, the last pair mostly hidden by the lateral nematothecae; mesial nematotheca reaching half-length the hydrotheca, aperture gutter-shaped, opened adaxially all the way long; lateral nematothecae saccate, imperceptibly projecting above the hydrothecal rim, apertures gutter-shaped on adaxial side. Hydranths contracted within their corresponding hydrothecae; tentacles filiform, their number could not be ascertained. Colonies dioecious; male and female gonophores formed inside ovoid gonothecae with flimsy perisarc, protected together by elongate corbulae, the latter replacing irregularly a cladium, either singly or in alternate, consecutive pairs; a normal cormidium at the base of each corbula. Male corbulae cylindrical, up to 5 mm long, open, composed of up to 15 regular ribs per side, arranged alternately along a straight rachis; a nematotheca in the distal axil at the insertion of each rib on the axis; ribs free, curving above the gonothecae, occasionally fused punctually at their tips and/or at some sites where they touch each other laterally; ribs triangular in general outline, each free side with a row of 9–10 nematothecae. Female corbulae arched in overall outline, up to 3.5 mm long, closed, composed of up to 14 regular ribs, except for the proximal most pair that are distinct; regular ribs arranged alternately along the corbula axis, with a distal, axillar nematotheca at their basal insertion; each rib asymmetrical, proximal half sheet-shaped, distal half set with a row of 12–14 nematothecae; the junction between adjacent ribs takes place along a continuous line at the base of the row of nematothecae; proximal-most ribs forming a pair fused basally together, one rib being free from the corbula (except for its origin on the axis), while the other is fused in its center to the first regular rib of the corbula; these ribs are bilaterally symmetrical, and bear a row of 7–10 nematothecae on each free side; all the nematothecae of the corbula saccate, with adaxial, gutter-shaped apertures. Female gonothecae similar in shape to their male counterparts. The development of the zygote takes place within the female gonotheca, and up to 1 mm long, worm-like planulae are released from the female corbula through a passage between the proximal-most, unpaired rib and the couple of first regular ribs.

Remarks. Calder (1983, 2013) and Ansín Agis et al. (2001) discussed the nomenclature of this species. Calder (1983) confirmed the so far accepted synonymy (see Fraser 1944: 393), stating that “There is nothing in the original description of Aglaophenia rigida   by Allman (1877), or in subsequent descriptions of that species by later authors, that can be used to distinguish it from A. trifida   ”. Of noteworthy importance, Calder’s material was essentially topotypic with McCrady’s A. cristata   (D. Calder, pers. comm.). The syntype of A. rigida   was reexamined subsequently by Ansín Agis et al. (2001), as well.

The original description given by McCrady (1859, as A. cristata   ) is imperfect (e.g. the number of hydrothecal cusps is given as “eight or ten (?)”), the morphological terminology is inadequate, and there are no illustrations, making the species unrecognizable on microscopical grounds. However, a few macroscopic traits highlight its general morphology, e.g. “Main stems […] giving of, on their upper half, two or three pairs of opposite branches, and growing together in a bushy cluster […]”, and “The main stems are of a yellowish, horny brown, the branchlets lighter in color, and the tips of the branchlets have a vivid, somewhat golden yellow color” ( McCrady 1859: 202, 203). Nutting (1900: 91, 105) gave a comparatively more modern and clearer description based on McCrady’s account as, at the date of publication of his monograph, he was “unable to secure either specimens or figures of this species” ( Nutting 1900: 106).

Colonies may reportedly reach as much as 24 inches (61 cm) ( Nutting 1900: 91, as A. rigida   ). Although recognized as “the most abundant Aglaophenia   on our [ USA] Atlantic seaboard”, Nutting gave a short account on the “closed” corbula only, not stipulating that a morphologically distinct structure is build up by the opposite sex, as documented in the present study. Similarly, Allman (1877) documented only “completely closed” corbulae in specimens assigned to his newly-described A. rigida   , as equally did Vannucci (1950, as A. rigida   ) and Calder (1983).

Several species of Aglaophenia   have corbulae resembling those of A. trifida   and, among those thoroughly described, those of A. lophocarpa Allman, 1877   and A. tubulifera (Hincks, 1861)   could be mentioned ( Svoboda 1992; Ansín Agís et al. 2001).

As noted by Calder (2013), it is unlikely that this hydroid could have occurred on floating Sargassum   , as stated by Fraser (1912, as A. rigida   ), but the dredged specimens epizoic on sponge may, indeed, belong to the present species. Similarly, the Pacific material dealt with by Fraser (1938a, b, 1939, 1948, as A. rigida   ) may not belong, either, to the species dealt with herein.

Distribution. From North Carolina, USA, to Brazil, including the Gulf of Mexico and the Caribbean Sea ( Calder 2013). This is the first record from French Guiana (present study). 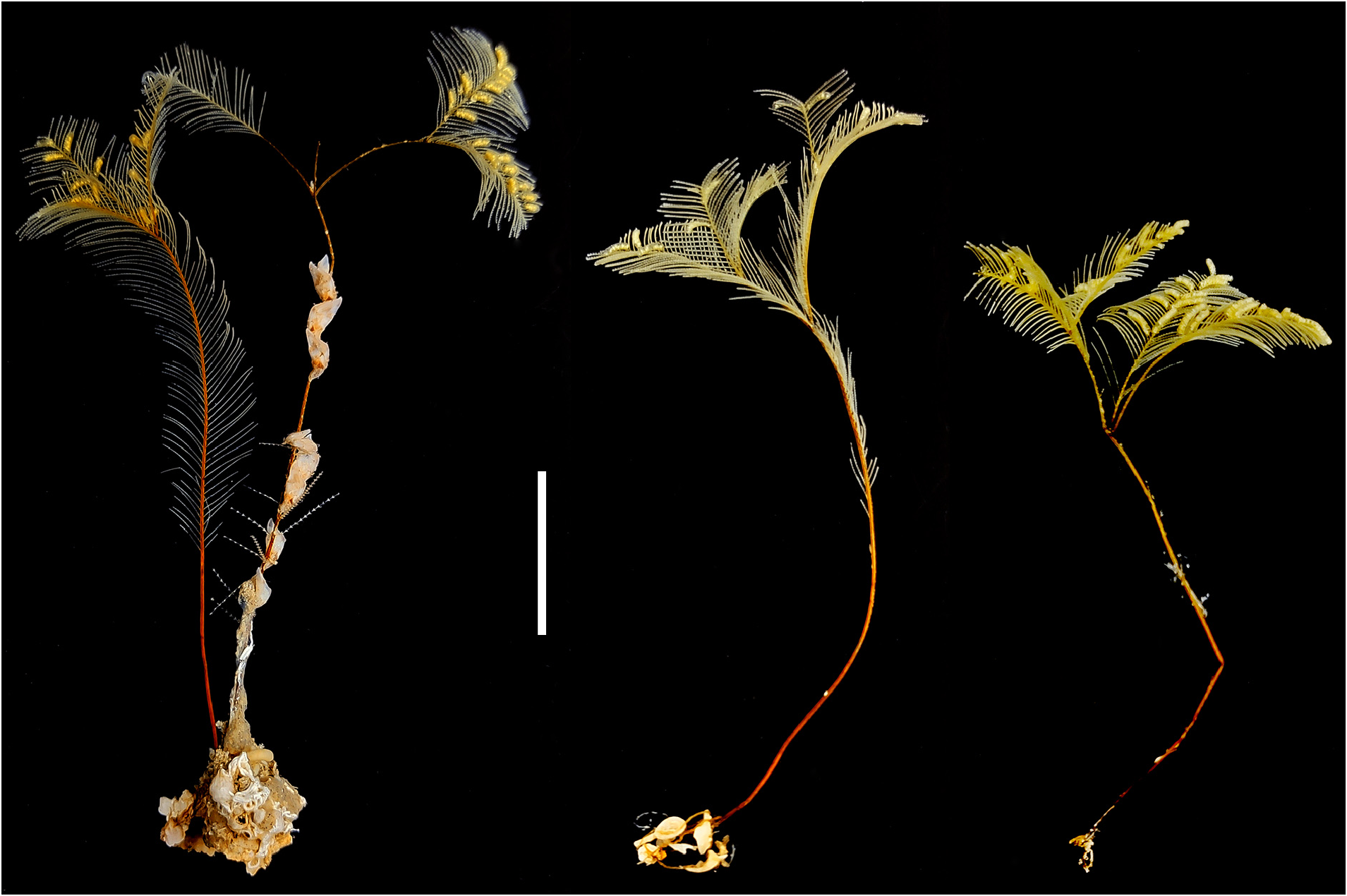 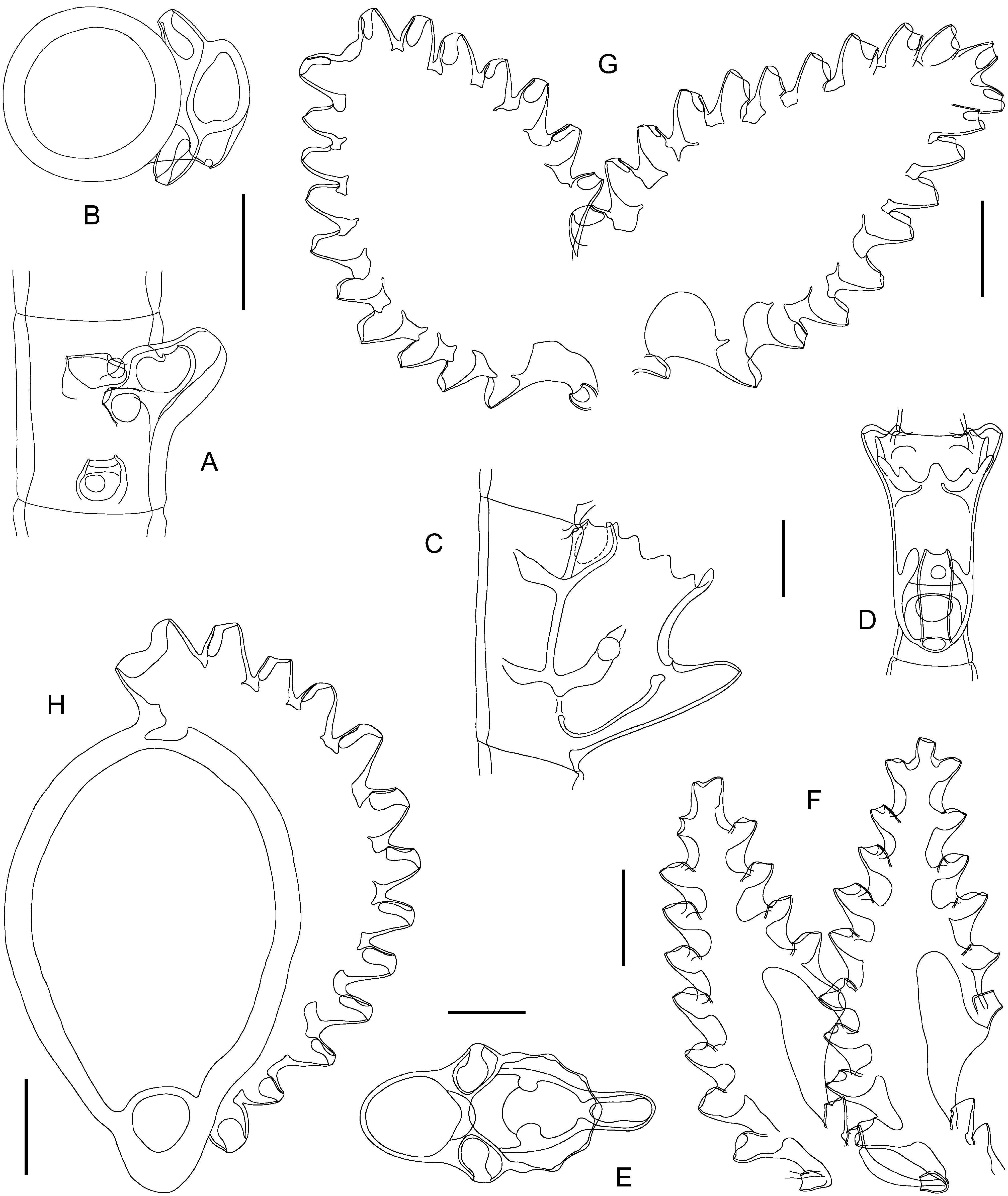 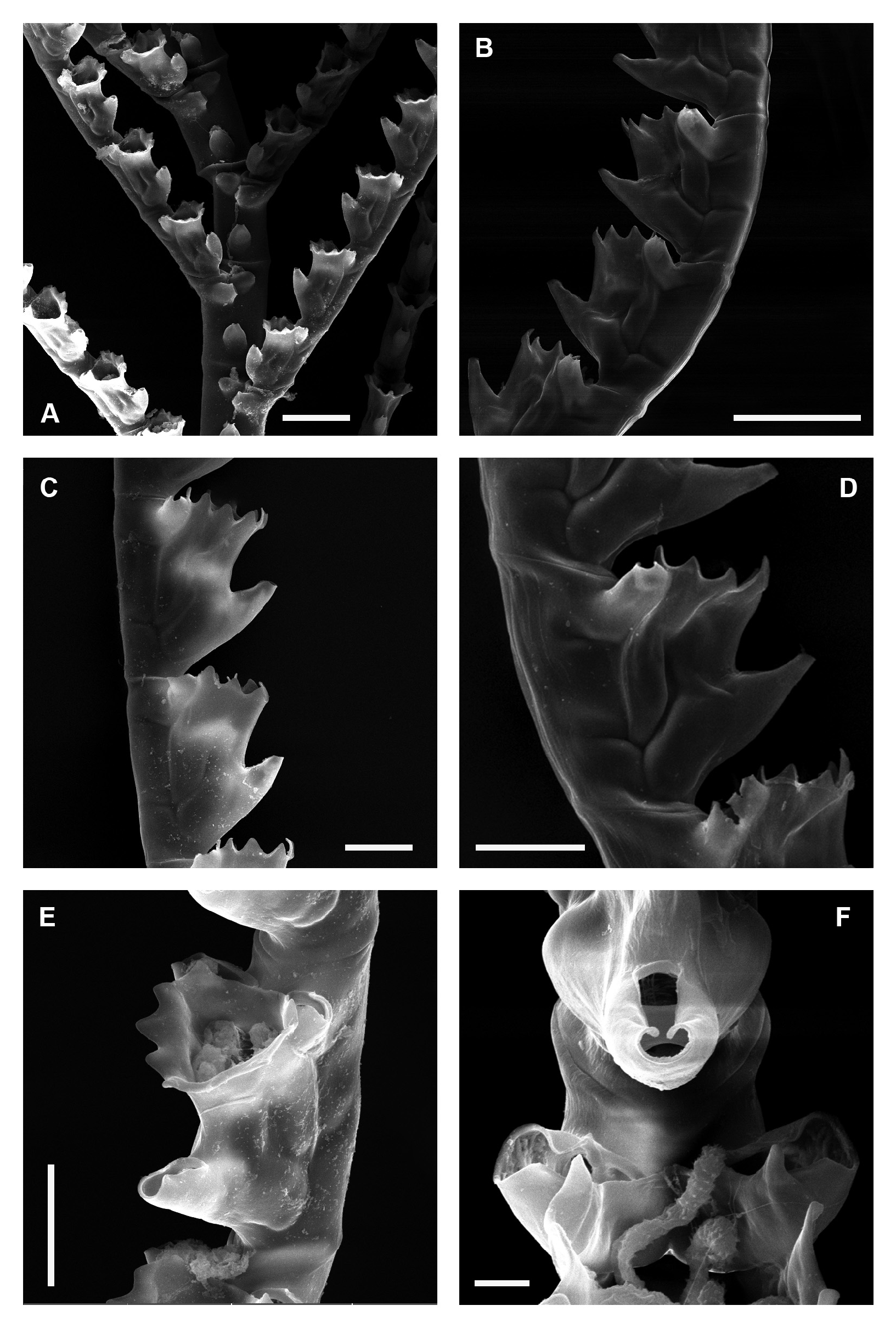 FIGURE 16. 16S rRNA phylogenetic tree showing the relationship among Aglaophenia trifida lineages. Numbers at nodes represent the BPP and BS, and are shown only when BPP ± 0.9 and BS ± 75. Newly-produced sequences are highlighted in yellow.