N.B.: In its original description ( Makhan, 2007), the genus is briefly presented and wrongly believed to be related to the genus Thiodina Simon   , a true salticoid placed within the Amycoida clade (e.g. Maddison et al., 2008). The description of the type species, S. aschnae Makhan   from Suriname, is also poor, especially concerning illustrations, and is in need of redescription. Several attempts towards examining the type specimens have not been successful. Nevertheless, some features visible in the illustrations confirm the relationship of the species described here with S. aschnae   , in particular the cheliceral teeth, femoral apophysis on male palp, spikes on the base of embolus, and front eye row much wider than the posterior.

Diagnosis: Species of this genus can be easily recognized as non-salticoids by the presence of palpal claws in females; amongst the Neotropical non-salticoids, they can be recognized by the fringe of white scales on the dorsal surface of male palpal femora ( Fig. 1 View Figure 1–2 ) and copulation openings located anteriorly on the sides of the female abdomen, closer to the pedicel ( Figs 29– 30 View Figure 29–32 ), as well as the elongate ventral spines on front legs in both sexes ( Fig. 9 View Figure 5–9 ). Compared to other lapsiines, they are small, relatively flat, and the only known leaf litter dwellers.

Description: Small, yellowish jumping spiders with slightly flattened carapace living on litter of the Amazonian rain forest ( Fig. 53 View Figure 53 ). Carapace widest at posterior eye row ( Fig. 3 View Figure 3–4 , as in Soesiladeepakius lyra   sp. nov. and Soesiladeepakius retroversus   sp. nov.) or narrower than anterior eye row ( Fig. 19 View Figure 19–21 , other species). Salticoid eye pattern. Black rings around eyes very conspicuous. Chelicera small and vertical in both sexes, with three promarginal and two retromarginal teeth ( Fig. 5 View Figure 5–9 ). No medial mound on chelicerae. Palpal femur with a ventral depression; retrolaterally smooth or with apophyses. RTA very long ( S. lyra   sp. nov. and S. retroversus   sp. nov.), medium sized ( Soesiladeepakius arthrostylus   sp. nov.), or very reduced (other species). Tegulum globular (as in S. arthrostylus   sp. nov., S. lyra   sp. nov. and S. retroversus   sp. nov.) or flattened (the other species). Embolus varying from short to long, with acute apophyses related to its base. The species lack the articulated median apophysis typical of lapsiines, but in at least some species ( S. lyra   , S. retroversus   ) there is an apophysis arising from the tegulum that could reasonably be interpreted as the median apophysis, insofar as it is placed at the pre-embolic loop of the sperm duct, which is the location of the median apophysis in other lapsiines. Other Soesiladeepakius species   have various tegular apophyses of which one could be the median apophyses, but their topographical placements are not clear. Tuft of sensitive hairs on prolateral cymbium in both sexes. Females with palpal claw ( Fig. 6 View Figure 5–9 ). No projection on male endites. Sternum drop shaped, very wide, narrowest posteriorly ( Fig. 20 View Figure 19–21 ). Strong ventral spines on leg I in both sexes ( Fig. 5 View Figure 5–9 ). Other leg spines mostly absent or very reduced. Tarsi with large, slightly asymmetrical tarsal claws ( Figs 7–8 View Figure 5–9 ). Dorsal abdomen totally covered by a large scutum in males ( Figs 3 View Figure 3–4 , 19 View Figure 19–21 ). Epigynum with anterior lateral openings, longitudinal copulatory ducts extending posteriorly, converging at the posterior border, where small spermathecae are located ( Figs 14–15 View Figure 10–15 ).

Biology: Ground dwellers living in Neotropical rainforests in which humidity nears 100% and litter is high ( Fig. S1 View Figure 1–2 ). Further information is only known for S. lyra   , as follows. While moving, males and females alternate between stationary phases, in which they wave front legs up and down, and rapid forward walking phases; jumps are rare. Females take care of eggs laid on the convex side of fallen sheathing leaf bases (and probably on the central nerve of large leaves fallen upside down) ( Fig. S2 View Figure 1–2 ); eggs are not fixed tight to each other by silk for protection, as seen in salticoids; instead, they stay loose in a very thin and translucent egg sac, similar to that seen, for instance, in species of Lyssomanes   ; number of eggs varies from 15 to 18 (N = 2). 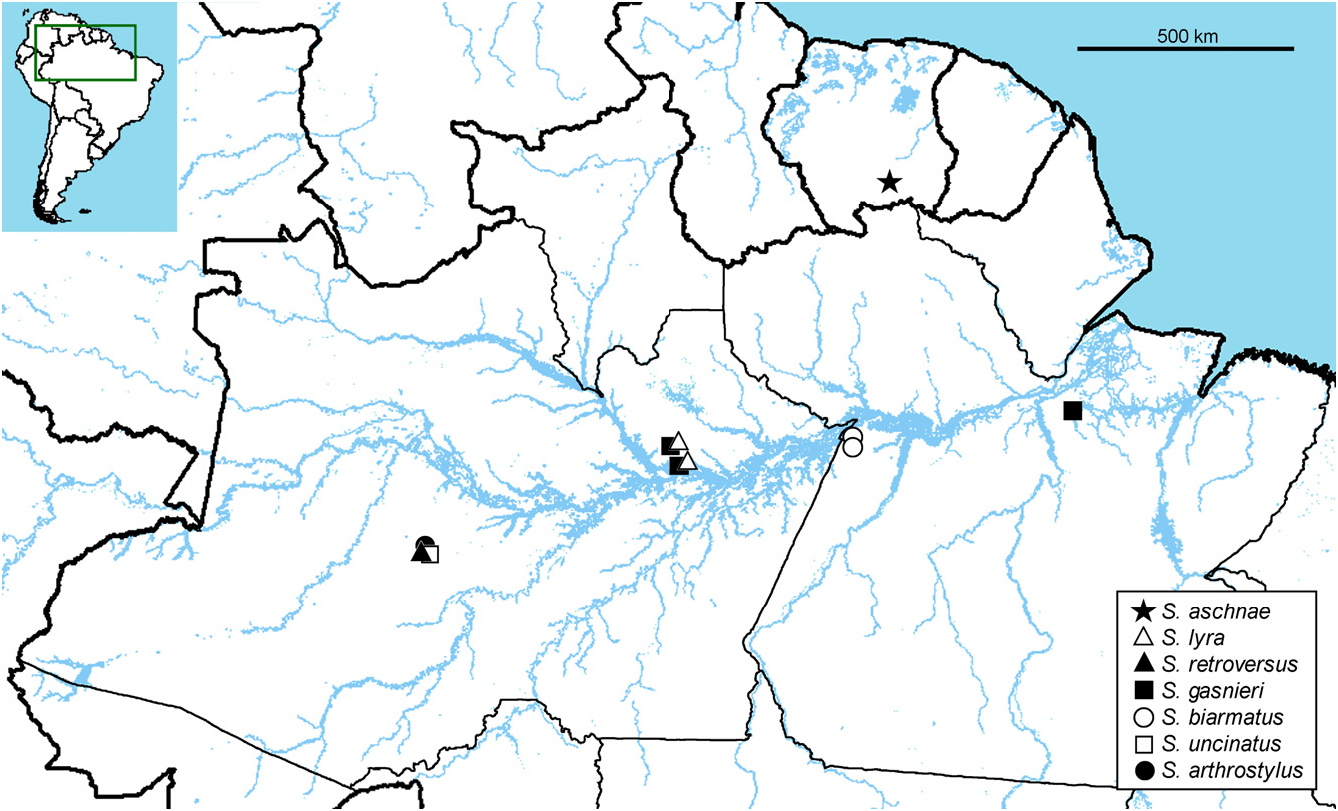 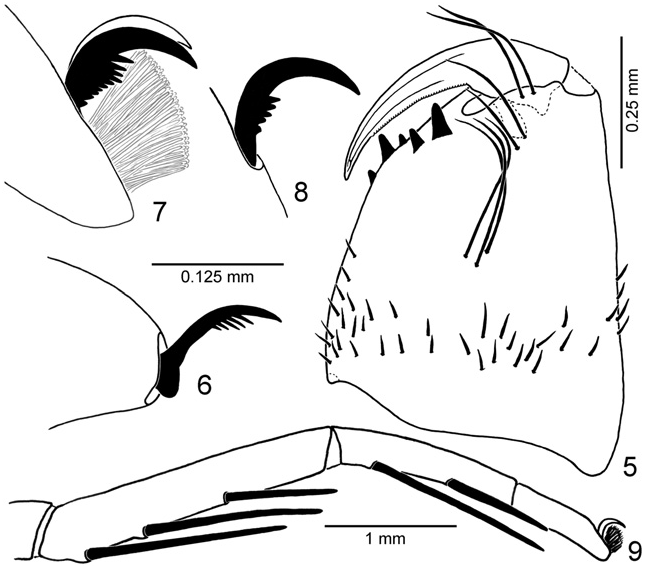 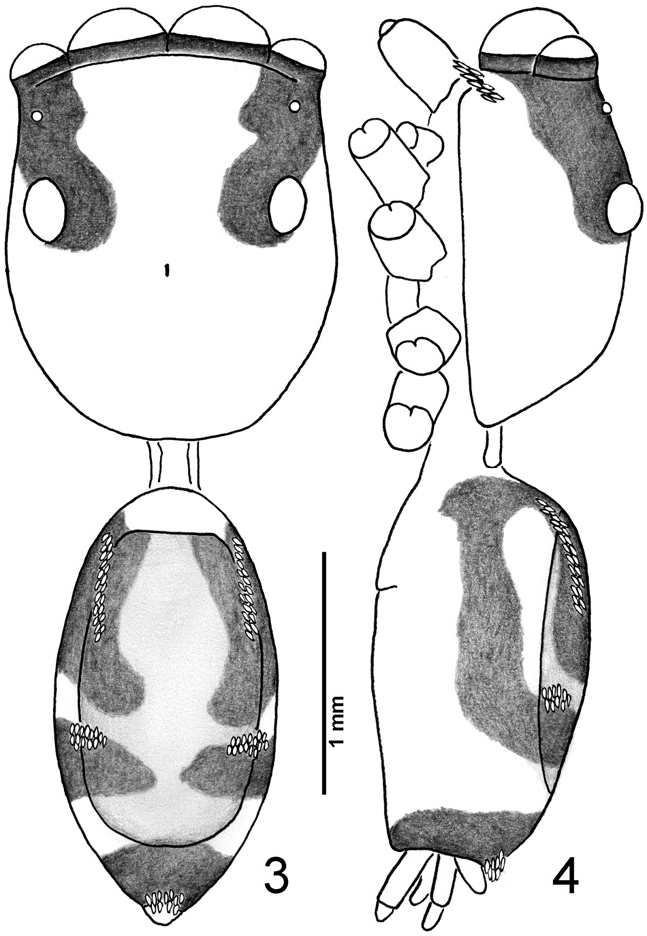 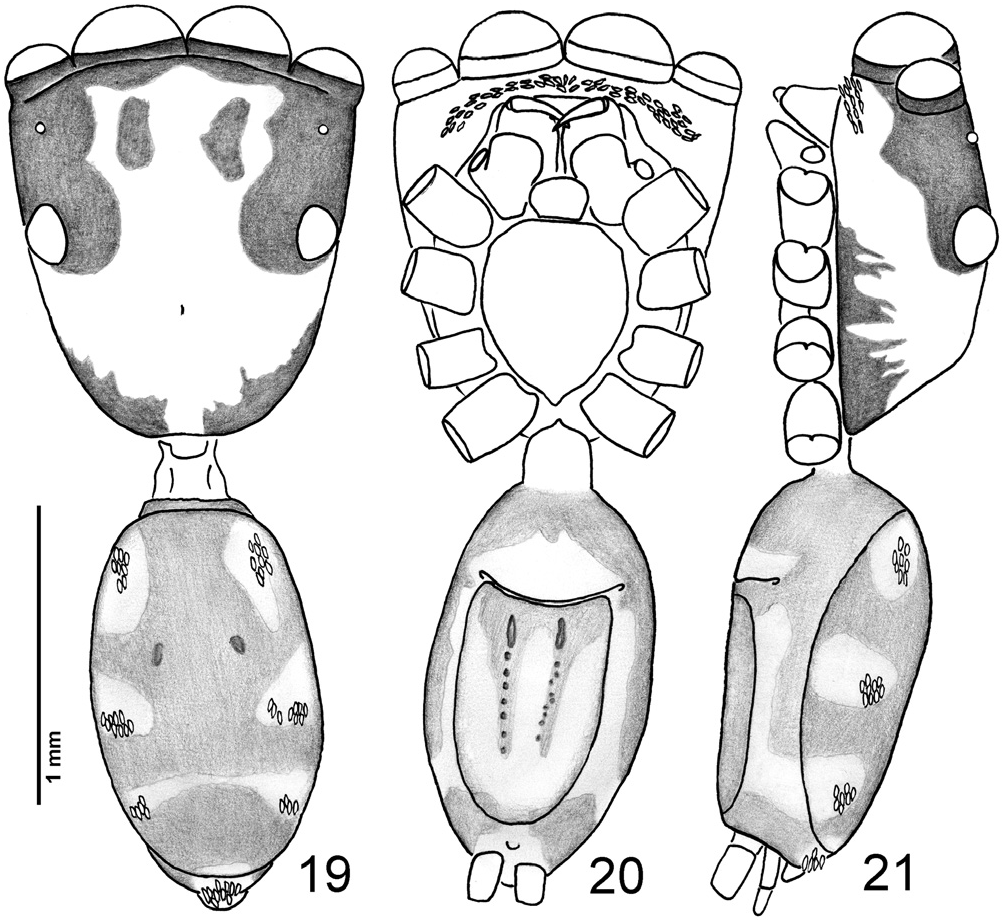